It feels like 1992 in Somerset. A towering bus is parked at the front of a packed out field with a DJ booth installed within it, and equally hefty speaker stacks are pumping out a soundtrack of propulsive beats. The feeling in the air is loose and free: people dressed in colourful clothing and eye-catching accessories wear animated grins on their faces, throwing their arms into the air and bellowing appreciation to the sky with instinctive whoops and cheers. OK, it’s not exactly a free party with tickets to Glastonbury priced at £280, but across the long weekend Block9’s new stage Genosys Sound System transports a section of the festival’s South East Corner back to the heyday of 90s rave with a back to basics focus on the party elements that matter most.

Since launching NYC Downlow at Glastonbury 15 years ago and establishing the temporary space into a queer nightlife institution to rival the best in the world, Block9 has gone from strength to strength, building its reputation for jaw-dropping production and an unbeatable late-night vibe. The creative team, led by founders Gideon Berger and Stephen Gallagher, now takes over two fields of the planet’s most renowned music festival, serving up first class bookings and often dazzling set designs, like the monumental, laser-shooting giant IICON. But its newest offering finds the sweet spot in simplicity.

Read this next: Block9's NYC Downlow might just be the best festival arena on the planet

Taking the place of Genosys — an imposing structure that looks like the lair of an aquatic villain with huge glass tanks illuminated by cold blue hues — for one year only in 2022 is Genosys Sound System. The stripped-back set-up of a bus booth, speaker stacks and open field is designed to commemorate the 30 year anniversary of the historic Castlemorton Common Festival, the UK’s biggest ever illegal rave which marked a climax for the movement after a crushing response from the establishment saw 1994’s Criminal Justice and Public Order Act effectively end ‘90s free party counterculture. 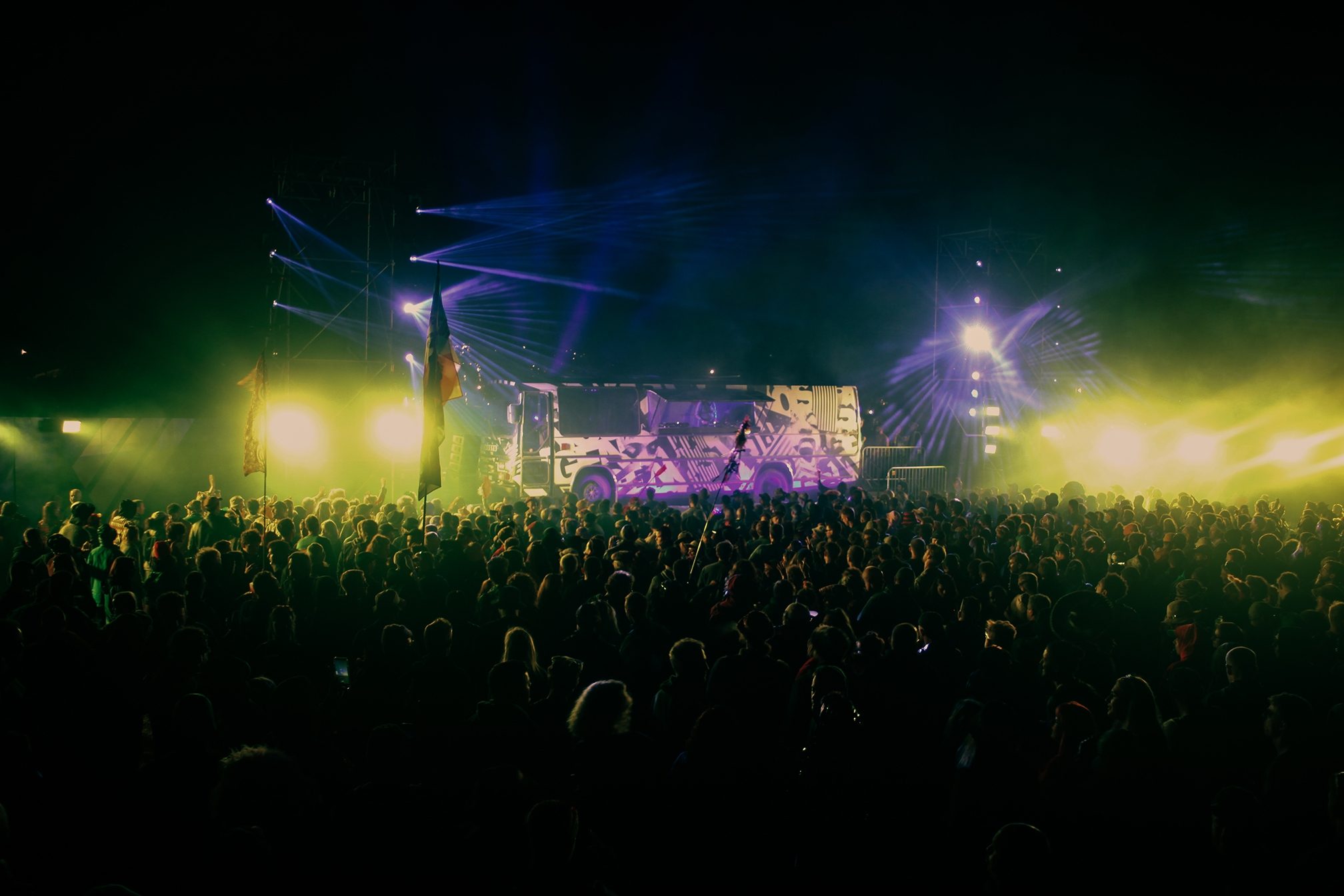 Alongside the anniversary, the timing of Genosys Sound System feels right for a number of reasons. With this being the first Glastonbury for three years following the lockdown-induced break, there’s an ecstatic atmosphere of coming together in the air. Meanwhile the parallels of institutional oppression continue to the modern day with 2022’s Police, Crime, Sentencing and Courts Act being signed into law amid widespread criticism for its tyrannical measures against the right to free protest. Genosys Sound System is a tonic, tapping into the spirit of ‘90s rave as a reminder of what dance music stands for: community, euphoria and defiance.

“It just felt right that for this year, coming out of the pandemic and with the police powers act going through parliament, that we should do something really stripped-back and minimal that honed-in on the core of what Block9 is all about,” notes co-founder Stephen Gallagher. They had purchased the bus last year from a local who used it as race car transporter, and upon realising the Castlemorton Common anniversary coincided with 2022’s return to Worthy Farm, the idea started coming together.

Read this next: "It's never too far": The inside story of Castlemorton

“We stripped out the inside, cut a DJ hatch and built a platform for the decks. We collaborated with collage artist Mark Murphy on the composition of the artwork that covers the bus. It's a mash-up of vintage protest imagery, broken ‘GENOSYS’ typography and naval 'dazzle pattern' striping. The bus was hand-painted here on-site at Glastonbury in the first week of June. The unofficial title of the painting is Make Some Noise,” says Stephen. Further assistance came from Simon Honeywill, RG Jones and DI Audio who took care of the sound, Jonny Godsmark from Production Stuff providing lighting design, and Colour Sound Experiment supplying the kit.

“Block9 was started through a ‘do it yourself’ attitude — a group of like-minded people getting together behind a common goal. Genosys Sound System honours all the people who ever got together with their mates, found a field and threw a party,” adds Stephen. “There are so many ties between Castlemorton and Glastonbury. For me, Castlemorton is symbolic. It’s not about that particular event but more about the way that the government at the time was reacting to what was happening culturally. The fact that we find ourselves in a similar situation 30 years later, with the government once again placing restrictions on our rights to gather and protest, beggars belief. Using music and art as tools of expression is a democratic right. We all have a right to make ourselves heard and our feelings known….to make some noise.” 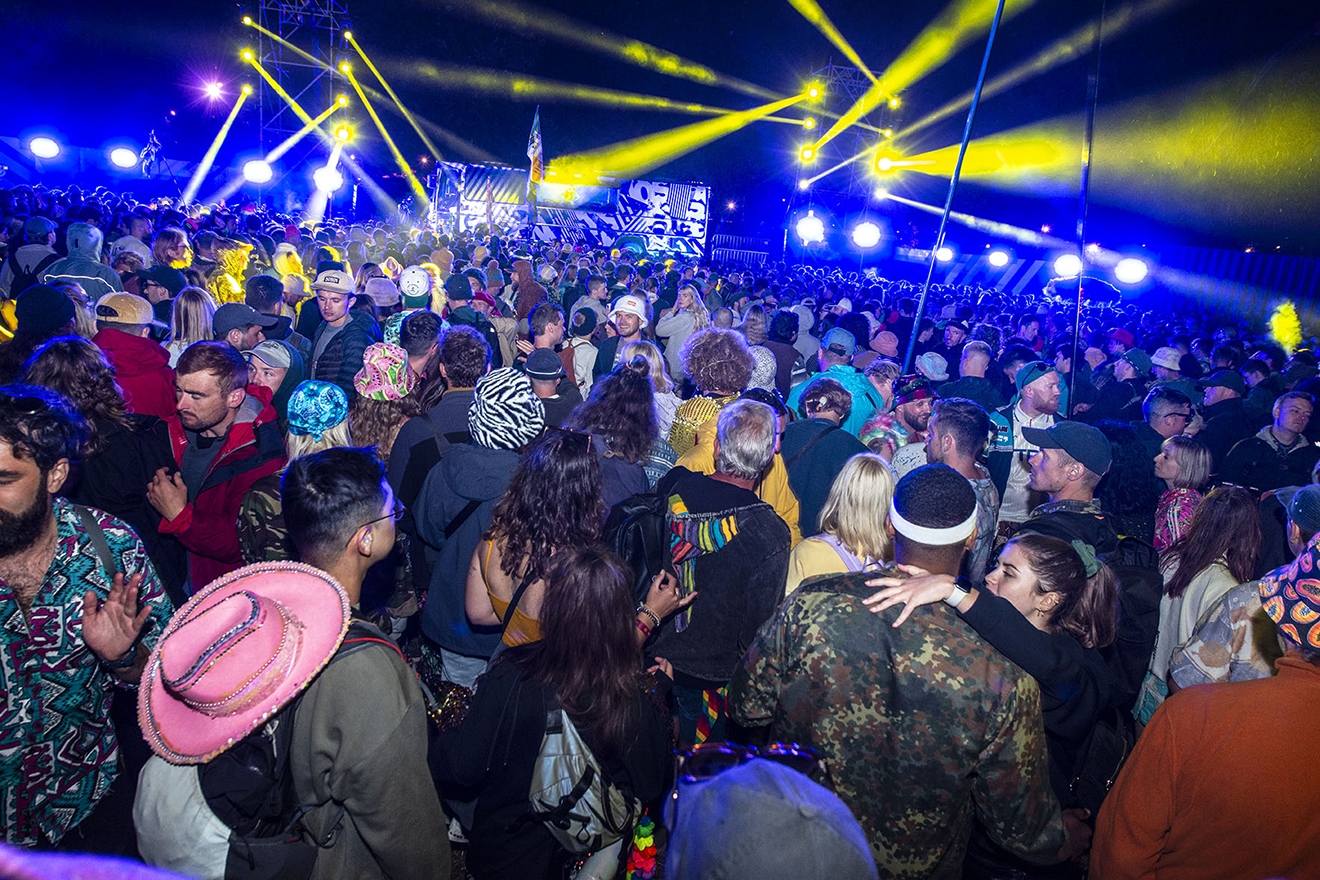 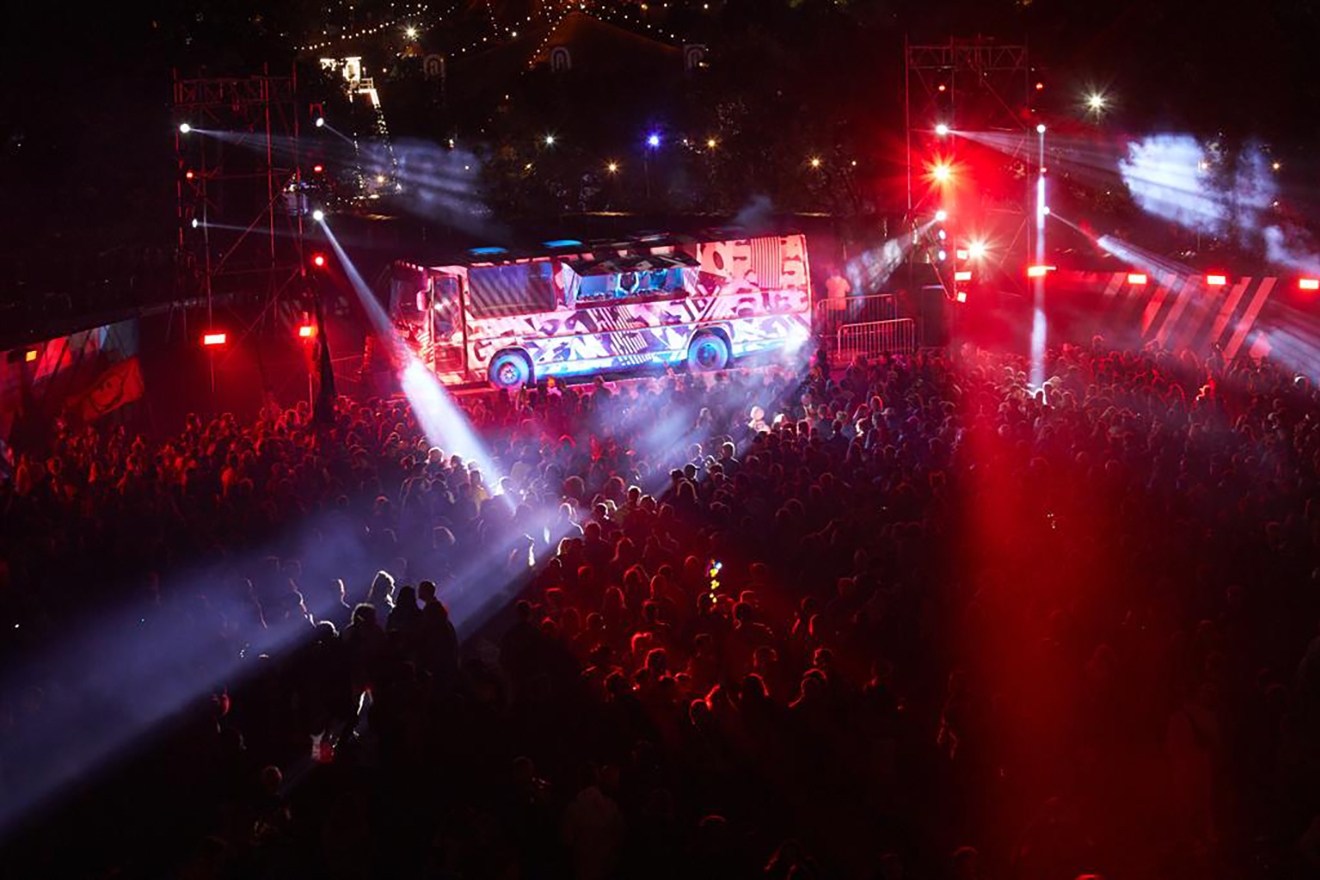 When the party gets underway, it’s emotional. “On Thursday daytime we tested the soundsystem and I actually started crying. The relief of hearing music in our fields again after such a difficult three years was so intense,” shares Stephen. Later that evening Ukrainian DJ Alinka makes her Glastonbury debut and opens the stage, arriving eight minutes before her 8:PM set time following flight delays, tears in passport control and a mad dash from the airport to site. After the stress and subsequent relief of making it in the nick of time, she settles masterfully into setting the pace for the weekend, including a sizable selection of records from the ‘90s.

“I really wanted to create a special energy from start to finish, and a lot of the music from that era has that kind of special energy,” says Alinka. “I’ve never played inside a bus before, it felt like being inside a spaceship control centre. It was really crazy seeing the crowd out of the window in front of you. Definitely an experience I’ll never forget.”

Read this next: Priti Patel used incorrect data about illegal raves to justify emergency powers for the police

“I remember when I started going to raves in the late ‘90s how free everything felt, and special, and unique. It felt like utopia even for one night,” she adds. “If you can create a place full of magical energy and spirit then you’re naturally commemorating the spirit of the parties of that era. Block9 surely succeeded at that.”

That spirit carries through the weekend as DJs old and new light up Genosys Sound System with a unifying theme of records that fuel collective hedonism. “Genosys was built to celebrate the idea of legacy - the birth of electronic dance music, the early pioneers and how their work continues to influence music today. That same idea of legacy can be seen in the way Genosys provides a platform for a new generation of artists and DJs upholding the same principles at the core of dance music both in 1992 and 2022,” says Stephen. 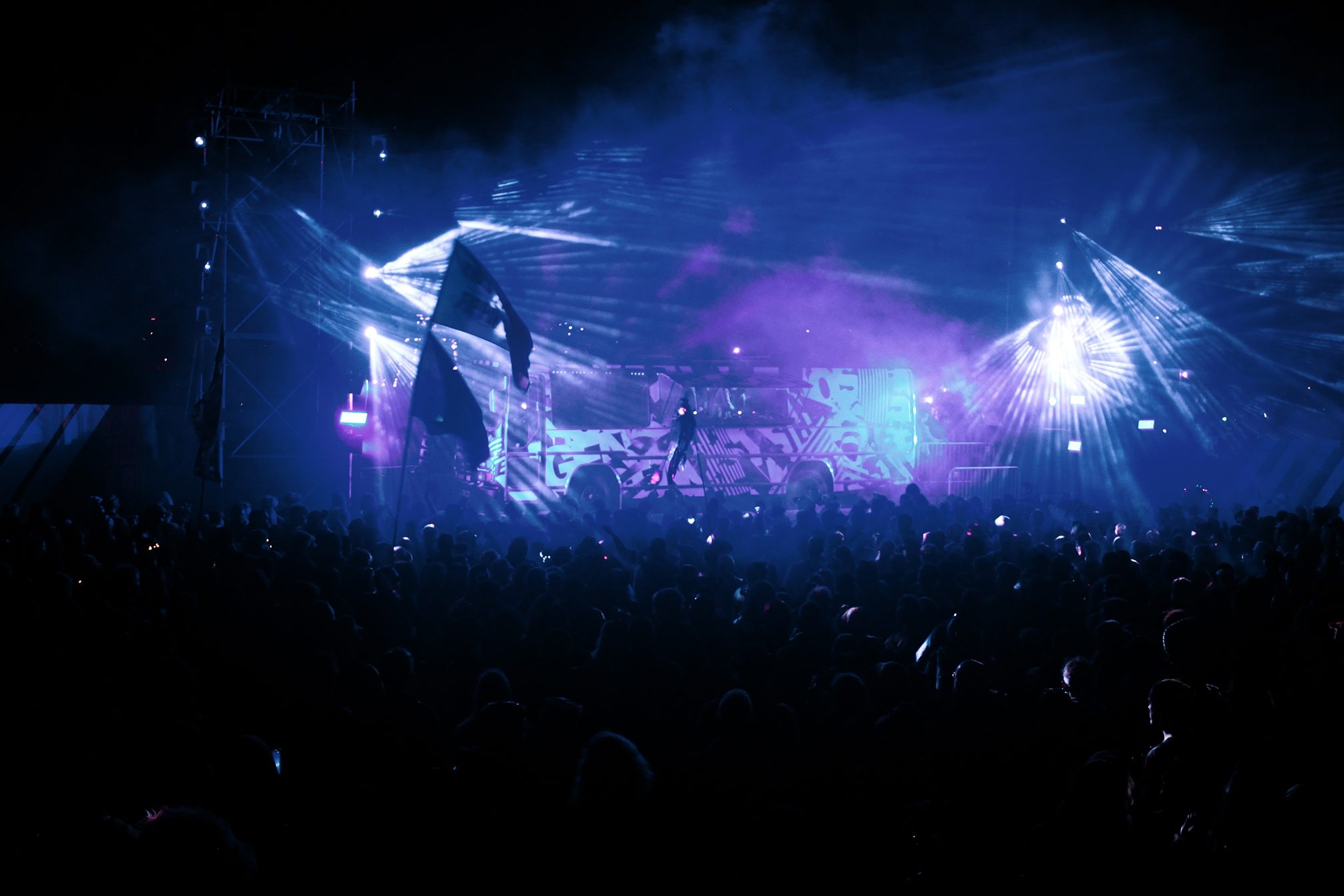 Dance System, the former Night Slugs co-head whose new project was launched to celebrate the playful energy of classic dance music, proves a perfect booking to open Friday. His set steadily builds the field from empty to bouncing with tracks from - or inspired by - the ‘90s and ‘00s, including an edit of Sandy B’s ‘Make The World Go Round’ which becomes a defining cut of the weekend popping up in sets all over the festival.

“I loved what Gideon and the Block9 gang did with Genosys this year; was so much fun to play in the bus. The free party energy was right up my street,” says Dance System, reflecting on his formative years raving in woods or the South Downs outside of Brighton in the early 2000s. OK Williams’ Saturday night set is another highlight, dipping into the ‘90s to pull out Whigfield’s school disco Eurodance anthem ‘Saturday Night’ to the delight of dancers. Newer tracks she plays are fuelled by old skool influence, from Special Request’s haywire ‘Wallabies’ to Beyoncé’s new Robin S.-sampling single ‘Break My Soul’. 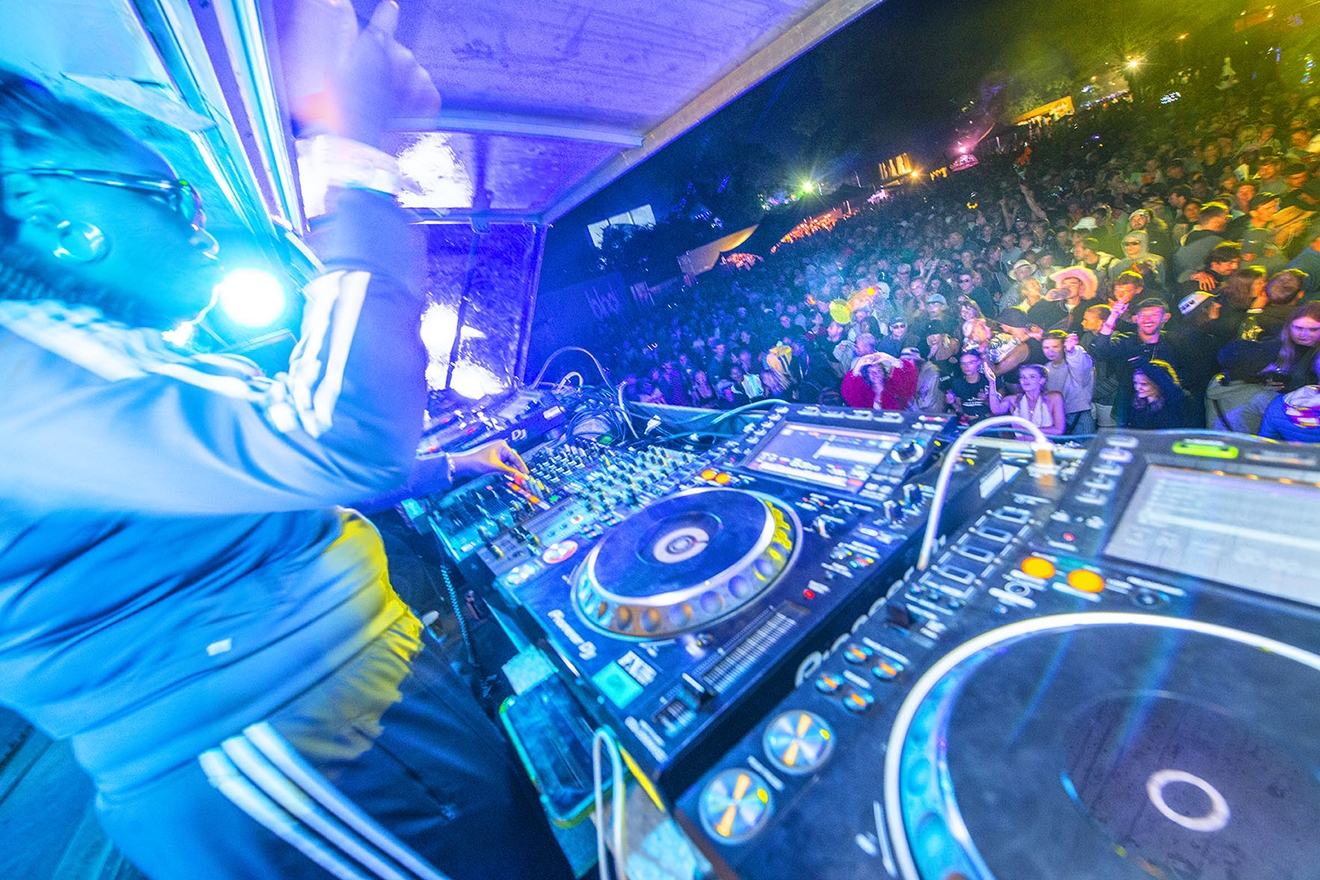 One of the headline bookings of the weekend is Para, who played with Spiral Tribe at Castlemorton Common back in ‘92. “Having that very direct connection was important,” says Stephen. “For me it also really pushes that point about how we find ourselves in a very similar situation with the government taking a heavy-handed authoritarian stance in the face of resistance and protest against their draconian policies. 30 years later and it seems as though nothing has changed.”

Read this next: How oppressive policing has eroded rave culture

“It’s always important to look back to learn and see how we can make things better in the future,” reflects Dance System. “The spirit of Glastonbury, and in particular Block9, is the closest you can come to the energy of [the ‘90s free party era] and it’s so inspiring. There is so much freedom and joy and we need to bring that back into raving today. The big corporate festivals are sucking the soul out of dance music. We, as artists, promoters and DJs, need to take control back and take things a little bit more DIY.”

By skilfully weaving together the past and present, Genosys Sound System is a triumphant and timely production that reflects the high standards Block9 always hits. It’s euphoric while simultaneously making a thoughtful statement that ties into the festivities organically, setting an example for what festivals should aim to achieve: have so much fun it makes you dream of a better world.