If Glastonbury's Block9 was once the cool spot you heard about through a chain of whispers, it's now the place people are screaming in your face about. Funnily enough, this is - in part - due to a gigantic faceless head, in the form of IICON, lying in Block9's newly-added field. The pre-festival hype surrounding the late-night area in Glasto's South East corner grew thanks to the mystery of the new structure, described beforehand as "colossal" and "epic in scale". Walking around the site on Thursday, we quickly realise this is no exaggeration. The blazing late afternoon sun shines on this mammoth sculpture - dormant and silent - ahead of a weekend that'll see it awaken and become one of Glastonbury's most-talked about attractions.

We've said before that Block9's NYC Downlow is one of the best festival arenas around - it still is - but it's now got a challenger in the shape of its giant Block9 counterpart. "One of the things that IICON is about - and what is terrifying - is our ability to consume music as if it is a commodity provided to entertain us on a streaming service and overlook music, and what it actually is, and what it actually means," Block9 co-founder Gideon Berger told us in the days leading up to the festival. "It’s an art project that, hopefully, is going to be more than just your average music arena at a pop festival." You've got nothing to worry about here, guys.

Thursday starts at the Downlow's Fetish Party, bringing together welcoming 'Fuck Packs', barmen in BDSM gear and sweaty, tops-off bodies squeezing into the two cages on the dancefloor as Dungeon Meat (Brawther and Tristan Da Cunha) roll out mischievous basslines and, later, New York duo The Carry Nation bring feel-good, floaty house and a touching play of Cassius' 'Feeling For You' in tribute to the late Philippe Zdar. Then, after sets at IICON from Raggs, Batu and Dan Habarnam, one half of UK duo Raime has the pleasure of taking the new arena through to the early hours of Friday morning.

Seeing the DJ stood behind the booth in the huge tilted box gives a real indication of how grand this thing is. Trippy red-blue-green woven visuals flash behind him and blue lasers shoot into the crowd as he plays a set intertwining between growling grime instrumentals and rumbling garage. Brotherhood's 2001 garage track 'Small Step' sounds more mean than usual on the ambisonic 6.1 soundsystem - with speakers in each corner of the field - and the lyrics sampling Neil Armstrong's words as he landed on the moon make so much sense given IICON's otherworldly appearance. The field's probably less than half full - a slight dampener for atmosphere - but the festival's not at full attendance yet - it's the first night after all - and it's apparent the following night for Zenker Brothers that IICON has nothing to worry about in terms of bringing in punters. The Ilian Tape founders have no trouble settling in, giving the soundsystem a hammering with their trademark jungle-breaks-techno workouts as the word 'IICON' in snow white flashes on piled shipping containers either side of the main structure, which switches from aquarium blue to deep purple throughout the set. The lasers alone are a show themselves, pointed towards the sky and flickering in Domino effect. Daylight - and, obviously, the fear - approaches at 3.50am, before Stenny takes over to continue the breaks-induced techno rollout, only this time with ravers - and the likes of Shanti Celeste and Peach - playing skipping rope games and doing the limbo. The surreality of things like this is why Glasto is so amazing.

A packed out field for Larry Heard's live set with keyboardist Paul Cut and vocalist Fatima on Saturday goes to show this is - albeit unofficially - IICON's headline set of the weekend. Even the flags associated with Glasto's bigger stages are waving in the air. Heard, backed by psychedelic visuals, works through his catalogue that contains the acid-leaning 'Sun Can't Compare' and soulful cuts like his Club Mix of 'Just Another Lonely Day' and his Space Mix of Club Ice's 'Manhassett'. Hearing pure house music on such an epic stage is fucking wonderful. Standing towards the back of the field, though, it's difficult to hear Fatima's vocals as it seems they're only being transmitted through the front speakers. This being the only downside of what's otherwise a mesmerising set.

We take a quick pit stop at Genosys for some wonky techno and jungle from HAAi, before returning to IICON for a Hessle Audio showcase. Ben UFO, Pangaea and Pearson Sound take it in turns to dish out techno varying from the trance-y stuff all the way to the beefed out, bass-leaning cuts. A breaks edit of Happy Mondays' 'Hallelujah!' even makes its way into the mix. Flickering of orange computer coding within IICON's box reflects the idea of the stage being reactionary "to the terrifying new realities emerging in our digital, data-driven, post-truth age." 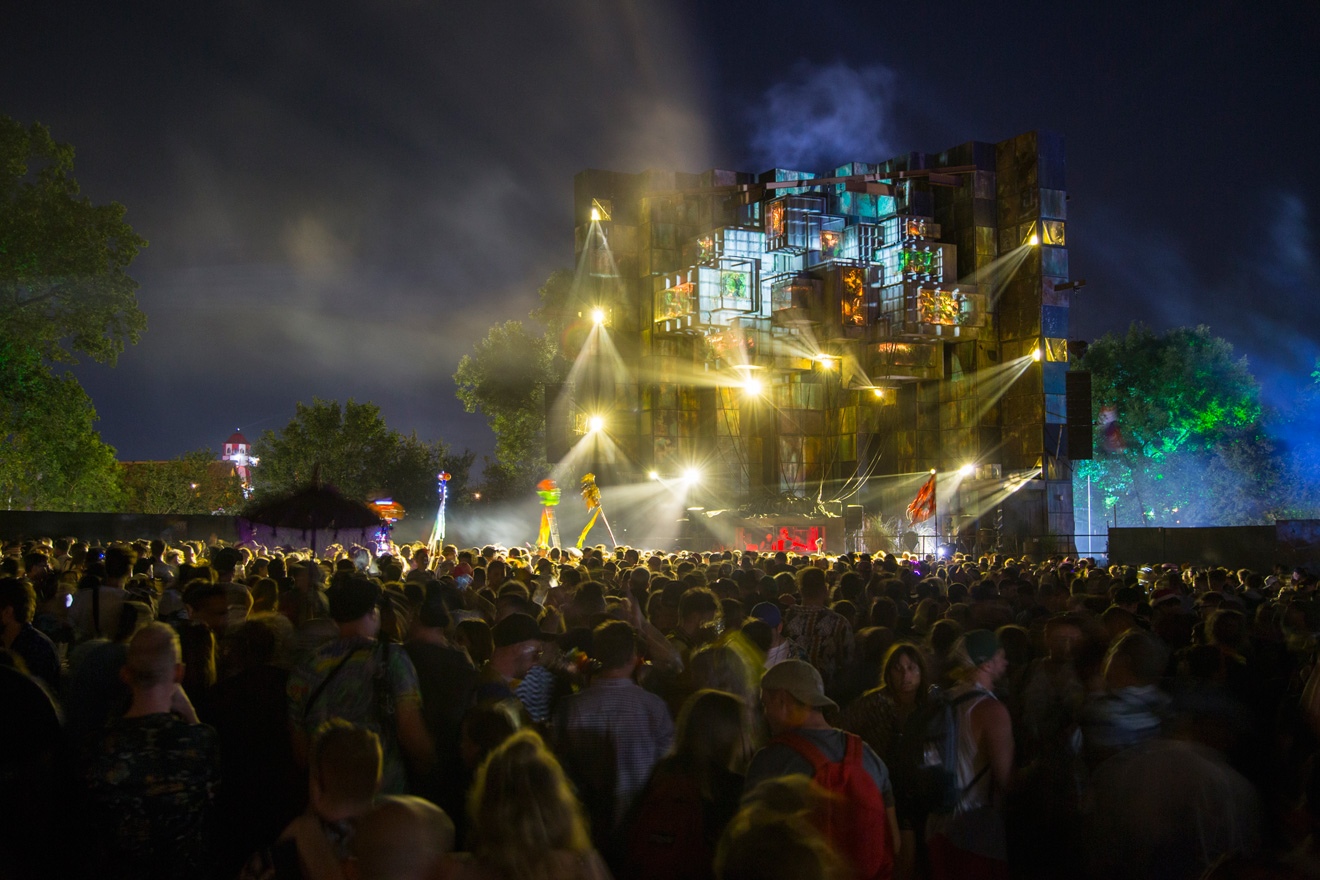 IICON's experimental ethos continues on Sunday with sets from Karenn, Lee Gamble, Hodge, CCAI and Freakenstein, but the NYC Downlow's the place pinned on everyone's map tonight, especially with whispers of a performance from Miley Cyrus - who performed earlier on the Pyramid Stage - going round. It was confirmed to us, then we heard it was cancelled 45 minutes before due to security issues. Still, punters in Block9's 24-hour bar Maceo's are adamant that Kylie Minogue will pop in as a replacement. She doesn't. A-list performance or not, the queue for the Downlow snakes all the way up to the road leading into Block9, the longest we've seen before, ahead of tonight's party marking the 50th anniversary of Stonewall, the LGBT charity set up following the Stonewall riots led by New York's gay community in 1969. It's a touching moment when drag performer Jonny Woo pays tribute to the gay community who have passed away. "We know you're looking down on us," he announces, before praising the NYC Downlow. "When you come in here, it's a special place," a statement backed by the half-naked builders, big-bellied men in bear suits and drag performers parading on stage behind him. "Not everybody has the liberation we have here," he adds, echoing Gideon's words a week before that "there’s a fucking shit tonne of places where you can still be hung or stoned to death [for being gay]." The Black Madonna, in a draping tie-dye T-shirt, and Chicago counterpart Garrett David then press play on a raucous back-to-back that features only the weightiest of house music. Everyone brings their A-game in here. 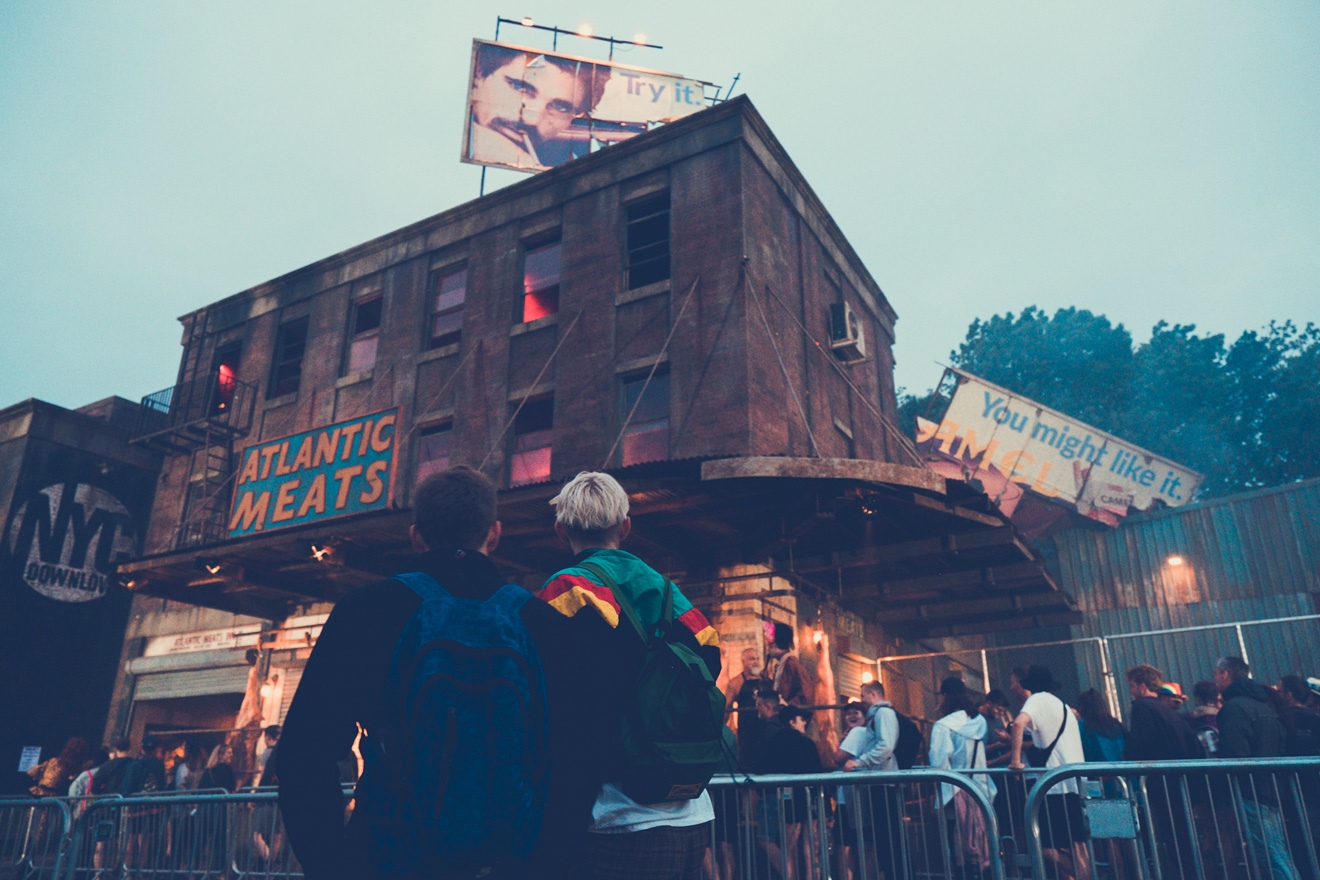 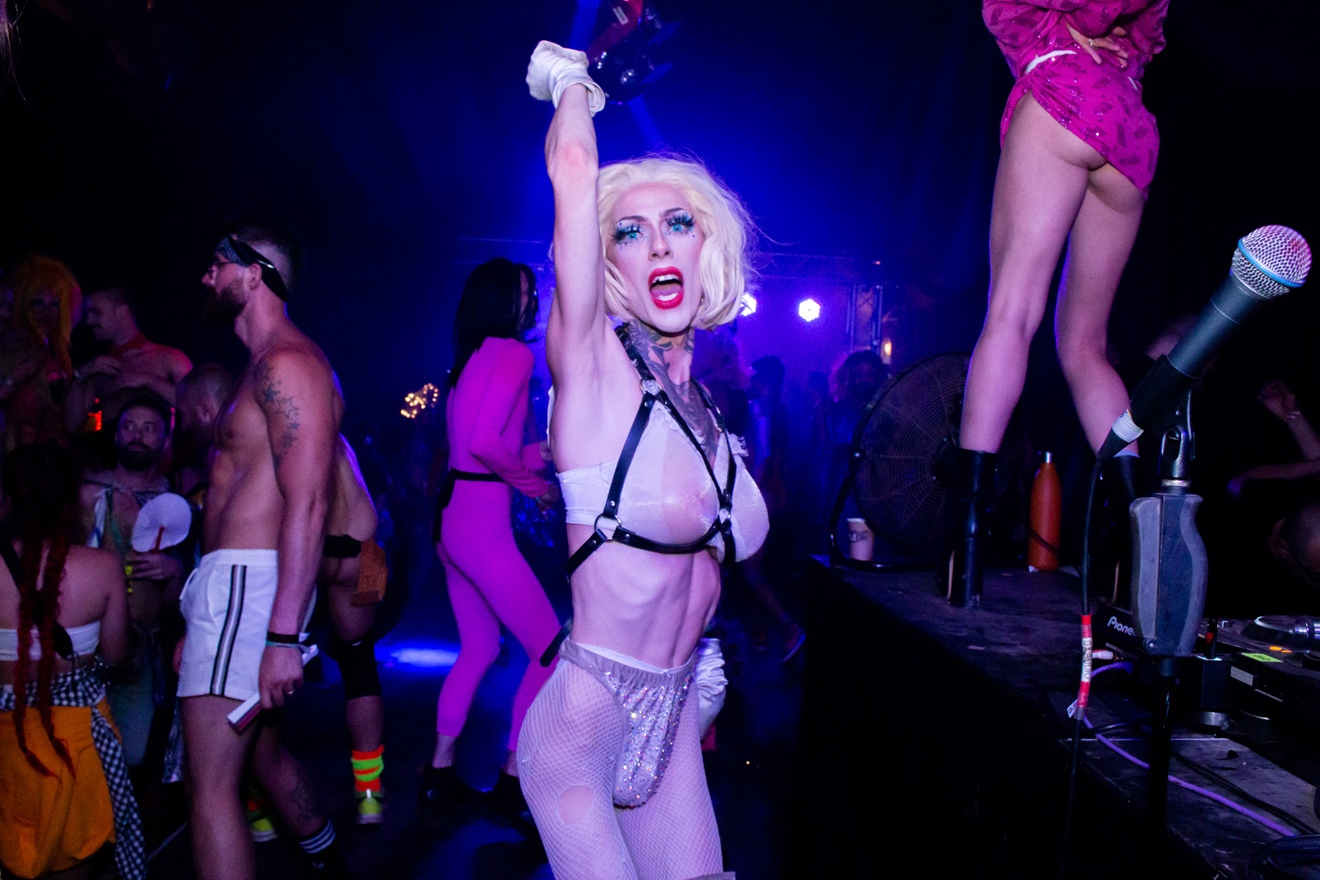 There's time for one last look at IICON as the minutes tick away towards the end of another Glastonbury. The lasers flick and spin in choreographic ways to rival Janet Jackson's performance earlier in the weekend, and the visuals lighting the rested head make us wonder about a digital dystopian world many predict. If this is it, bring it on. In a weekend that brought an iconic performance from Stormzy on Glasto's main stage, it's totally fitting the festival's late-night corner has its own IICON to be lauded over.

Stormzy at Glastonbury: A pulsating yet touching set from the UK star
Was 2019 the most environmentally friendly Glastonbury ever?
The hedonistic beauty of Glastonbury's Block9 in 13 photos