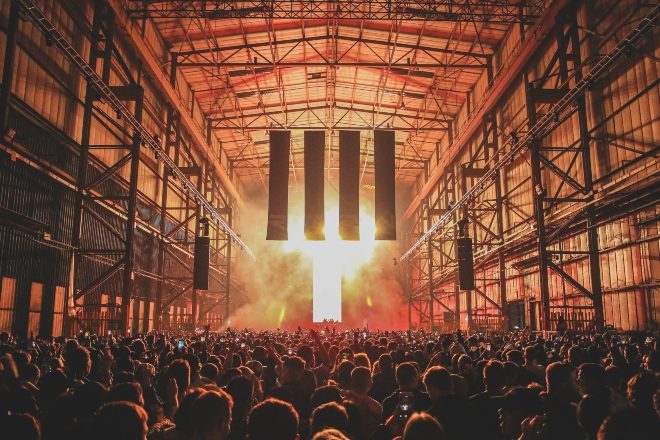 The Hydra has announced two huge shows at The Drumsheds on November 27 and December 18 this year.

Almost entirely made up of back-to-backs, two days of dance music will take over the Printworks-run Tottenham venue this winter, featuring a plethora of seminal names to the underground greats.

‘To Be’, November’s techno showcase, will see Jeff Mills taking the headline slot as the only solo performing artist, while Nina Kraviz and Paula Temple will go toe-to-toe with their high-energy sounds.

On the same line-up, Ben Klock b2b Marcel Dettmann and Modeselektor b2b Special Request will each perform in the industrial setting alongside Mala, Eris Drew, DEBONAIR, Daniel Avery, and more who will each play in a series of back-to-backs.

For December’s Drumsheds slot, The Hyrda presents a day of ‘Not To Be’. This time, Floating Points and Four Tet go head-to-head in the headline position followed by Jon Hopkins delivering a highly-anticipated solo set.

Back-to-back performances will continue through the day with the likes of Moodymann and Carl Craig, Joy Orbison and Mount Kimbie, and more.

Starting at midday, the one-off shows will continue through until 10:30 PM both nights. The AW21 mini-series is the first of its kind at The Drumsheds, with The Hydra previously hosting shows across unusual London locations.

Read this next: Jon Hopkins turned to meditation and psychedelics to overcome writer's block

After its inception in 2012, the music institution brought crowds to disused theatres, pools, churches, The London Eye, decrepit warehouses, and even a private island off the English Coast.