It’s high summer in 2017, and Movement weekend in Detroit. Eris Drew is running late for Club Toilet, a gay party that’s taking place alongside the main festival, and she’s nervous: she’s recently come out as trans and started a course of hormones, but her gender dysphoria (the gap between how she feels and how she believes she looks) is still strong. But when she gets to the DJ booth and starts to play, something changes. The club is heaving with topless men, but interacting with the scatter of girls in the front row her mixing starts to flow in a way it’s never done before. For the first time since she’s owned it, she plays Orbital’s epic ‘Impact USA (Earth Is Burning)’ during a set. It’s a track charged with personal and political symbolism. Something clicks, something falls into place, and suddenly she’s lost in a rapturous trance, connected to her body finally, filled with unbounded love.

And since – or because of – that moment of personal realisation, the world has opened up for Eris as a DJ, and she’s gone from being a relative unknown outside America (albeit a resident of Chicago’s Smart Bar, hand-picked by The Black Madonna) to playing Panorama Bar. Coming out, she says, opened her up to a love of rave’s positively charged energy, and a series of flawless online mixes has lifted the lid on a record collection that extends far beyond the traditional canon of Chicago. At the same time, her Twitter feed gives insight into a person for whom dance music’s tradition and culture extends far beyond having a good time.

Eris has found new peace, but the world continues to lag behind. It’s a sunny June afternoon when we meet at an East London coffee shop on the edge of a park. Arriving with girlfriend Jen, Eris apologises for running late, explaining that the pair were just thrown out of their Uber. It’s the kind of transphobia that’s a daily part of their life, she explains, without self-pity. British customs officers confiscating her hormones is another sign of the practical difficulties of transitioning on the road. A few weeks after we first meet she’s involved in a severe car crash on the way to the airport in Albania. “I did not think that was a safe place to get medical care,” she tell us. She got on a plane home, despite having whiplash. 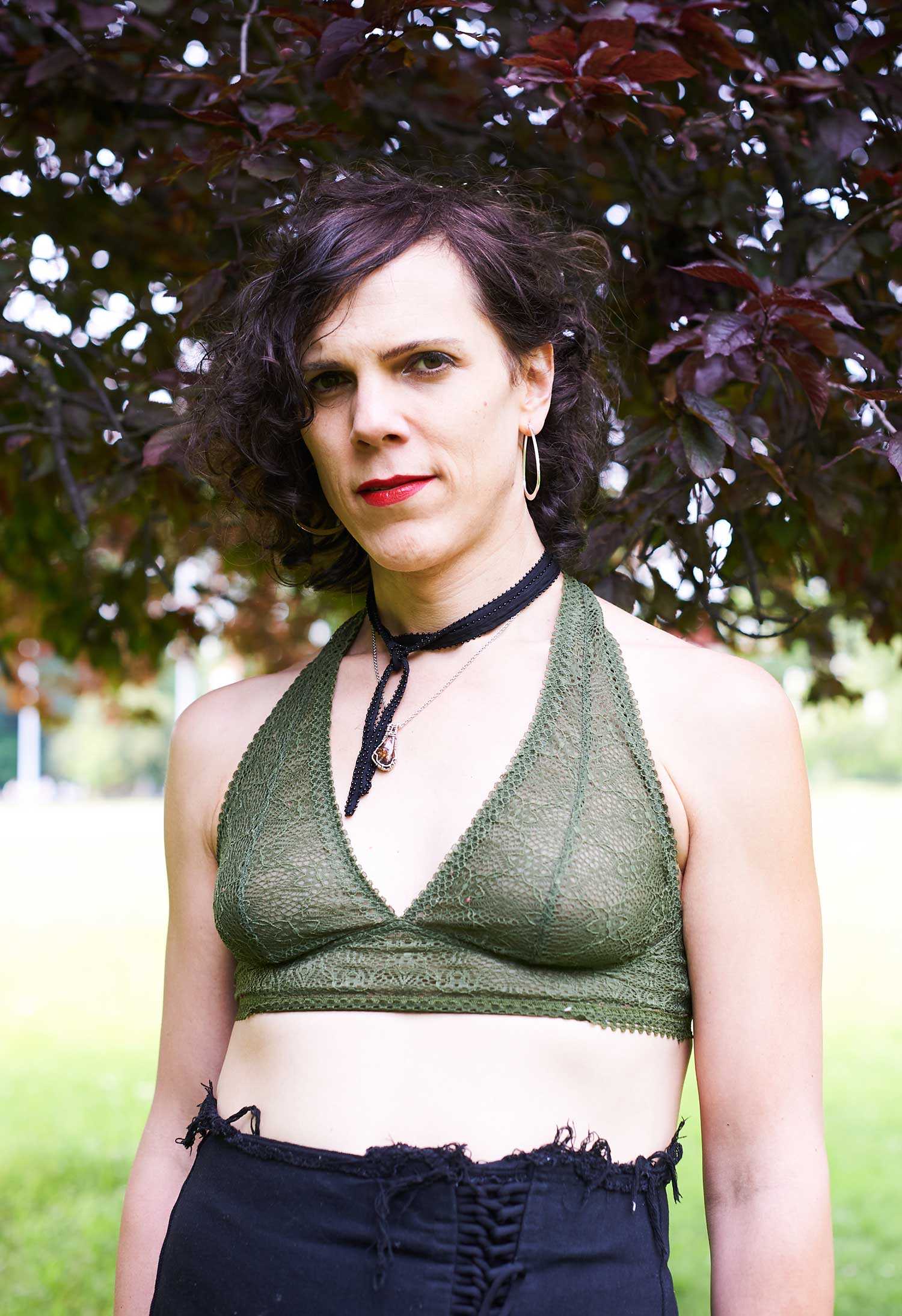 Dressed in black leather ankle boots, a black skirt and green crop top, accessorised with a ‘Black Lives Matter’ wristband, there’s a disarming directness in the way Eris talks. Her voice brims with emotion, whether it’s sadness when talking about how trans rights are inevitably tied to race, given the disproportionate violence experienced by trans women of colour, or bursting into an earthy chuckle when she talks about the sexual awakening transitioning has brought about – the opposite of what doctors had told her to expect.

A very youthful 42 years old, she was born in Perth, Australia, where her parents were teaching, moving to Glen Ellyn just outside Chicago when she was eight, following stints living in Wisconsin and Kansas City. “I loved Star Wars for the sound effects,” she recalls, and she was given her first programmable synth at around 10. A fascination with the lowest key on her grandmother’s piano perhaps foretold a love of bass-driven music.

Already listening to house, industrial and synth pop as a teen at Chicago’s Medusa’s, “a haven for weirdos”, she went to her first rave in 1992 and was hooked, becoming a particular fan of Mystic Bill. “You’d hear gabber, you’d hear trance, you’d hear jungle, then Billy would close it out with this ecstatic set that would melt your heart,” she recalls, adding that it was his diverse style that encouraged her to buy decks in 1994. Being driven home on LSD from a show that year she also had an epiphany that introduced her to what she calls the “motherbeat, a divine feminine energy” that has proved a guiding force in her life. The rave scene touched her then-closeted transness: “That exuberance, that over-the-top energy and flamboyance, the little chipmunk voices... it speaks to the experience!”

Alongside this was the Mid-West rave scene’s mixtape culture. Miles Maeda’s mixes of house, garage and early trance provided a blueprint for treating recorded mixes as something other than just a DJ set. “Each one felt like a separate art piece and had its own identity, although all of them felt like him,” she explains. A tape by US rave legend Terry Mullen, recorded in 1993 at a party called Momentum in Kentucky, helped shape her own sound and DJ style. “This is my favourite mixtape forever. And he scratches on it!” says Eris, whose own performances see her in constant motion, riding the pitch control, performing drops and scratches or using two copies of a record at the same time.

Momentum was also a party attended by The Black Madonna. Although part of the same scene, their paths wouldn’t cross until 10 years later. Eris became a regular at Smart Bar in the late 90s, at this point still closeted and married. After her marriage broke down in 2009 she put on the Fresh Meat party with Chicago mainstay Mazi. Then, following long hazy nights of smoking weed and listening to records with Justin Long, a long-standing Smart Bar resident, they started Hugo Ball in 2012, with Sevron. “It was the first party where I tried to create a vibe with installations and simple DIY,” says Eris, describing their total transformation of the club to create a “polysexual, oppositional surrealist happening”. “We blacked out all the walls with plastic, changed the flow of the room by building a DJ booth on the floor for every party. It was a huge pain in the ass; you had to carry cinder blocks down three flights of stairs.”

With a soundtrack incorporating “a lot of bleep techno, then industrial and EDM alongside acid and techno,” its unique nature didn’t go unnoticed by The Black Madonna, aka Marea Stamper, who brought Eris on board on a more permanent basis as part of their residents program. It’s fair to say she’s a fan.

“Eris is a dear friend, sister and creative confidante and it’s been magnificent watching her blossom,” she tells us. “I selected her as she is the precise example of the philosophy I had in mind at the time, which was to choose people who were going to grow exponentially as artists, embody the values of our community and become ambassadors for the club and the city. There’s no finer role model or artist in our little universe.”

The playful nature of Discordianism, an absurdist religion (or parody of religion) based on the 1963 book Principia Discordia, set the wheels of Eris’ reincarnation in motion. Wanting to replace her ‘dead name’ on Facebook, she Googled ‘ancient goddesses’. Eris Goddess of Disorder “just sounded cool,” she says. “I was also going through so much chaos, and what it said was that ‘through chaos she brings change’.”

Discovering more about Discordianism, such as the sacred nature of the number of 23, she saw synchronicities which have remodelled her outlook. Her Motherbeat experience was the same year The KLF, who were also Discordians, burnt one million pounds. It was 23 years later that she had her experience in Club Toilet. The day we meet, she and Jen had breakfast at table 23 in their hotel. “You can choose to ignore the coincidences in your life, or you choose to let them give it meaning, kind of like dreams,” she says.

Despite the increasing visibility of queer and trans people in electronic music there are many still out there living in silence, she believes, for fear of derailing their career or losing fans. “Where are the Princes of electronic music?” she asks, pointing to the lyrics of ‘I Would Die For You’: “I’m not a woman, I’m not a man, I’m something you can never understand.” 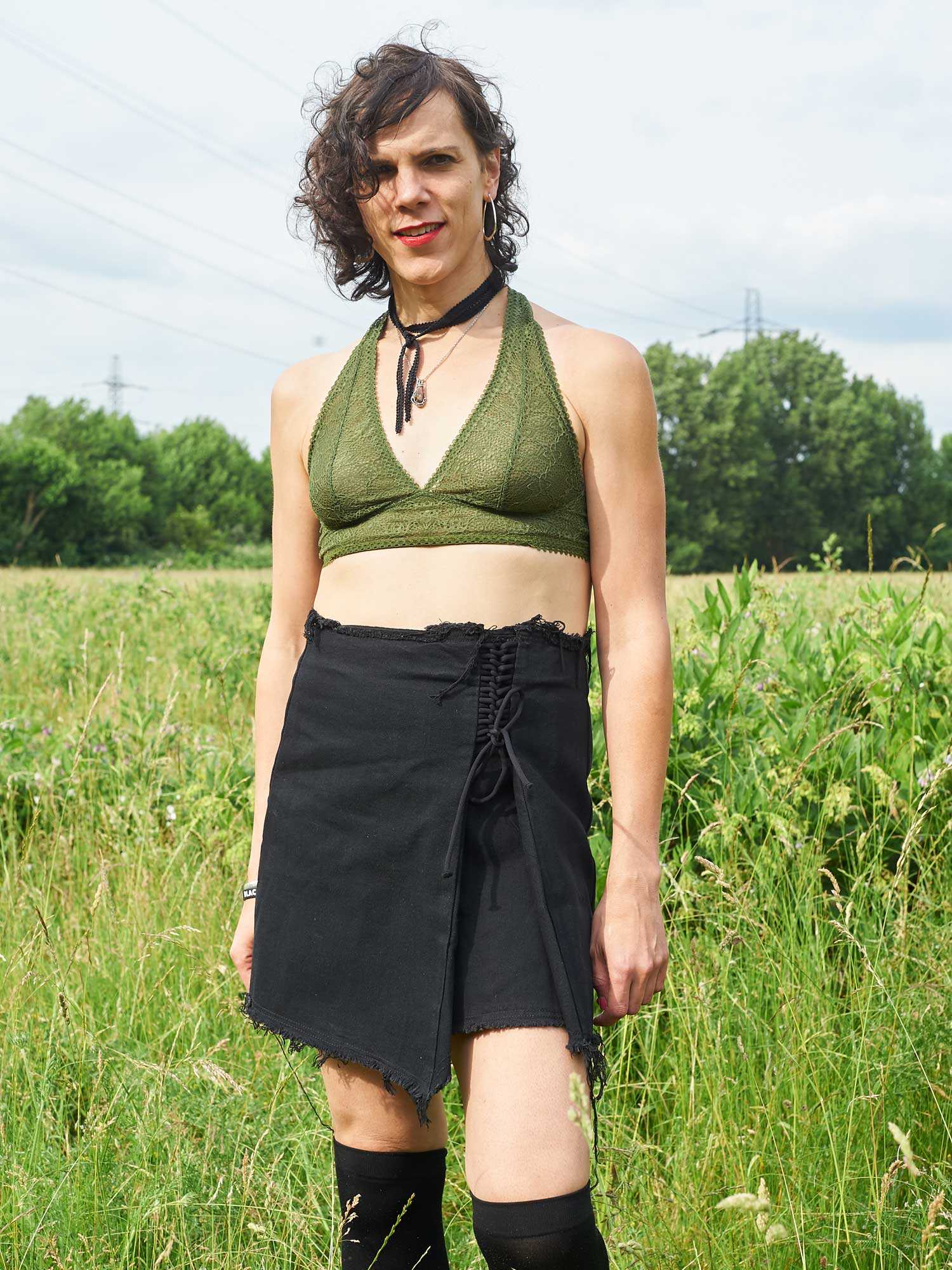 In April she held ‘The 1st Psychedelic Rite of the Motherbeat: Shamaness Imploding’ in Pittsburgh, with the second happening in August. Having studied ecstatic healing traditions, she saw that many of her favourite artists had also overcome private struggles and were be in a position to help each other publicly. “Healers almost always use rhythm, repetition and music as part of their practice, dance and kinetic forms,” she explains.

Her unofficial rider, put out over Twitter, asks promoters for water and pure weed before her sets – but the ecstatic or psychedelic state isn’t simply about taking sacred herbs. “Sex is a psychedelic experience; wearing a dress in this culture when you’re assigned the male gender at birth is a psychedelic experience. Dancing all night, no matter what you’re taking – you’re putting your body through an ordeal, you’re experiencing repetitious music, you’re changing your frame of mind.”

It’s this expectation that unites partygoers wherever she travels. Although not every venue is as attuned to what she’s transmitting as her own carefully curated parties, she believes that if there are even one or two people lost, facing the speakers, it’s worth it. “We have insane cultural apparatus at our fingertips,” she says, describing the magic – metaphorical or actual – a DJ can conjure up. “People love dancing to this music and it persists thirty years after its inception. It’s amazing to go around the world and play Chicago house records from my collection that people have never heard.”

She’s adding to this collection, with two tracks under her own name coming on Naive, the label run by Portuguese artist Violet. It’s a split 12” with romantic partner Octo Octa. “I am a very poly trans woman and Maya is one of the loves of my life,” she says. The release channels many strands of her musical history. ‘Hold Me’ (T4T Embrace mix) utilises Bob James’ ‘Nautilus’ break before beguiling organ melodies take hold. ‘Trans Love Vibration (Eris Goes to Church)’ pits the Funky Drummer against downbeat gospel organs and interwoven vocal samples. It’s the optimistic spirit of ’92 engaging with the concerns of the modern world, house’s soul and hardcore’s vitality fused by an artist deeply versed in both.

That kind of fluidity is in full effect when we catch her at the Pickle Factory a few hours after our interview, where she’s joining Jane Fitz for her residency. Gat Decor’s uplifting ‘Passion’ fades away into the Euro synths of Luca Lozano and Mr Ho’s ‘F.U.B.U.’ before Eris cuts in The Blapps Posse’s roughneck ‘Don’t Hold Back’. Seamlessly we’re onto a disco-fuelled Chicago classic, Taxi C.A.B.’s ‘Chunk-A-Nova’.

Eris seems possessed by the tracks, dancing hard and singing along to every word – something that has become a hallmark. It’s not just because she loves the songs, it’s explicitly acknowledging that a record is speaking on her behalf, even if the meaning may have been co-opted. Take Friends Of Matthew’s ‘Out There’ as an example, with its dreamy refrain of “See me, feel me, hear me, love me, touch me,” followed by a robotic voice asking “Is anybody out there?”. “When a trans woman sings that to a bunch of trans women coming out, it’s really powerful,” she explains.

Following a flurry of hardcore her last track at Panorama Bar, where she debuted in June, outside in the garden, was ‘Walking On Sunshine’ by Rockers Revenge. It was suggested by her mum to reflect the positive changes she’s seen in her daughter, and Eris cried playing it. If she believes in the healing, transcendental power of music, it’s because it’s transforming her own life, one gig at a time.