A large and laser-lit tent filled with thousands of revelers cheer in unison with an emboldened dance fervor that can't be silenced as cryo cannons blast the crowd. A feeling of inseparable energy takes hold of the space as techno royalty, Cirez D (better known to many as Eric Prydz), takes to the stage to close out the festival with the loudest bang he can muster.

The first weekend of Coachella's 2019 edition was full of surprises, upsets and remarkable performances from some of the biggest and best in the realm of dance music. Featuring a total of 167 artists spread across eight different stages on the vast polo fields where the event takes place each year, The Do LaB, Sahara, Gobi, Mohave and Yuma stages were home to electronically charged scenes that regaled Coachella's vast audience with a toothsome array of determined clubland acts.

Celebrating its 20th-anniversary, one thing that became abundantly clear at this year's edition of the festival is that rock 'n' roll no longer resides as king of Coachella. First infiltrating the event's main staging areas with iconic performances from acts like Daft Punk and Justice in the late 2000s, the rising and clashing electronic music styles showcased in Indio every year have become the main event for a huge percentage of the revelers involved.

It's a beautiful mishmash of electronic music loyalists wandering the grounds, tens of thousands of them on any given day. Young guns and veterans alike share Coachella's dancefloor spaces with energy that crowns the vibe victorious over the shoddy music pomposity that so often infiltrates the festival circuit. With such a wide array of sound on display, mutual respect and understanding became an assured state of mind for all in attendance. 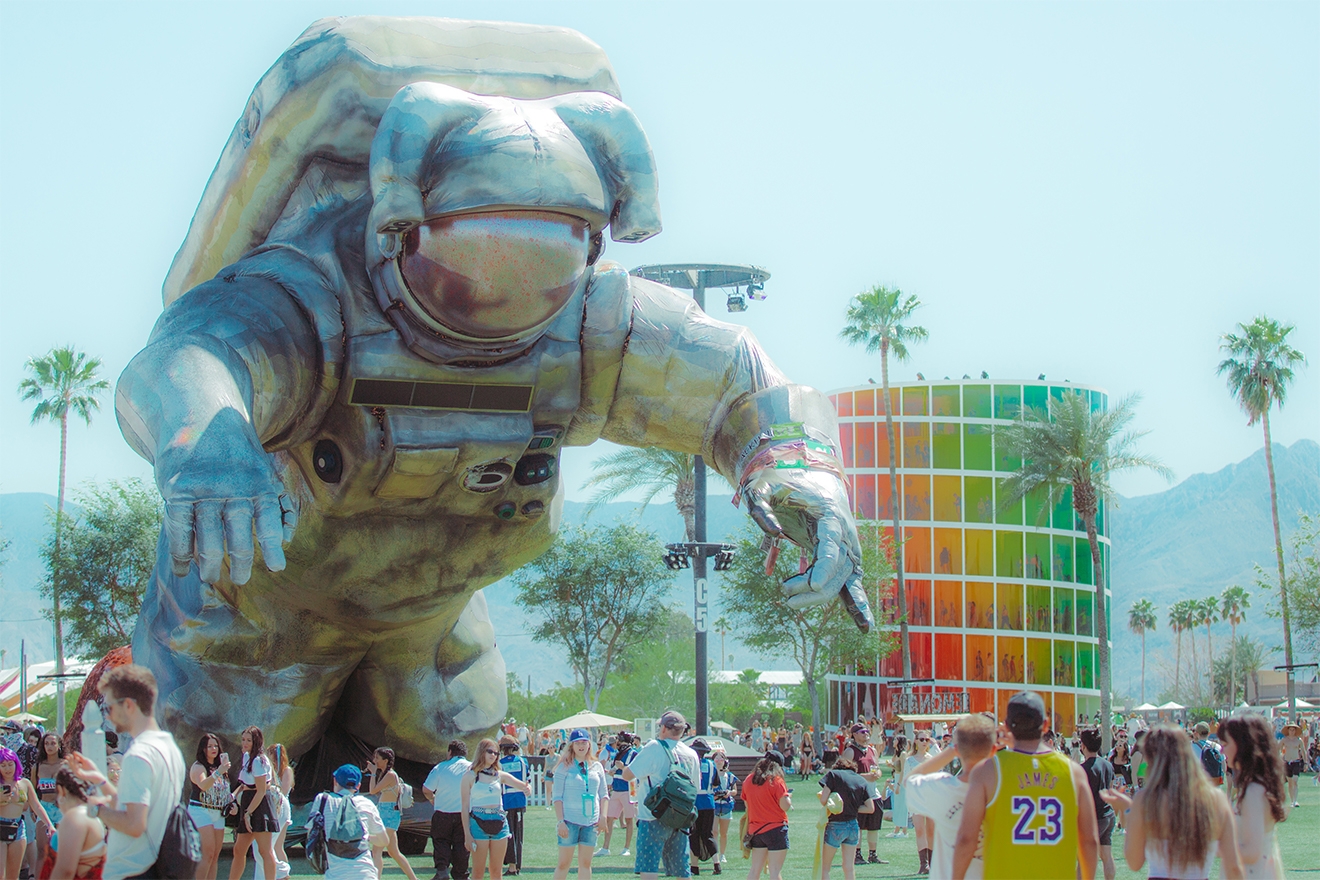 The biggest and most notable acts of the weekend took over the Mojave stage, where Four Tet, Sophie, Nina Kraviz and Aphex Twin played headlining sets. Pushing and warping her punishing production towards triumphant builds that blow your hair back, Sophie's delivered a searing hot and challenging performance on Friday night with standout renditions of tracks like 'Ponyboy' and 'Faceshopping'.

Elsewhere, Nina Kraviz was set to debut her highly anticipated new live A/V show. Many wandered in, in hopes of being treated to relentless techno from the Russian favorite, but were surprised and confused by the unique artistic performance that Kraviz prepared instead. She moved around the stage drinking cups of tea while reciting poetry from her journal and continued to dance, sing, and clean a stage prop mirror. While daring, her performance seemed to catch her fans off guard as the music dipped and swerved between moments of acapella singing and heavy-handed techno progressions. 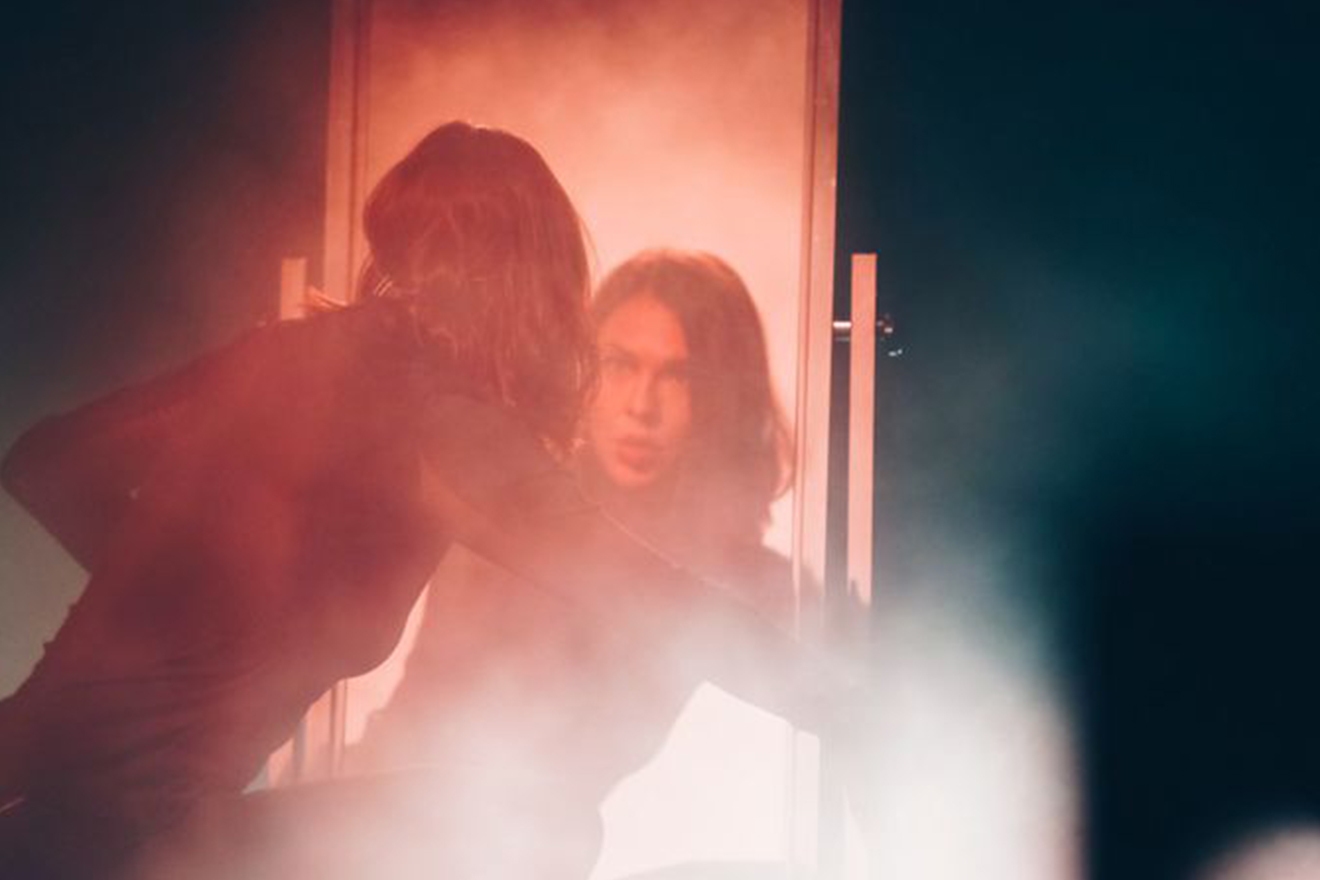 Nina Kraviz is not the first have tested out their live A/V shows on Coachella's Mojave stage. Other principle DJs such as Dubfire and Richie Hawtin both moved from the Yuma Tent to Mojave to debut their live shows in 2016 and 2017 respectively. Both of their performances were bold and hailed as major successes, giving Hawtin the momentum to tour his CLOSE A/V show around the world for years. Perhaps it was Kraviz's hope that she could pull off a similar response, but with too much pomp, not enough play and the initial reception to her new performance concept, it seems highly unlikely.

With no lights and no visuals, Four Tet liberated the minds and warmed the bones of all in attendance with a killer one-hour set that featured huge tracks like his most recent popular 'Only Human' and his passionate remix of Bicep's 'Opal'. It was the perfect build-up for the main event of the evening, if not the festival itself.

Aphex Twin's mind-altering Coachella set was a landmark musical performance that will never leave the minds of those who were lucky enough to pay witness. His first performance at the festival in over 10 years, the luminescent and epileptic display of visuals by Weirdcore dominated everyone's vision as the music pioneer threw out an irregularly powerful battery of Berlin techno, acid house, industrial noise, and jungle that would collide and melt away with a jarring fluidity. You can watch the full performance by going here. 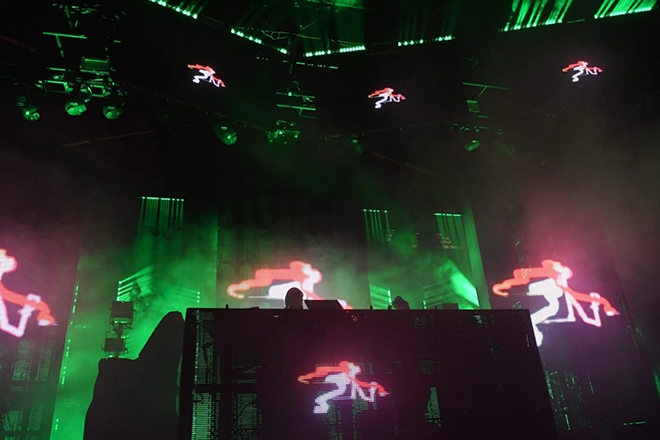 Retreating to the darkness of the Yuma Tent - Coachella's underground dance music haven - a massive line-up of techno and house all-stars resided on the bill. As more and more people gravitate towards dance music’s vast spectrum, the Yuma Tent gets kitted out with upgrades year after year with mesmerizing lights, alien-like lazer renderings and a footprint that continues to expand on the festival grounds. Performances from big-league techno stars like Amelie Lens, Charlotte De Witte, Cirez D and Stephan Bodzin were met with huge crowds of dance fanatics who embodied the heavy 4x4 assault with every step. On the house front, the reunited iconic '90s dance music duo Deep Dish - made up of Dubfire and Sharam - played for a mixed crowd of nostalgic and a genuinely curious (but never reluctant) crowd. Kölsch and Tale of Us made waves with their emotional dancefloor sounds - testing out new demos and unreleased edits on their receptive and loyal audiences. 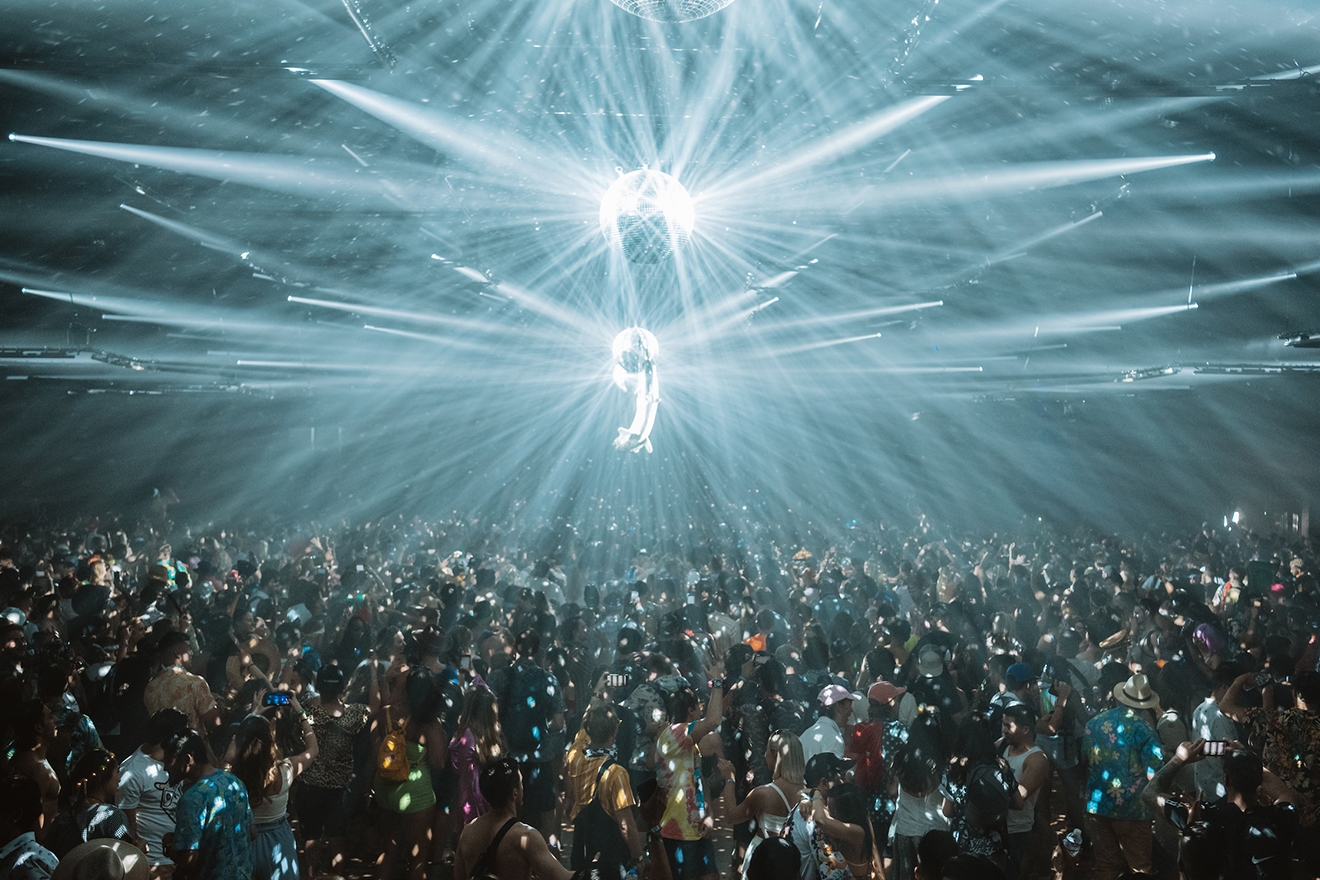 Huge servings of bass house and trapped out beats from acts like Anna Lunoe, Jauz, Fisher, Diplo, Ookay and more resided over the Sahara tent, appealing to the younger, adrenaline obsessed crowd that wanted to "get turnt' and throw their weight around. Tracks like Lunoe's Mad Decent hit 'Badass', Redlight's 'Sports Mode' and Fisher's big as life banger 'Losing It' were all major hits that made the ground shake.

The Do LaB booked a mixed solution of artists and secret guests that soundtracked the stage's sun-soaked vibes with laid-back excellence. A perfect respite from large stage insanity, Do LaB is always a great place to groove, bounce and bang it out - this year with acts like DJ Seinfeld, Mr. Carmack, Pete Tong, Little People, Bleep Bloop and more. Some of the special guests - an ongoing feature of the stage that brings a fun hook to the end of each night of the weekend - included Major Lazer, Bob Moses, Guy Gerber, Agoria and more. 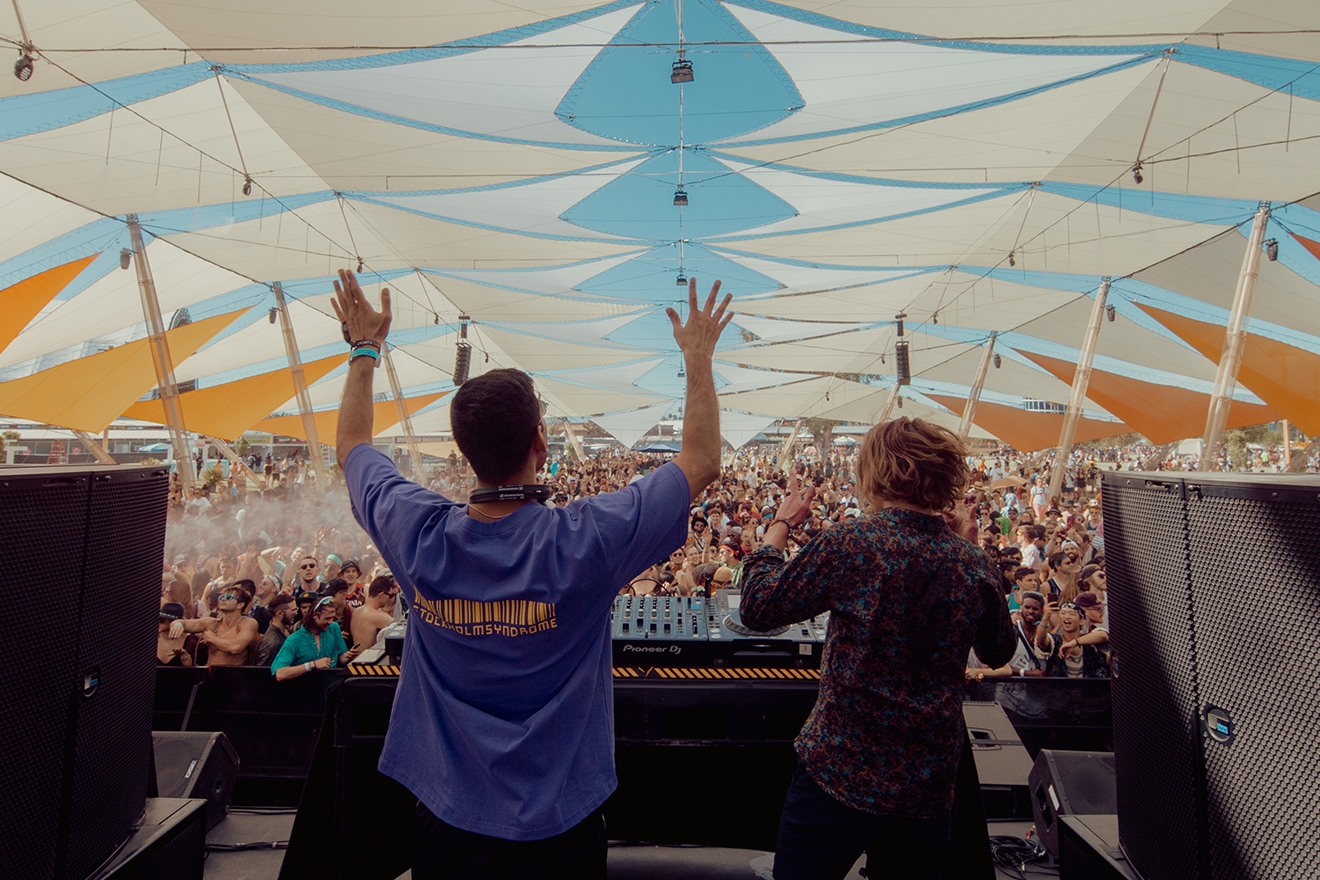 At the festival's Outdoor Theatre, acts like RÜFÜS DU SOL and Bob Moses showed off the newfangled and increasingly popular crossover between live instrumentation and electronic music that has been subjecting new ears to the wonders of the dance music world. Gesaffelstein made his much-anticipated and metallic return to the festival on Sunday with a gritty sound and showmanship that left the audience in a frenzy.

Kitted out in an outfit made of Vantablack VBx2 - the darkest substance known to man - Gesaffelstein became the first artist to use the material on stage. Vantablack paint is a coating so black, it makes 3D objects appear two-dimensional and only reflects 0.036% of the light that strikes it. The shadowy and dark producer has played a major role in bringing hip hop enthusiasts and headbangers alike into the dance music fold with his edgy and radical production, and this performance was no exception.

The path that extends forward for Coachella's incredibly rich musical story has been paved by the greatest producers, singers, musicians and DJs to have graced any stage. Now 20 years old, it is clear that the expert music curation of this event extends beyond the ageism that undermines so many festivals of this scale. Coachella's dance music track record and the scene's genuine appreciation for its history shows that the kids who are experiencing the festival for time will still be looking forward to attending decades down the line. We're in it for the long haul.

We put together a Spotify playlist of our 50 favorite tracks from the weekend. Check it out below!