It’s a dark, unremarkable evening in the German industrial city of Dresden, and the atmosphere, just two weeks after the city’s clubbers enjoyed a serotonin-draining New Year’s marathon, is largely defined by an unrelenting drizzle. Fortunately, Bjarki Sigurdarson, the genre-defying techno experimentalist headlining tonight in a large warehouse on the outskirts of the city, loves nothing more than to talk about the weather.

“It’s the only thing that we all naturally have in common”, he observes, following a few hours’ train journey from Berlin, during which the topics of conversation were otherwise somewhat more specific: Arthur Russell, social media (or lack thereof) and the obscure traditions of his native Iceland, including Bollu dagur, or ‘Doughnut day’, the details of which he and his home town crew relay with much amusement.

“Weather is the attitude of the earth,” he ponders between bites of a Krispy Kreme. “And it’s probably one of the few things that is completely out of our control. The biggest mistake that we have made is to believe that earth was made for us. And that’s also one of the reasons why we have disrespected the planet and our living conditions. This development [the degradation of the environment] is terrible. It reminds us of horror movies, of end-of-the-world phenomena.” 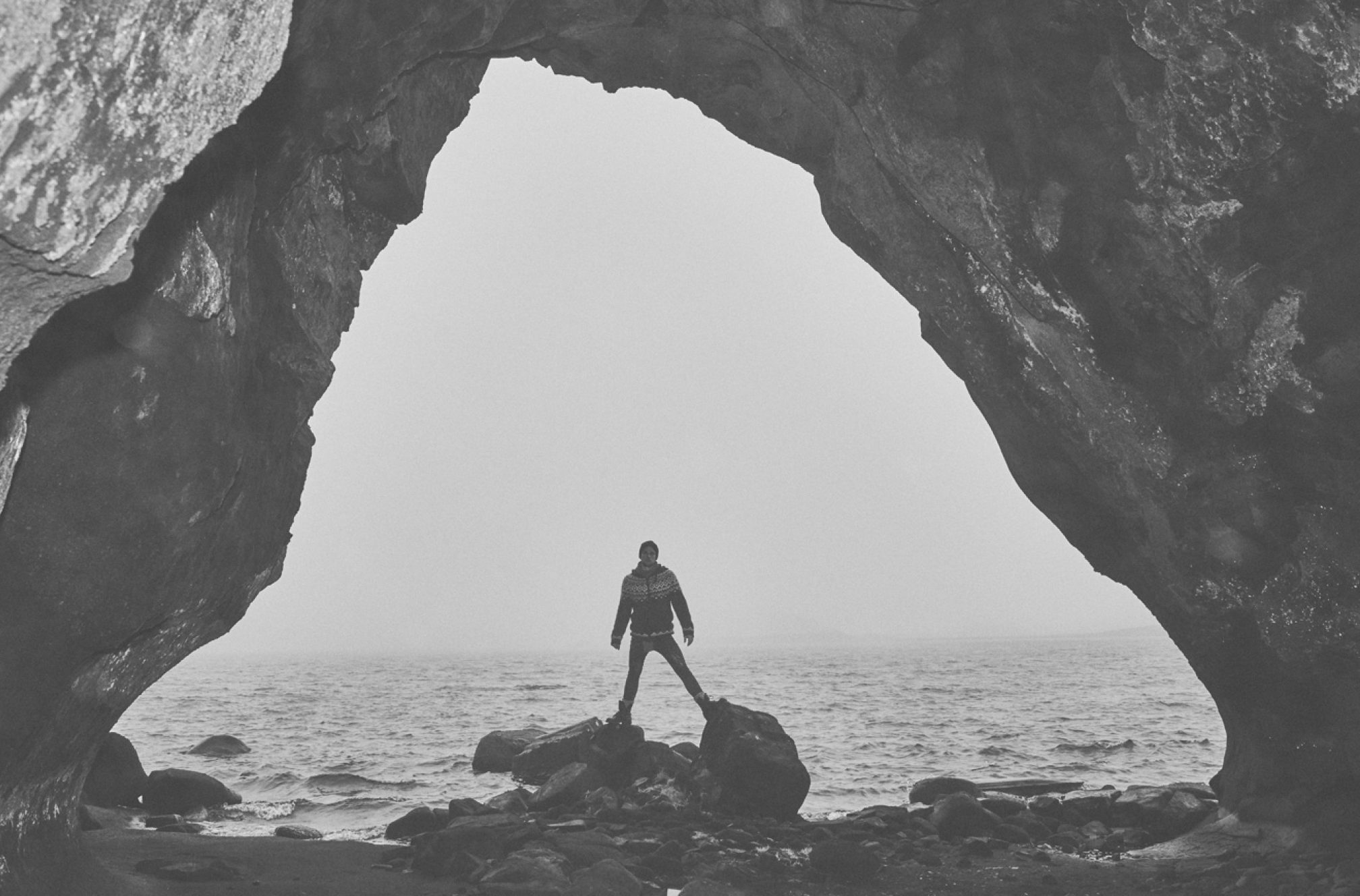 Bjarki’s latest contribution to our own delicate ecosystem of dance music is therefore ‘Happy Earthday’, his first full-length LP for !K7. It follows on from his work on Nina Kraviz’s ‘Trip’ label, where, since 2015, he’s released a onslaught of EPs and albums that have consistently defied expectations of genre, tempo and occasionally, good taste. With festival-headlining acts currently sending BPMs soaring with harder, faster and weirder club rhythms, Bjarki’s music, which emerged volcanically and unexpectedly as the calling-card for Kraviz’s vision with Trip, is now making more and more sense.

Bjarki emerged in his mid-twenties from the Icelandic techno scene; or rather, emerged as the Icelandic techno scene. With a national population of just under 350,000, a third of which resides in the capital city of Rekjavik, there’s hardly the market for a mega-club. Exos, previously Iceland’s biggest techno export and another regular on Trip, was a natural mentor for the restless young producer, as well as a forward-thinking rave promoter, punctuating the nightlife environment by arranging performances from the likes of Surgeon and Adam Beyer.

“I never dreamed about being in clubs”, admits Bjarki. “And then, when I moved to Amsterdam at eighteen to study audio engineering, I was just blown away, like, ‘Woah, this is actually real!’ I was working with promoters who became my friends while throwing illegal parties, and it was super-interesting. And I fell in love with these guys in dirty pants, always holding a speaker, always working.”

You can trace an old-skool, DIY mentality in Bjarki’s approach ever since. After his success under the guidance of Kraviz, he was quick to establish bbbbbb, the idiosyncratic label that serves as a home for yet more music under his own name, as well as for his cucumb45 alias and friends such as Lord Pusswhip, EOD and Kuldaboli. As underground techno shifts out of its deadly serious, all-black stage and into something more spiritually minded, the style of bbbbbb is profoundly, refreshingly silly. Its visuals recall 90s experimental labels like Rephlex, Flying Lotus’ cosmic nonsense and of course, Aphex Twin, with whom Bjarki has shared an EP on Trip. In a DIY animated music video commissioned by Adult Swim for his own ‘Bacteria Ben’, shapeshifting monsters embark on a psychedelic rampage through a garish cityscape, altering every possible dimension by stealing and eating the eyes of citizens, beginning with an amateur Batman. At one point, the GrimReaper himself succumbs to death, suddenly sprouting angelic wings made of corn. Watching all three minutes while dealing with a Sunday hangover inspires confusion, then mild anxiety, then laughter. A friend of Bjarki’s tasked with managing this project shows us a series of concerned archive emails from Adult Swim management: “Can we request that the demon’s penis is either obscured or removed?”

“‘Comedy is the highest art form’, as Arthur Russell once said,” says Bjarki, citing the wisdom of the New York outsider musician whose approach continues to inspire him. “And bbbbbb is not only mine. We’re a group of people, so it’s more a reflection of our friendship group, our humour, and our tastes. We are all on the same frequency. We even like the same food.” 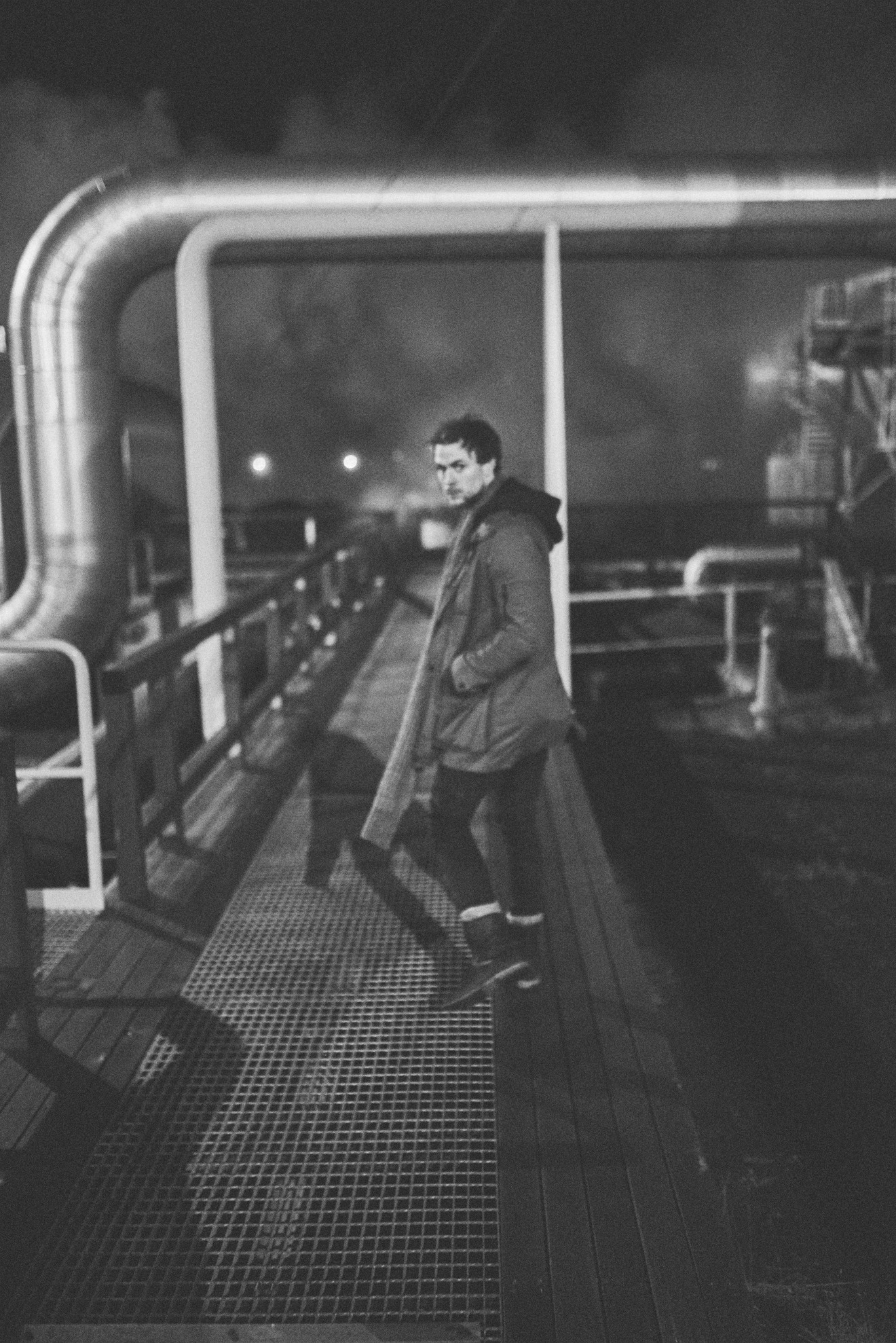 Compared to the sheer ruthless energy of Bjarki’s back catalogue, ‘Happy Earthday’ gets under the skin in a different way. An extended sonic love-letter to the world around us – or at least the parts of it that desperately need preserving – it dials down the madness considerably. There are no angry demons or psychedelic, soaring whales, just battering winds, rugged mountains and roaming livestock, many sourced from field recordings in the Iclandic outdoors; on early highlight ‘beiv_sheep’, Bjarki samples and gently distorts the contented baa-ing of sheep, and on (.)_(.), he loops whistling birds into a skydiving braindance. Even big-room moments, such as ‘Cereal Rudestorm’, are imbued with a sense of awe.

“I’m not going to make anything like this again,” he says. “Some of the tracks on the album were made ten years ago. There are tracks here that I’d promised to myself that I was never going to release.”

He’s keen to stress, above all else, his need – even his responsibility – to create; it’s vital to his world view, to his mental health, and in the creation of bbbbbb, more than any idea of celebrity or success. Post-soundcheck, and in the hours before his gig, he resists the opportunity to chat shit and drink beer with his oldest friends, disappearing instead to further perfect his productions, fully immersed and earphones in, before being bundled into the promoter’s car at the last minute.

Bjarki’s performances, typically accompanied by visuals from the bbbbbb universe, sit somewhere between a ‘live’ gig and a DJ set, allowing him to remain immersed in the reams of his own music without the expectation of instant crowd-pleasing that are at odds with his style. He says he chooses his gigs carefully, thus avoiding boredom and endless DJ dinners. It’s a necessary approach from somebody increasingly concerned about our collapsing environment. 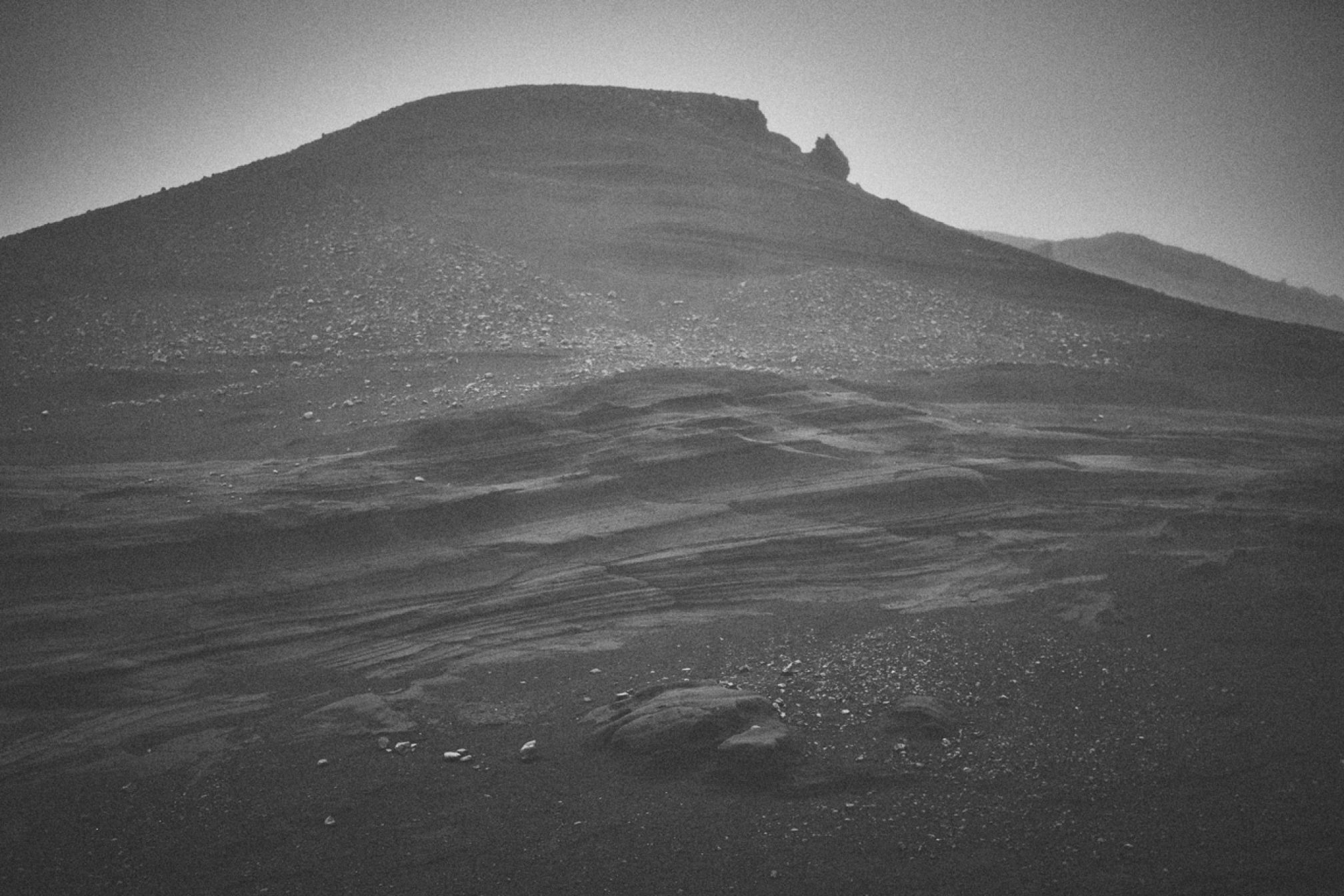 He travels to Dresden still recovering from a days-long New Year’s session – not spent melting into someone’s living room floor, but locked in a friend’s studio in Amsterdam. During these creatively fertile bursts, Bjarki confesses to sometimes forgetting to eat as well as getting into what he calls a “bad, unhealthy routine” in which he says it does him no good to be surrounded by “normal people”, such is the extreme state of his emotions.

Out of the studio and in the company of his crew, zipping across the flat landscape of Northern Germany (a little dialled-down from the prehistoric vistas that inspired ‘Happy Earthday’), he’s on thoughtful form, pondering the possibilities of that next chapter. He reveals how the practice of painting has begun to seep into his creative process.

It’s been less than five years since ‘I Wanna Go Bang’ came out, Bjarki’s first release and a track that was about as big as an ‘underground’ release could possibly get. Championed by Kraviz and rinsed up into the upper echelons of EDM, it introduced the hypnotic pleasure of big-room techno to a new audience, while serving to highlight the scene’s mindlessness to others. In an alternate universe (or, our own), the instant success of ‘I Wanna Go Bang’ could have cracked the code to an Ibiza residency rich in white noise and endless, enormous drops. But for Bjarki himself, primed with three whole albums to drop in its wake, that behemoth didn’t really mean much either way.

“I made that track when I was nineteen, and I’m twenty-nine now”, he shrugs. “I had ten or fifteen tracks that sounded exactly like ‘'I Wanna Go Bang’. Even stronger! Faster! You know? And maybe without the vocal.” 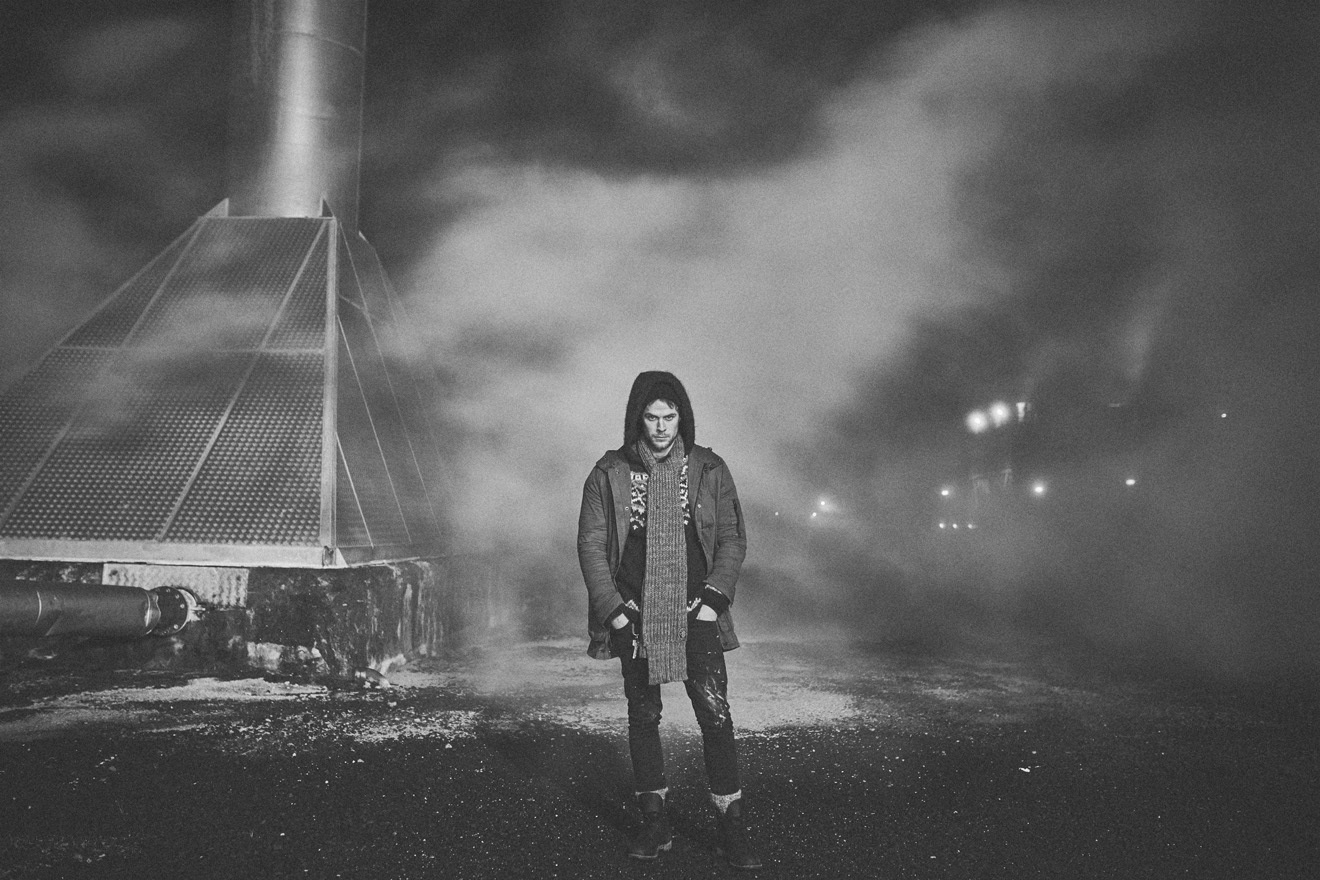 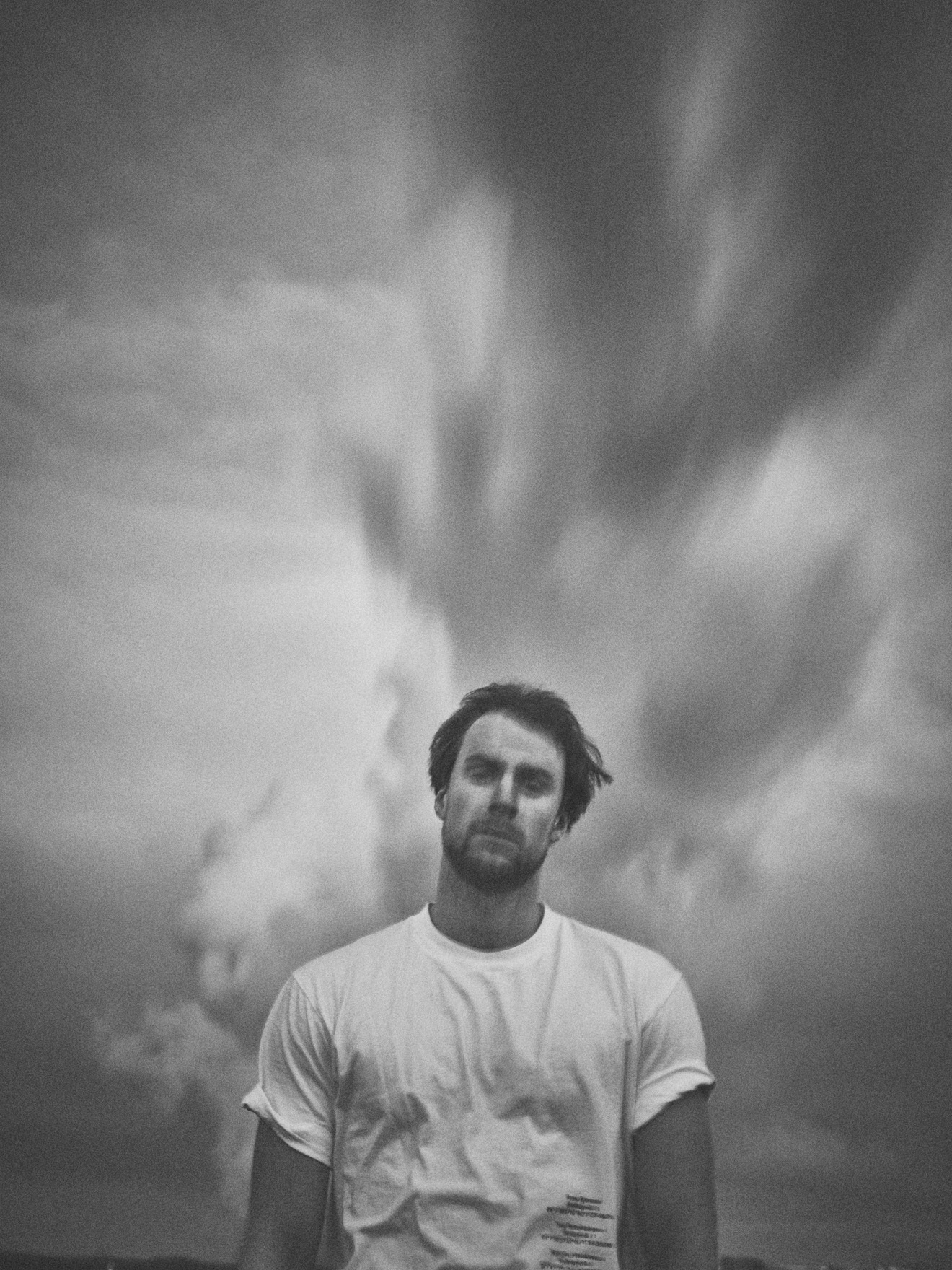 Talking to Bjarki about his career choices is tough; in his own words, once he thinks about his music, “it’s over”. He’s smart, and he knows what he wants, but he still considers himself a bit of an outsider on the regular techno circuit. “People get so stuck [on] image control. And I think that’s kind of taking away the whole reason why you started doing this in the first place. So it’s more about them than the actual music. You’re channelling a completely different frequency. It’s more narcissistic, and it’s super-competitive. I don’t feel that, and I want to stay away from it.”

He also continues to stay far removed from social media. It’s a personal choice that initially created an appealing sense of mystery in our selfie-saturated age, but sadly, it didn’t work out. In 2017, Bjarki was forced to break his silence when bbbbbb’s co-founder, Johnny Chrome Silver posted a transphobic Instagram comment in regards to US producer, Octo Octa. Bjarki immediately parted ways with Chrome Silver, cancelled an upcoming US tour and vowed that bbbbbb would “continue to support artists with no discrimination, and will NOT CONDONE the actions of those who do not exude compassion, empathy, and understanding for all.”

“I am born and raised in Iceland”, stresses Bjarki, drawing attention to the country’s strong human rights record, its openly gay leaders and its progressive attitude to same-sex couples. “My views reflect, in many ways, the open culture and freedom that exist there. I am very proud of being who I am.”

He declines the opportunity to expand on his own personal life and identity, but claims strong links to the small Icelandic LGBT community and assures me had plenty of “pissed off” friends to answer to. “When I started releasing music I wanted to be anonymous; I’ve never felt the need to express myself publicly in any other way than in music”, he explains. “[But] I was put in a position [where] I had to apologise for something that is far from my beliefs. Nevertheless, I had to take that responsibility. It is obvious that I am not anonymous any longer. A lot of people listen to what I say, and that is good.”

Bjarki is wary that the internet “might not be the best way to deliver a message or emotion, as it may look like you are glorifying yourself”, but the experience has also led him to reflect on how his position might allow him to support the environmental causes that are preoccupying his mind and his music.

So if anonymity is overrated, what’s the plan as one of techno’s most unpredictable artists matures, evolves and becomes more well known? “The plan is to create,” affirms Bjarki. “I think it’s wrong to do things to get something in return. I’ve never thought like that with music. Music has been something that’s helped me just to get through life and my thoughts.”

‘Happy Earthday’ is out now on !K7

Music vibrates in you: Getting lost in Bjarki's unpredictable techno
Take this трип: On tour with Nina Kraviz, Bjarki and the Trip crew
Nina Kraviz's трип to Barcelona party was a beautifully twisted family affair