The San Diego Air & Space Museum is a cathedral, built to worship the religion of exploration and human ambition. From its yawning chapel hang a rogue’s gallery of aircraft, from the fortress-like Consolidated PBY Catalina flying boat to the space-dusted Apollo IX Command Module: all suspended in mid-flight, frozen in time as if caught in amber. There’s even a Mig-17, a Mach-one reminder that America was not alone in revolutionising the science of flight.

Underneath this Russian warbird stands Nina Kraviz, head bobbing rhythmically. Well, she’s not standing, really, more like swaying in the preliminary stages of a dance, lips pursed thoughtfully. On her navy blue T-shirt a silkscreened image of Yuri Gagarin, the first human being in space, looks out at the crowd. In large font along the back of her shirt, ‘CCCP’ is printed boldly. “I thought maybe it would cause a little bit of dissonance,” she tells us later. “I probably shouldn’t wear this T-shirt because the museum is a US kind of thing, and I’m coming with a Soviet Union thing, but I’m sorry, it’s so conceptually cool!”

The room is cavernous, the air a bit chilly in the late autumn evening. Smiling, she fades Bjarki’s ‘As You Remember’ into the mix, the fuzzy techno emanating from the Funktion-One speakers warming up the room. The samples crackling under the breakbeats – recordings of old NASA flight communications – sound as though they were born in this hall. Kraviz sinks into the moment. 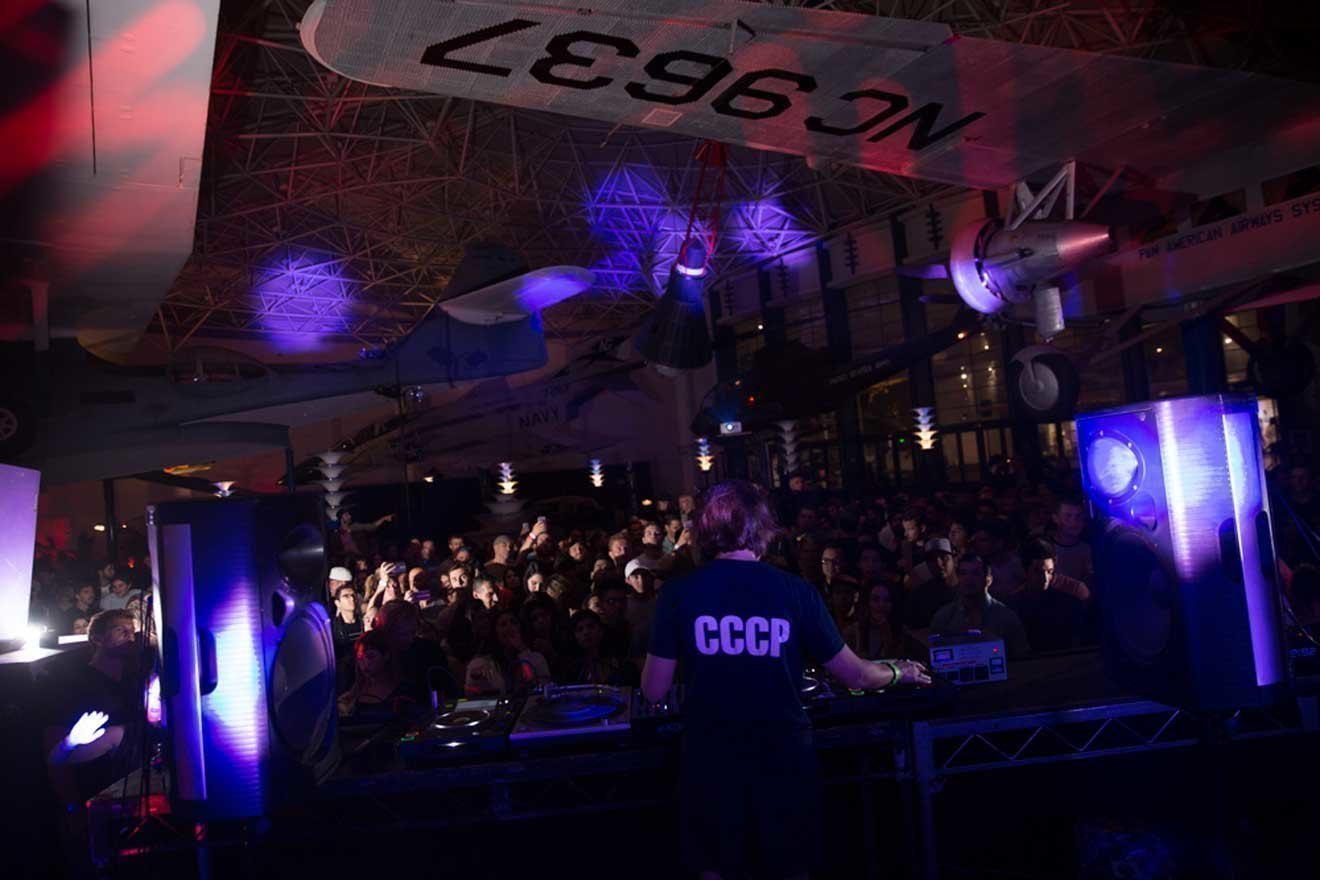 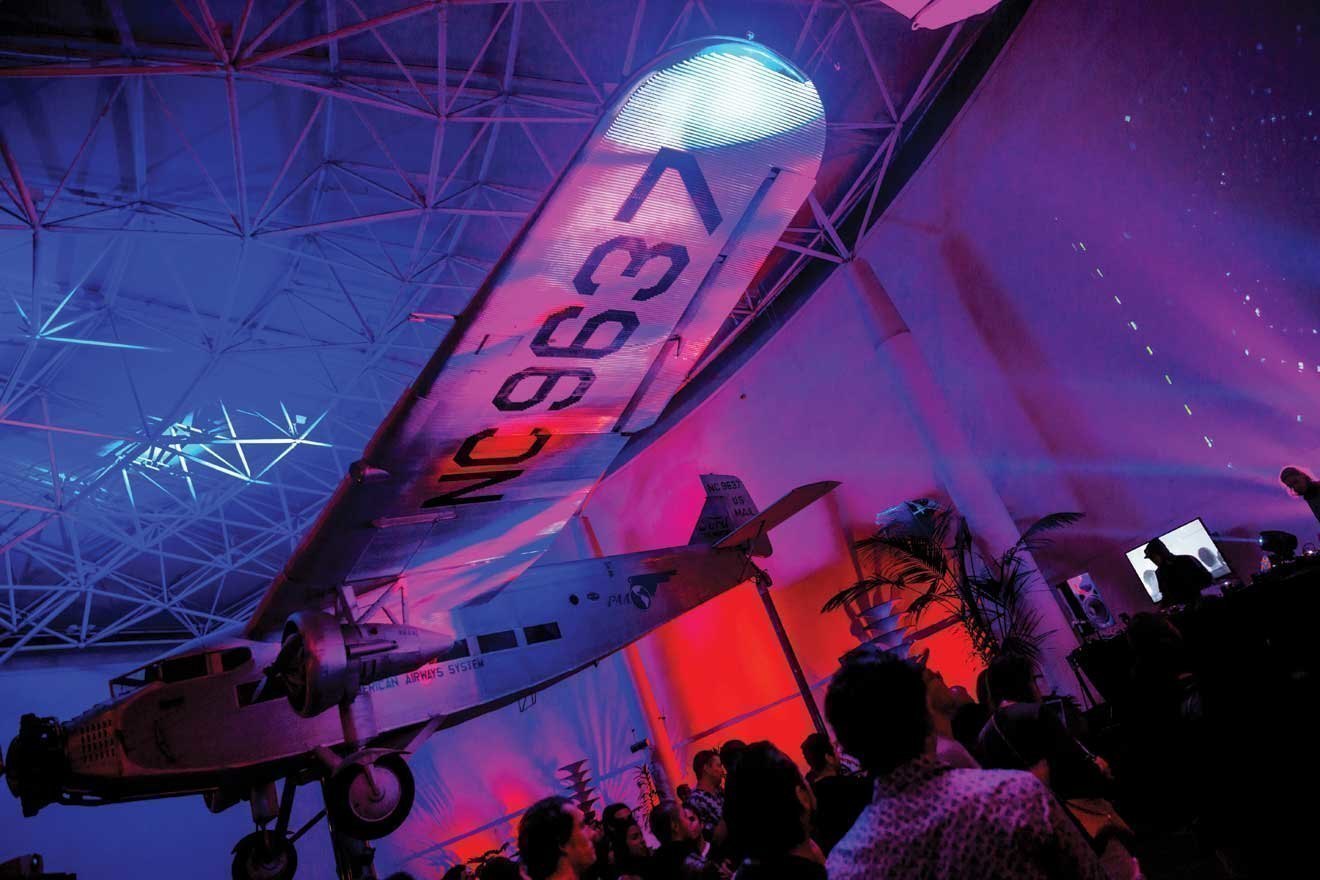 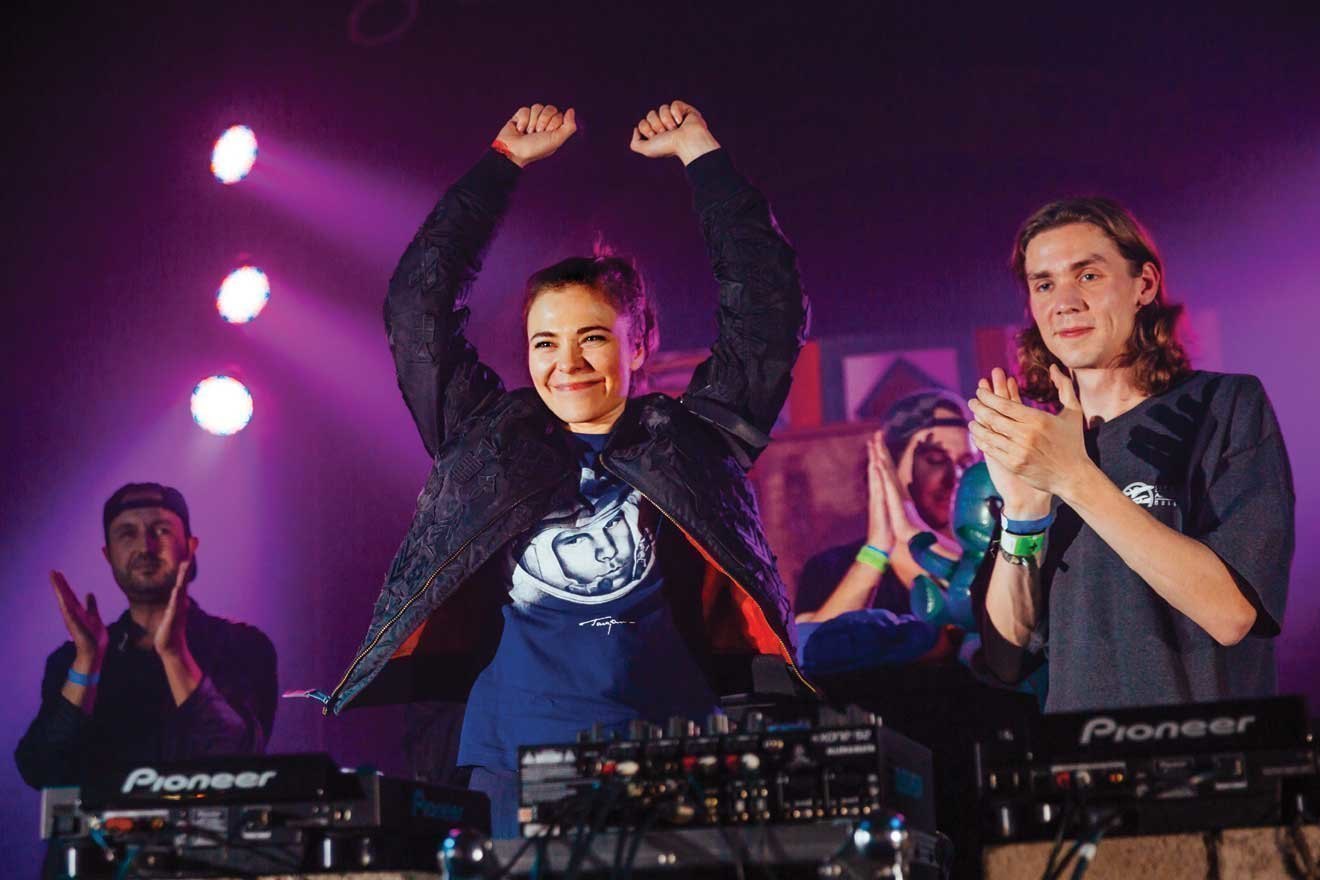 If you’ve ever watched Nina Kraviz perform – either live or on the slew of mixes you can find online – what you’ll notice is her tendency to get really into her own head, to another world, connecting with the audience via physical movement. It’s like she can’t help it, transported through her headphones to one of the sweaty raves in Irkutsk that helped form her sensibilities.

And now, here in the Air & Space Museum as Bjarki’s beat scrambles the brains of those assembled, is one of those moments. You can see her scanning the room, but not just the hundreds of people dancing before her. Her eyes linger most on the giant aircraft hanging overhead.

“I really love space; I love everything that has to do with aviation,” Kraviz says after her set is done, cooling off in the post-set delirium. “Every set I play is really different, and in this one I was trying to find music that would fit in the surroundings – more cosmic, space-related. Some acidic stuff that would dissolve into the room.” When Kraviz gets animated about a subject she doesn’t so much talk as wrap phrases in melody, as though she’s narrating a film. And when she talks about space or planes or flying, it’s almost like she’s singing in a well-articulated Russian accent. Her intense love of aviation, she tells us, bleeds into other areas of her life, and is one of the reasons why she can stomach the intense DJ schedule. “Still after traveling almost every day, on the edge of exhaustion, any time I’m going on a plane I feel extremely excited. Like a child,” she says.

It’s a good thing she enjoys travel, because Kraviz doesn’t have the luxury of spending many nights resting in her own bed. It’s been an incredible year for her label трип (Trip), releasing five double concept albums, and – from Bjarki alone – three triple LPs. Besides that, Nina has had arguably her most successful year as a DJ ever and mixed the latest fabric compilation. Most of all, she’s taken the dreamy techno aesthetic of the label into the physical realm. Tonight is the last North American show on the first official Trip tour. The collective of label-mates and conspirators Nikita Zabelin, Bjarki and (at times) Detroit techno legend K-Hand, have stormed through Miami, New York, Montreal, Toronto, Mexico City, San Luis Potosí and Los Angeles, making San Diego this leg’s finale.

In a couple of days she’ll hop on a plane and head to New Zealand, Australia and Japan. We’re now standing outside of the museum, on a deck next to a converted backstage area. Besides the ice bucket of chilled Champagne and Stone IPA, there’s no hint the classroom is playing host to one of the world’s most uncanny techno crews. One of the fundamental tenets of the Trip tour was to employ unique locations, ones that reflected an indelible aspect of the host city. There was a shuttered prison in Montreal, an old textile warehouse in New York, and a colonial fortress in San Luis Potosí. The night before this show the Trip team massed in a forgotten movie studio just outside Hollywood.

Which brings us to the Air & Space Museum, located on a plateau called Balboa Park overlooking the San Diego airport. Nina specifically requested the museum for its aeronautic focus, and the promoters moved heaven and earth to secure it for her. The fact that it serendipitously sits right below the airport’s flight line – guaranteeing a jet screeching overhead every 180 seconds or so – fills Kraviz with glee. 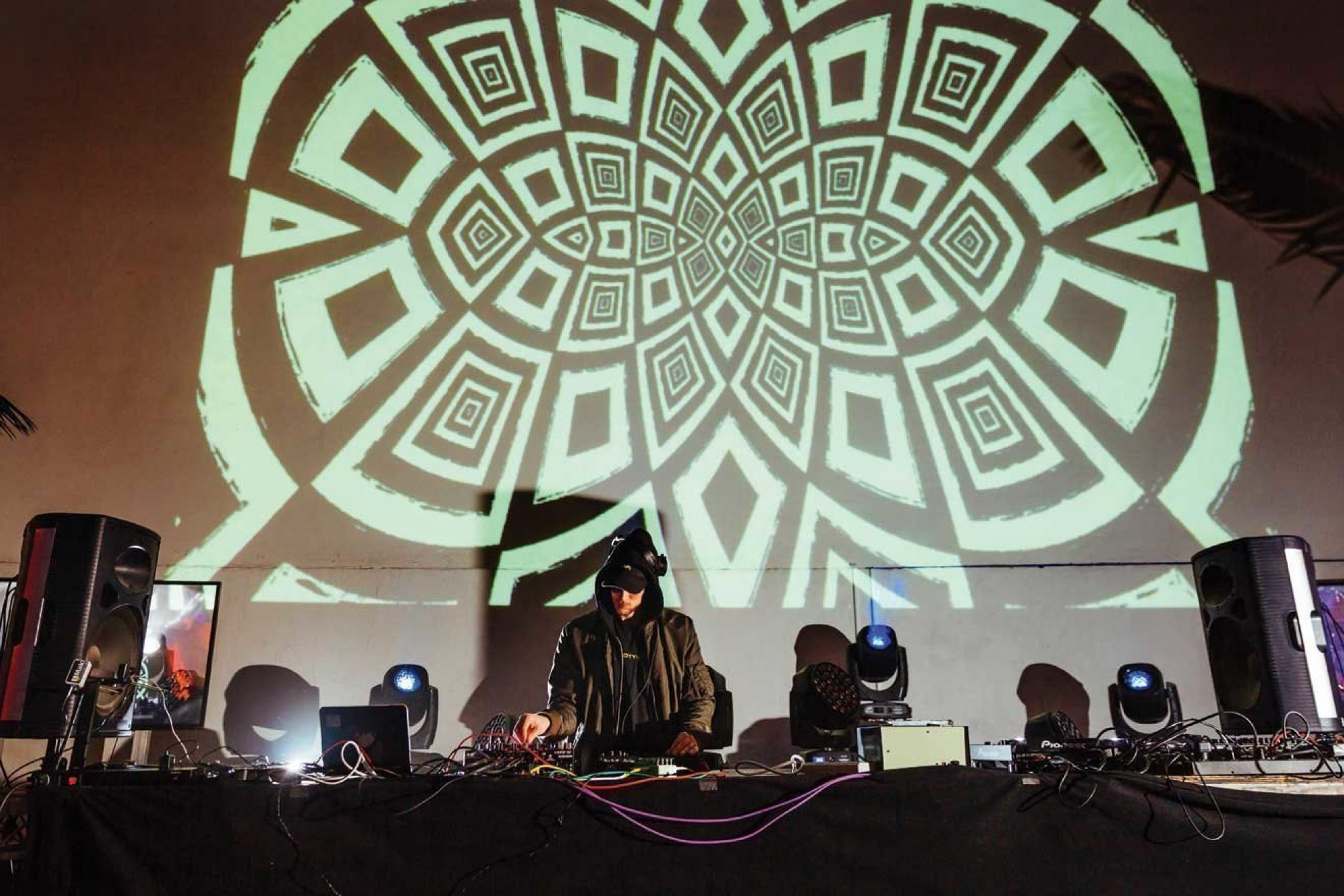 “This [location] is my favourite so far. How beautiful it is – we’re talking right now, and we see planes arriving,” she says, as a massive Airbus A380 flies overhead, piercing the darkness with high-wattage landing lights and screaming jet engines. “For me it’s still pretty much of an insane fact that this huge bunch of metal can fly high. So quickly, so elegant, so effortless, and get us somewhere. I think people get used to [these] free magical things really quick. And then they’re like, yeah it’s OK, it’s normal.”

Twenty-four hours earlier we were in a hangar-like brick building in Elysian Park, Los Angeles, that used to function as a movie sound stage. The entire room is bathed in deep red light, and opener Nikita Zabelin’s bass is so thick it makes it feel like we’re all swimming in blood. Then the sound turns off, and a black hooded DJ, baseball cap pulled low to cover chiselled features, slips behind the decks.

This is Bjarki, the Icelandic producer behind the smash ‘I Wanna Bang’, arguably the techno anthem of 2015. Behind him on a projection screen, Janet Leigh showers in black and white. When the shower curtain is ripped open, the famous Psycho keys start playing in rhythm, and the stabbing motions move in synchronicity with Bjarki’s rolling techno beat. It is a classic Bjarki intro, brash and irreverent, done in classic Trip fashion, and incorporating the city into the milieu.

“What I like about DJing is that you can create a party without taking it too seriously,” he tells us later. “Some people do it a little more pretentiously, so what they’re mixing is not reflective of themselves but what they want to project. But when Nina plays it’s more about her energy, her attitude. It’s more honest; you can feel it. She knows how to entertain people. She knows how to build up a party, without pretention.” He pauses, takes a long pull of a Marlboro cigarette, and continues. “Or doing perfect mixes. If it’s not in sync, fuck it — it still works. ‘This is what I wanna play.’ It doesn’t have to be one hundred per cent perfect, it has to be now.”

“For me it’s super easy to talk to her, because we understand each other. There’s no time for bullshit,” Zabelin says. The third key member of the Trip troika playing tonight, it’s Nikita Zabelin’s first ever gig in the US. He met Kraviz at Moscow’s Outline Festival in 2013, both sides feeling an instant musical kinship. Together, Zabelin and Bjarki are Nina’s foils, contemporaries, muses and conspirators. He talks of their relationship with a unique appreciation, at once fiercely proud and coolly detached.

“It’s a funny thing about foreigners, sometimes you go somewhere and they ask where you’re from, and you say ‘I’m from Russia.’ And they say, ‘Oh, Putin and Nina Kraviz!’” he laughs. “She is the symbol of New Russia, there’s no bears and vodka any more. She’s our symbol, not because she’s pretty or because she’s doing good music, but first of all because she represents Russian spirit.”

What exactly is the Russian spirit? “To be straightforward. To be honest. To keep your family close to you. To be cheerful, open, generous if someone needs it,” he explains. “But from the other side, if you do something wrong to us, bad things will happen. Don’t mess with Russians. Don’t wake up the bear!” 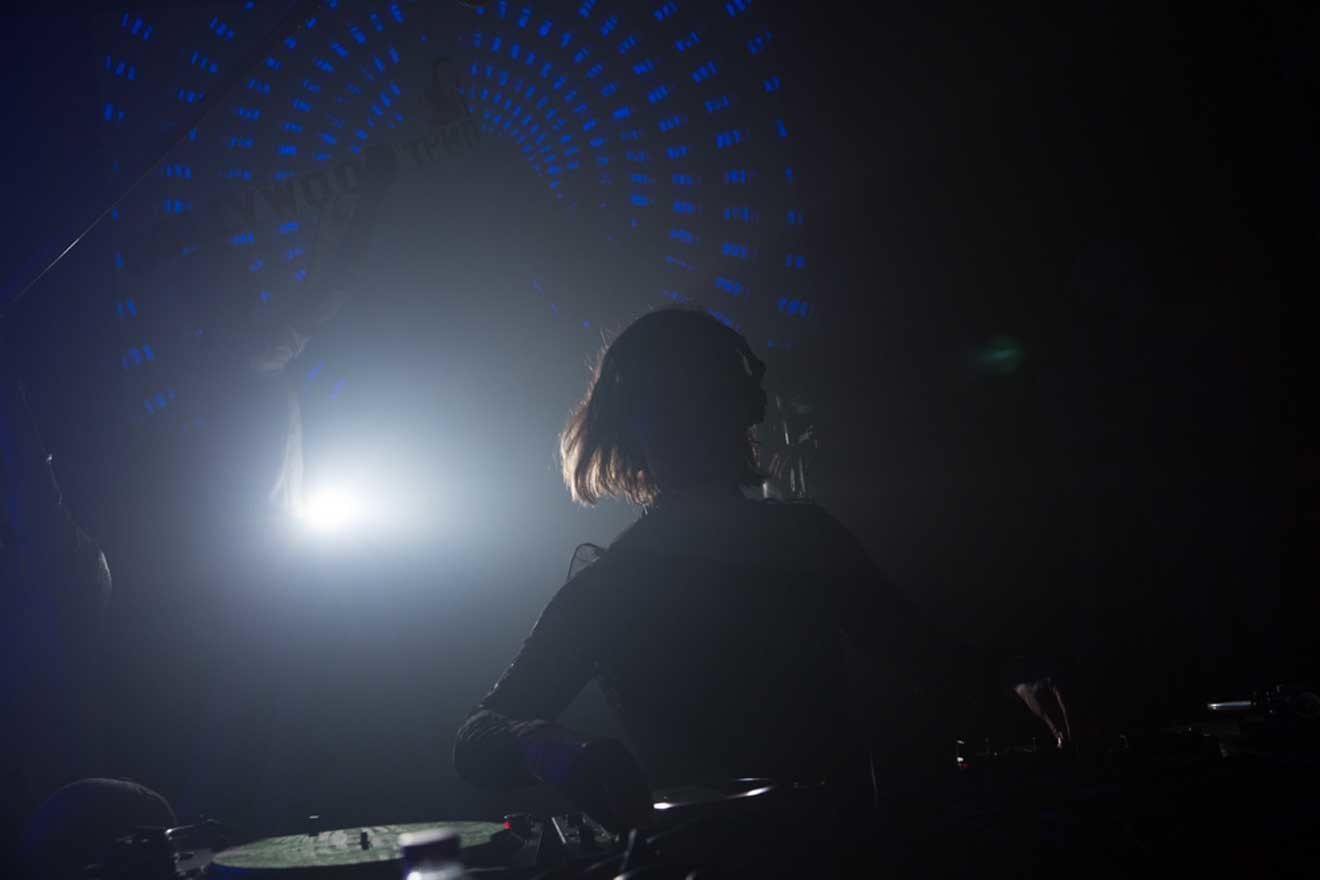 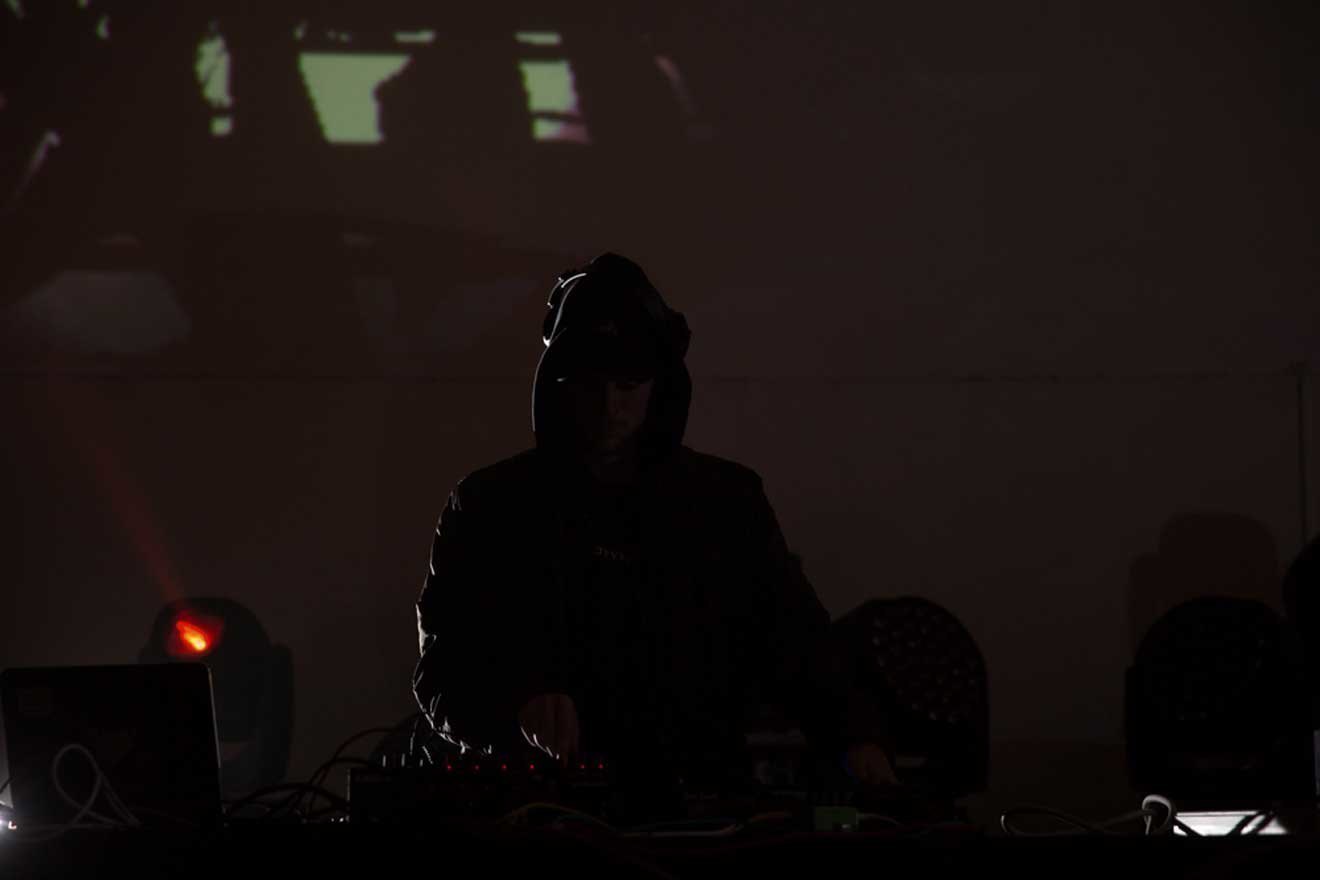 While these parties are certainly Trip events, Nina is reluctant to call them ‘Trip Parties’. For that designation, the events have to fulfil certain criteria. About the only ones that have qualified, in her eyes, are her famous Cave Raves in Iceland that have become the stuff of legend. Located on a dried volcanic lakebed, attending the Cave Raves requires everyone to huddle together in buses for a three-hour excursion from Reykjavik into the Mars-like remoteness of the island’s interior.

“This tour is not really a Trip party as I see it. What was in Iceland is definitely something that was one hundred and twenty per cent a Trip party: very small, unique, the location hidden until the very last minute,” she recalls wistfully. “But it’s really beautiful, because it has a lot to do with the word ‘trip’, you know? With transcending atmospheres, taking an actual trip to space. Or taking buses or trains, really it has a lot to do with what I’m doing in life. It all really clicked together. Also this mind-tripping, or travelling from A to Z. It’s all kind of a big word-play; that’s why I chose this word for my label in the first place, because it has so many different layers.”

The fact that all attendees had to huddle in a bus like a congregation and travel across space is an integral component to what makes something a Trip party. One wonders, though: why exactly is the literal journey so critical for Kraviz? 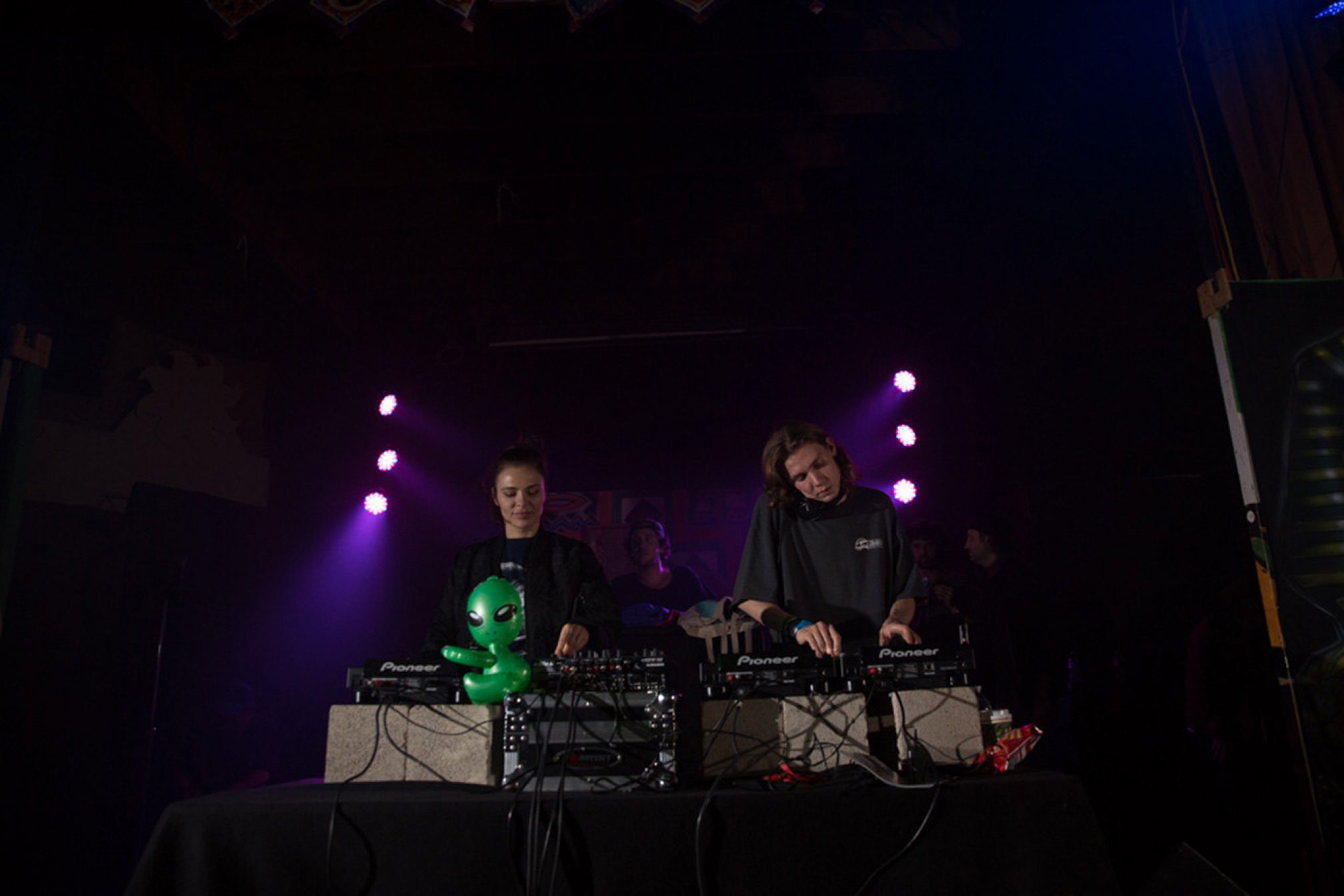 “I’ve thought about it many times, why I like to be on the road, on a trip. You know, I think it has a very close direct connection to imagination,” she says, taking a sip from a beaded beer bottle and pulling her black bomber jacket in tight to deflect the autumn chill. “When I was a little girl in Siberia I would imagine a lot of things; my imagination was crazy. And I would always imagine going somewhere. I will never forget the first times when I was travelling by plane, and how much excitement I used to get just by packing my things, and preparing for the journey. And I think the preparation for the journey was even more exciting than the journey itself. Because people normally can very rarely feel it at the moment it’s happening.

“I don’t know if you’ve ever felt something like this – you’re either anticipating something or remembering it. It’s a very big talent when people actually can feel excitement right at the time of the event. And somehow I always wanted to have this kind of parties, with my labels and music. I always wanted to concentrate on the moment, on the now.”

Just then another plane screeches overhead, its landing beams lighting up the night sky and its engines over-whelming our words. After it passes I look back at Kraviz to continue the conversation, but she’s a million light-years away. Eyes twinkling, smiling up at that huge metal body – so fast, so elegant, so effortless – as if it were the first time she’d ever seen one fly.