Having spent the past 20 years representing the crème de la crème of off-kilter UK electronic music, Eat Your Own Ears has more than earned its reputation for throwing seriously good parties. Starting life at Brick Lane's 93 Feet East in 2002, the promoter has gone from founding popular London festival Field Day to hosting stages at events such as Parklife, all the while maintaining a steady flow of unforgettable parties at Printworks, Alexandra Palace, The Warehouse Project, Village Underground, and more.

This year EYOE is celebrating two decades of operation, marking the occasion with a compilation EP featuring Four Tet, Floating Points, Caribou, Metronomy, and Mount Kimbie — alongside a massive birthday knees-up at The Warehouse Project in Manchester on November 19. Headliners include Four Tet playing b2b with Floating Points and live sets from DJ Seinfeld, Leon Vynehall and John Glacier. The whopping line-up at the Depot will also see Overmono, TSHA, I. Jordan, Erol Alkan, Tarzsa and Piri & Tommy. Over in the Concourse, Folamour, Joy Orbison, Jayda G, Romy, Daphni, Logic1000, SNO and Aletha are set to show off their skills, while at the Archive you can catch, Gracie T b2b DJ Priya, Jossy Mitsu, Two Shell, Ela Minus, Elkka playing live, Barry Can’t Swim and Anish Kumar.

As Eat Your Own Ears gears up for its biggest ever birthday party, we took a trip down memory lane with founder Tom Baker. Get tickets here and read the interview below.

What was behind the decision to hold the Eat Your Own Ears birthday at The Warehouse Project?

Eat Your Own Ears have always hosted a night at The Warehouse Project and I've always been very involved in that and the artists that are on the line-up. This year, everyone was very conscious of making this line-up stand out. If you’re into this sound, then this is the place to see Four Tet, Joy Orbison, Floating Points and it's not spread thin. We wanted to build out of that and add Folamour, Romy, and make it slightly different to some of the nights we've curated in the past. Then, brand new stuff like John Glacier and I. Jordan who have a slightly different angle with the live stuff.

[The Depot] is an incredible location and it's got mind-blowing production, also people turn up really early as well — right from doors open. There's a real feeling of anticipation and excitement until the end of the night. I think celebrating the anniversary outside of London, when we mostly promote there, felt particularly exciting. I like that we didn't go down the obvious route.

The teaser artwork for the party had everyone talking on social media...

Tom Phillips has been designing for Eat Your Own Ears, he's a close friend and someone I really value his approach. I told him it's a blank page just do what you want and we just went with the one with the most chaotic because we just felt that's the one that would get people talking. It was great when Four Tet shared it on Instagram and it got on Reddit. People were like, “what is this? Is this a show? Is it in America?” And then we built up the excitement, and finally released the second artwork, which is much clearer and cleaner I felt very proud of that. And it's always great working with Sam and The Warehouse Project. They are just such good people. And it's great to build something new that we are gonna do every year.

What other times have you worked with The Warehouse Project?

The first one we did, which was in 2006 I think, was when The Warehouse Project was in Boddington's. I remember it was with the Transgressive label so it was like Foals and very live. It was freezing cold, I remember that. I think the beer might have run out maybe. And then every year, we would do different line-ups. I mean, Four Tet has pretty much done them every year. One special one we did was with Thom Yorke DJing. Then to all of our surprise, he suddenly came out in front of the decks and started singing Radiohead songs. No one anticipated that. I mean, he asked for a microphone, so we thought he might speak, but we didn't expect him to like start singing. So that was pretty special.

The back-to-back with Four Tet and Skrillex was also pretty epic. I mean Skrillex is just a force of nature. When he gets on those decks it's like a Lamborghini turning up. I remember the stage was almost shaking with the energy in the room. 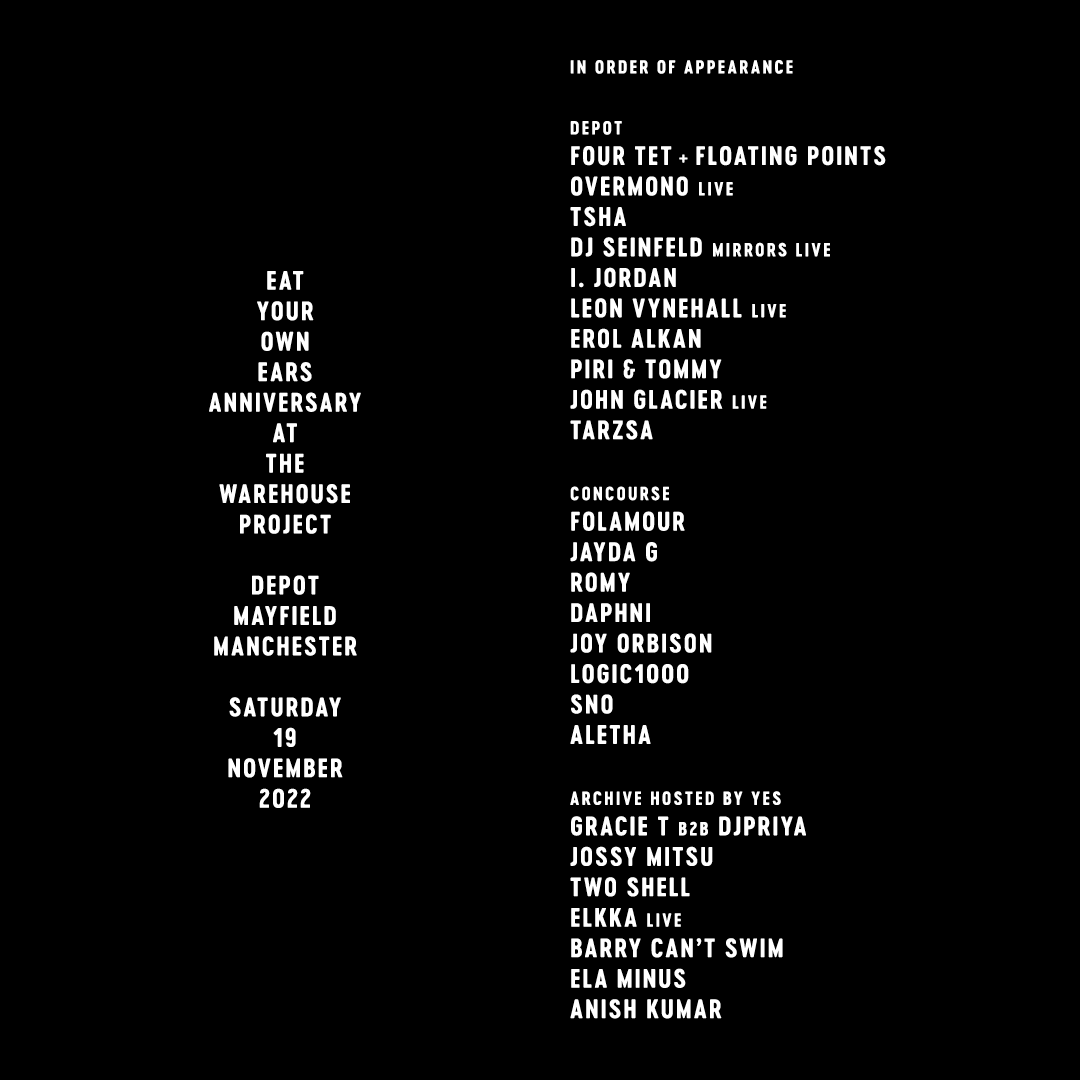 Can you tell me how you started with Eat Your Own Ears?

It all started at 93 Feet East in Brick Lane when I met a guy who worked at 93 Feet East, when I was flyering for a festival. He was like, “Have you ever thought about putting on your own nights?” And I was like, “Well, I don't really know how to do it.” And he was like, “Well, I'll help you if you come up with a concept.” So I thought of the concept and it was basically calling independent labels and showcasing their new signings alongside some of their more established artists to sell the tickets. And that’s how it grew. I gradually just built up a reputation and I guess also contacts, and relationships with artists and agents. I started promoting some of the artists as standalone shows, Four Tet and Caribou being two of them. I then founded Field Day festival in Victoria Park, the founders aren't involved anymore, but we founded that and ran that for 12 years or something.

How does it feel going from running events to becoming a label?

I always wanted to start a label, but I just felt that I didn't have enough time or head space I guess, one of the positive things that came out of lockdown was to think: “What else do I want to do within the world of music?” I knew I wanted to do something and I always loved labels and thought that's maybe something I should explore. I spoke with Jim Chancellor of Virgin and we connected and it just felt like the right fit. Ironically, I was in a band years and years ago and Jim Chancellor was running Fiction Records and looked to sign the band back when I was 17. So it just felt like a full circle thing.

At the moment, we're putting out four Eat Your Own Ears, EPs, with limited hand-printed cassettes, showcasing all the artists we've worked with over the years of all the genres. Then that will finalise and culminate in a vinyl early next year. We're learning a lot and it's exciting to learn something new, and do something creative and also do something from the other side.

It's always been very much about music we like and listen to and have a passion for, and the label will very much be the same. It'll be a broad mix of musical genres. Not one sound, but I think it'll be things we're passionate about and excited about. It's obviously a very competitive world and it's new for us.

The first thing we did sign is an artist called BLOODMOON. It's a joint venture with Future Classic, the Australian-based label and BLOODMOON from The Temper Trap and Jono Ma from Jagwar Ma and various other producers. It feels like starting point.