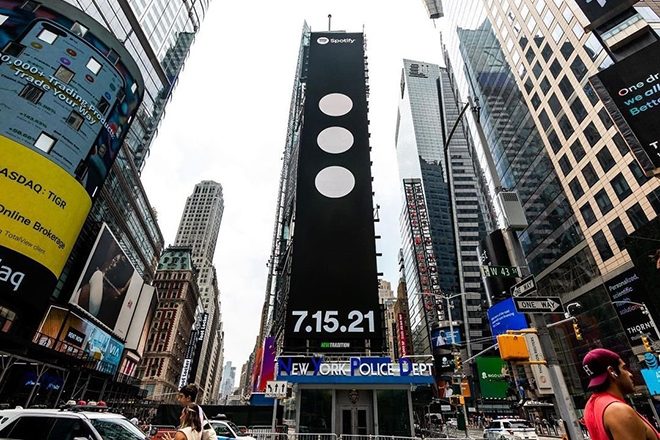 Cryptic billboards began popping up all over the globe this week teasing new music from the Swedish EDM trio, Swedish House Mafia.

Read this next: Swedish House Mafia's pyrotechnics at Creamfields caused millions in damage

There have since been several hints that Swedish House Mafia will be releasing a new single featuring Ty Dolla $ign and 070 Shake called 'Lifetime'.

NBC has confirmed that Swedish House Mafia, Ty Dolla $ign and 070 Shake are set to appear as the musical guests on the Tonight Show Starring Jimmy Fallon next Monday, July 19.

Swedish House Mafia - consisting of Axwell, Steve Angello and Sebastian Ingrosso - have not released any music since 2012.

The first teaser sign appeared in Melbourne, where fans speculated about the prospect of new music. In a similar fashion to the posters which popped up previously in Miami pointing toward the trio’s reunion, these posters are suspected to tease a new release.

Underneath the logo, the date is printed "16 / 07 / 21". Over in New York, the poster took up an entire billboard in Times Square (pictured), accompanied by the Spotify logo.

The last release from the band came almost a decade ago with their second album, ‘Until Now’. Earlier this year, the group teased some snippets from the studio on social media hinting toward the trio’s return.

In their typically ambiguous fashion, SHM have previously released cryptic posters linking to upcoming announcements, including posters left in 2019 ahead of their reunion world tour, ‘Save the World Reunion Tour’.

Swedish House Mafia is releasing a new record this Friday confirmed by a source close to the Swedes. 👀 pic.twitter.com/X7OkBSI21n

The first teaser poster was put on Twitter on Saturday, with a caption reading: “Swedish House Mafia is releasing a new record this Friday confirmed by a source close to the Swedes.”

Fans replied, “I’M SCREAMING” and “don’t do this, don’t give me hope”, while another pointed out that Axwell had been liking posts on Instagram which linked directly with the new posters.