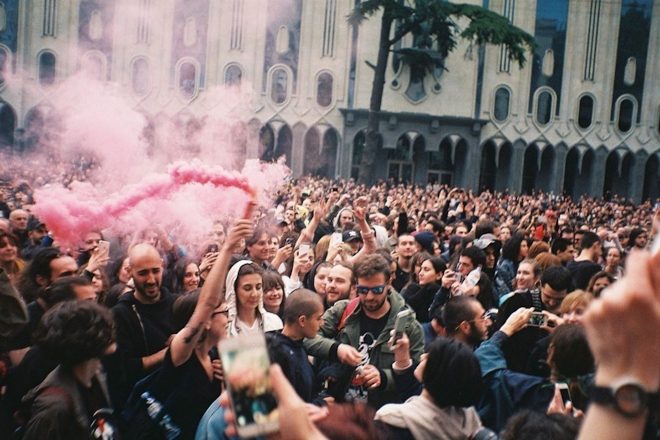 A new documentary video by the BBC has highlighted the "rave revolution" taking place in Georgia.


In May 2018, right-wing political groups were calling for the closure of Tblisi, Georgia's famed nightclub Bassiani, a venue that has faced a struggle against political forces to remain open throughout its short but impressive history. Later that same month the club, along with Café Gallery, was hit with armed police raids and was forced to close, which sparked outrage from the rave community and DJs around the world.

The club closures then prompted thousands of Tbilisi's raving community to hit the streets to protest, holding banners claiming ‘We dance together, we fight together!’ and blasting techno through the night. A festival-like crowd gathered outside of the Georgian parliament - soundtracked by joyous dance music. Protestors were calling for the resignations of both Georgian prime minister Giorgi Kvirikashvili and minister of internal affairs Giorgi Gakharia.

The protests showcased the solidarity of the rave community in Georgia and proved that peaceful gatherings can have a positive affect. Giorgi Gakharia pledged to investigate police brutality and apologized for the events that took place during police raids. Bassiani and Café Gallery would later reopen, but club culture's fight against Georgia's right-wing political groups is far from over.

Watch the documentary below for an in-depth look at the "rave revolution" taking place in Georgia.