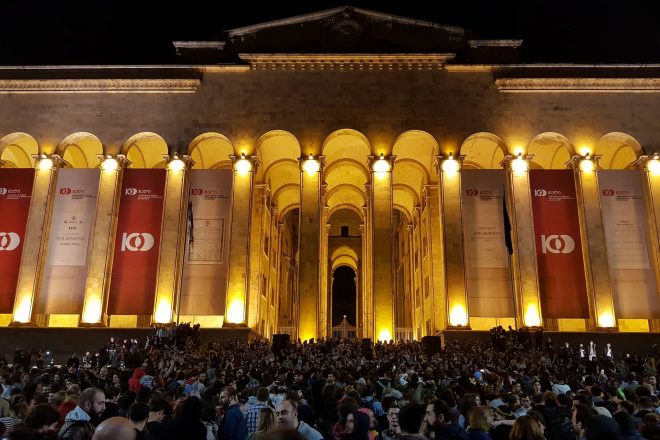 Two of Tbilisi’s most notable electronic music venues Bassiani and Café Gallery were hit with armed police raids this weekend.

Police stormed the clubs early Saturday morning (May 12) in reaction to a string of drug-related deaths that have occurred over the past two weeks, as reported by Resident Advisor.

Despite occurring outside of the clubs, authorities are said to have claimed a link between the tragic deaths and the dance music venues.

As reported on Friday, Bassiani released a statement discussing threats of closure and suspected smear campaigns from right-wing groups.

Taking to Facebook prior to the raids the club wrote, “BASSIANI / HOROOM is a collective movement that stands at the forefront of the social changes and speaks loudly regarding the inequality in the country, high level of injustice and discrimination. Because of those declared values, the club has been targeted by the right movements, which have in return launched discrediting campaign against the club.”

The club has since released another statement, discussing the arrest of "approximately 60 people” including Bassiani co-founders Tato Getia and Zviad Gelbakhiani.

A BBC News report filmed protestors dancing in the streets of Tbilisi, forming a festival-like crowd outside of the Georgian parliament soundtracked by joyous dance music. Protestors are calling for the resignations of both Georgian prime minister Giorgi Kvirikashvili and minister of internal affairs Giorgi Gakharia.

Bassiani co-owner Zviad Gelbakhiani heavy-handed arrest was filmed and posted on social media during the sting, as seen in the footage below alongside further footage from the protests.

After #Bassiani raid youth danced for equality in front of parliament building in #Tbilisi pic.twitter.com/8jarzPVUQn

Police raided Night clubs in #Tbilisi last night and they received an open air electronic festival in front of the Parliament instead. #Basiani #Georgia pic.twitter.com/RpOEJaNcc9