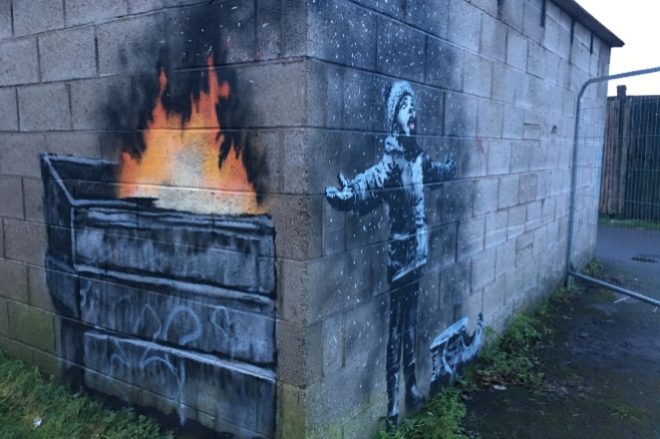 Banksy mural Seasons Greetings is reportedly leaving Port Talbot, in South Wales, to be used as part of an exhibition in Peterborough.

According to BBC News, this has allegedly sparked a row between the owner and the local council who have left the owner "no choice" but to move it.

The mural appeared on two sides of a steelworkers garage one night in 2018. One side depicts a child enjoying the snow falling, the other side reveals that it was from a fire emitting ash.

Seasons Greetings is said to have attracted around 20,000 visitors within the first month of its appearance - this sparked concerns for the mural's safety.

Seasons Greetings was then bought by art dealer John Brandler for a six figure sum, it was then moved to an unoccupied shop in Ty'r Orsaf to be viewed by the public.

According to John Brandler, this decision to remove the piece from South Wales has been "forced upon him" by the council.

On Thursday, Neath Port Talbot council said that the arrangement to keep the mural at the unoccupied shop is coming to an end. It is due to end on January 14.

"We understand that Season's Greetings is to feature in a street art exhibition in Peterborough due to start next month," a council spokesman said.

"The future of Seasons Greetings is now, of course, a matter for Mr Brandler," it said.

Brandler said that the council leaves him "no choice" but to move the mural before January 14 due to the high demand for the commercial space.

"Whether the Banksy leaves Wales and goes to Peterborough, or several other locations, who have expressed the desire to have it, the decision has been forced upon me by the council," John claimed.

"I didn't instigate the removal of the Banksy, the council did and I wish them the best success for the town in the commercial space."

Steelworker Ian Lewis said that it would be a "shame" for the mural to be moved from the local area.