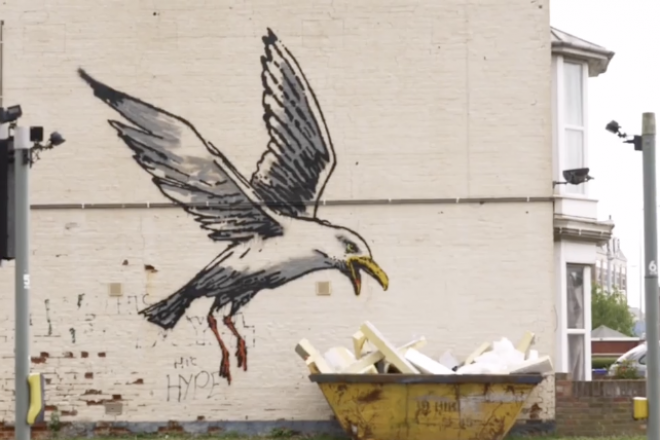 In a new Instagram post, Banksy has revealed that he was behind a new series of artworks in seaside towns in the UK.

A Great British Spraycation documents Banksy travelling from town to town creating the artworks, which include a rat in a deckchair holding a cocktail, two people dancing positioned to appear above a bus stop, and a seagull diving for chips made out of insulation material inside a skip.

The tour took the artists from Lowestoft to Cromer, Great Yarmouth, and a number of other seaside towns. The artist is known for his political commentary through the medium of art, with many of his works taking aim at the government.

Earlier this year, the artist raised £16.7 million with for healthcare with piece of a child playing with a toy nurse.

One of the artworks has since been defaced, with his piece in Lowestoft being smeared in white paint. Speaking about the incident, a spokesperson for the council of East Suffolk said:

“We are naturally appalled someone has chosen to behave in such a selfish and mindless way, given how excited we are all by the appearance of these works here on the east coast."

She continued: “"In the interim, we have also employed security patrols to visit each site and on this occasion, our patrols actually interrupted the individual defacing this work and prevented any further damage occurring."

Watch the film below.