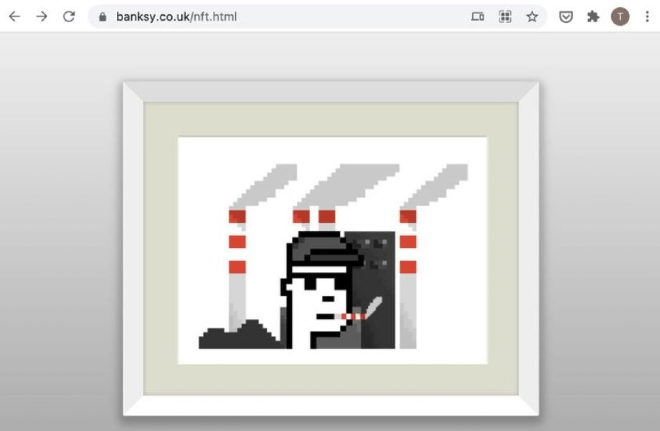 A fake Banksy NFT was sold to a British collector for £244k.

The online auction was advertised by a hacker on the artist’s official website, via a new page titled ‘NFT.’

The con artwork was called ‘Great Redistribution of the Climate Change Disaster’ and depicted a pixelated figure smoking a cigarette in front of a row of identical power station chimneys. Significantly outbidding other fans, the buyer reported thinking he was purchasing the esteemed graffiti artist’s first-ever NFT.

An NFT refers to a unique digital token that can be bought and sold. Digital artworks can be sold as an NFT. Whilst digital art can be replicated, it can be tokenised, meaning buyers of NFT artworks have a digital certificate of ownership.

Speaking to the BBC, Banksy’s team said that: “any Banksy NFT auctions are not affiliated with the artist in any shape or form.” The page that led fans to the NFT on banksy.co.uk has since been deleted.

The buyer says the fake seller returned all the money paid for the NFT, except for the transaction fee of around £5,000.

He told the BBC: “It does seem to be some hack of the site. I confirmed the URL on PC and mobile before bidding. I only made the bid because it was hosted on his site.

"When the bid was accepted I immediately thought it was probably fake," he added.

Earlier this year, Grimes made headlines for selling a line of NFT digital artworks. The collection, which included video pieces and images, was sold for almost $6m.