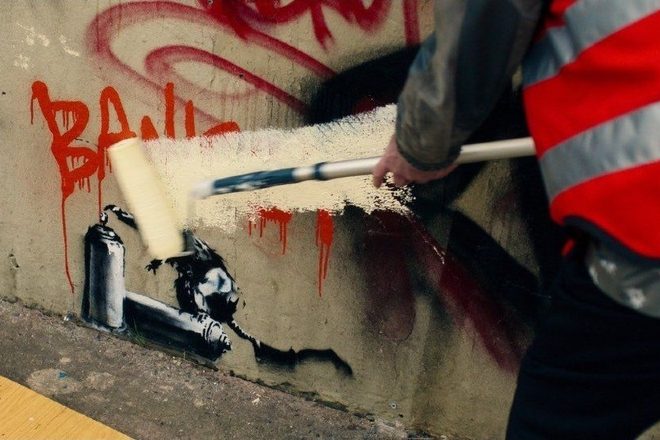 Christopher Walken has destroyed one of Banksy’s original artworks on the set of the BBC drama, The Outlaws.

The graffiti marked the wall of a Bristolian building, where one of Banksy’s famed rat paintings sat on top of two spray cans with the tag ‘Banksy’ just above it.

Although the piece was estimated to be worth around £10 million, it was reportedly made specifically for the filming of the new BBC drama.

In the six-part series, Walken paints over the multi-million-pound artwork, “ultimately destroying it”, according to a BBC spokesperson.

“We can confirm that the artwork at the end of The Outlaws was an original Banksy and that Christopher Walken painted over that artwork during the filming of this scene, ultimately destroying it,” they said.

In the finale episode of the Stephen Merchant-directed series, which was released on October 25 this year, Walken asks his supervisor whether he should paint over the Banksy piece while completing community service.

He responds with his back turned that all graffiti must be rid of, leading to Walken destroying the artwork on camera. The artwork was estimated at £10 million.

Banky’s self-destroyed artwork, ‘Love Is In The Bin’, also went on sale the month earlier, estimated to fetch around £6 million at auction - six times the amount it originally sold for.