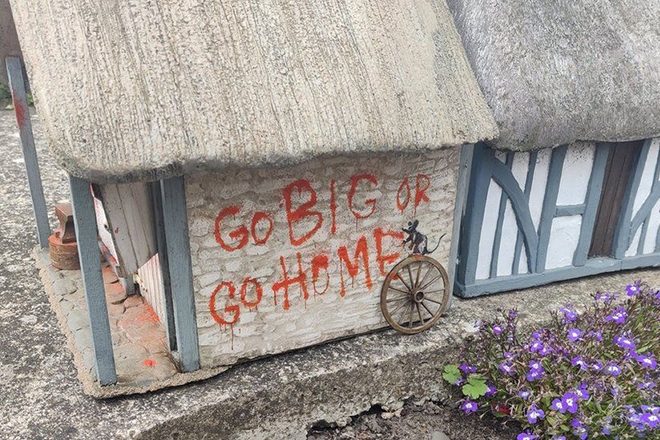 A number of new artworks suspected of being created by elusive street artist Banksy have appeared in England.

Many of them are in the East Anglia area, in the towns of Gorleston Great Yarmouth in Norfolk and Lowestoft in Suffolk.

One depicts a child holding a crowbar next to a broken pavement slab and pile of sand, another shows an elderly couple dancing next to an accordion player above a bus shelter, another shows an amusement arcade-style toy crane with its jaws wide open above a bench, and another shows children in a boat on a bride, using a metal sheet (which has since been removed) in front of a wall as the boat shape.

Images of a rat reclining in a deck chair, a shell-wearing hermit crab holding a sign saying "luxury rentals only" and a gigantic seagull poised as if to descend onto a skip have also appeared.

Speaking about these artworks, Banksy expert professor Paul Gough of of Arts University Bournemouth said he’s “pretty sure” the works are legitimate Banksy creations, conceding that if not then “they are very good fakes.”

He added: "Banksy has clearly been enjoying an East Anglian staycation: these are very sophisticated stencils showing an artist at the top of his game.

"The paintwork is distinctive; the drawing is really sharp; even the dance steps are convincing.

Read this next: Banksy loses copyright to West Bank artwork after refusing to reveal identity

"As always with Banksy, the context is crucial: he chooses his sites carefully, and these three are beautifully located.

"The three works speak to different generations of viewers: young children, seniors, and those out to have a great time after 18 months of lockdown. Perhaps the child with the crowbar is a symbol of us all being released from the pandemic."

What a treat for Lowestoft! Banksy or not, these incredible pieces of art sure are a talking point! Images courtesy of @amjbarnesy #banksy #streetart #graffitiart #lowestoft #greatyarmouth pic.twitter.com/meUSFtBlDd

Another in East Anglia is at the Merrivale Model Village, with “Go Big Or Go Home” and “Banksy” branded in orange paint on a miniature thatched cottage (which does not belong to the model village) alongside a small rat - a trademark of Banksy’s.

Owner Frank Newsome told the BBC: "It's not one of our cottages. Someone has brought it in.

"I'm a layman but we've Googled it and it does look genuine so we're now trying to ascertain via the Banksy website whether it is or it isn't."

The miniature building is going to be kept on display for visitors, but withdrawn and stored in a secure location at night.

Read this next: Banksy supports wearing face masks with artwork on the London Underground

The Crawley Observer and West Sussex County Times also report suspected Banksy artworks have popped up in the West Sussex town, depicting a child riding anti-lockdown graffiti like a charging horse and a girl running next the words “Live, Laugh and Love!”.

Banksy has not verified or denied any of the artworks yet. He usually claims responsbilty for his work on his Instagram page and website.