Banksy is an anonymous, subversive street artist, political activist and film director. His first satirical freehand graffiti appeared in Bristol in the 1990s and towards the end of the decade he started using stencils to create his own distinct style. Since then, he has risen to become the poster boy of the street art movement (despite remaining anonymous).

Over the years, he has captured the public’s imagination with controversial murals, a mockumentary (Exit Through the Gift Shop) focusing on the new explosion of street artists, compelling canvases, thought-provoking installations and astonishing mobile exhibits; often including key characters, notably apes, children, police and rats, to combine dark humour with politics and popular culture.

Read this next: Here are all the items you can buy from Banksy's online shop

Having developed a cult following, he is widely recognised as one of the most important artists of our era. Art collectors revere his work, and many believe that no modern collection is complete without a Banksy piece.

His ‘Devolved Parliament’ oil painting recently sold for a record £9,900,000. The prices Banksy’s works are starting to receive contrast with his ethos as an unidentified artist who often exhibits his work on walls, large buildings and his own physically built props in public places.

There is no contemporary artist who uses the power of street art and design to relay contentious political statements and moving messages quite like Banksy does. He has become a counter-culture icon in many social contexts. Here are his five most controversial moments of the past decade: 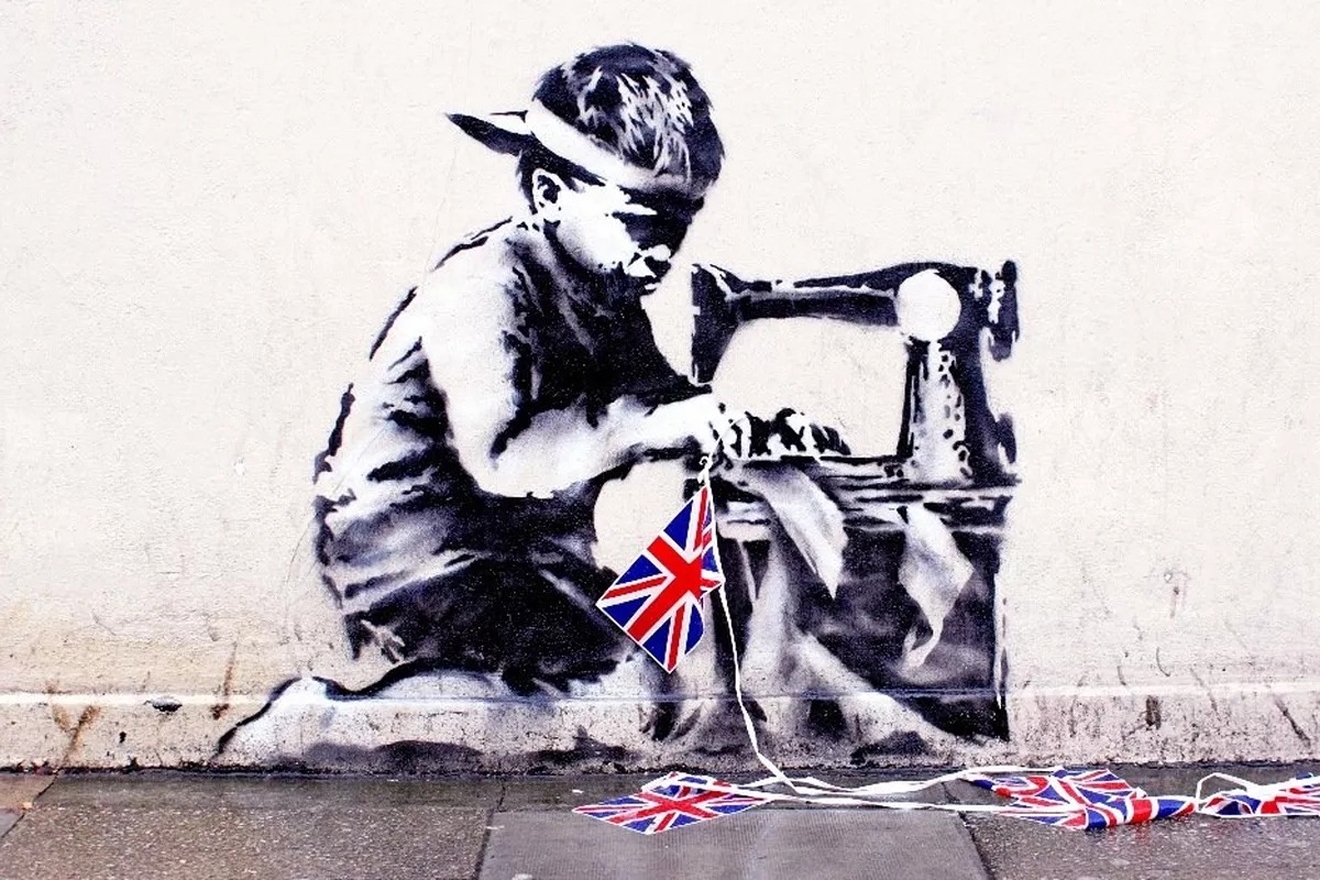 Amidst all the London 2012 celebrations, Banksy was on hand to dampen the mood with his anti-consumerist attitude, using his art to bring attention to the hostility of sweat shops. ‘Slave Labour’ was spray-painted on the side of a Poundland in Wood Green. It portrays a young child using a sewing machine to produce Union Jack flags, acting as a striking reminder of the dark, inhumane measures taken to produce mass merchandise for the Queen’s diamond jubilee and the London Olympics. 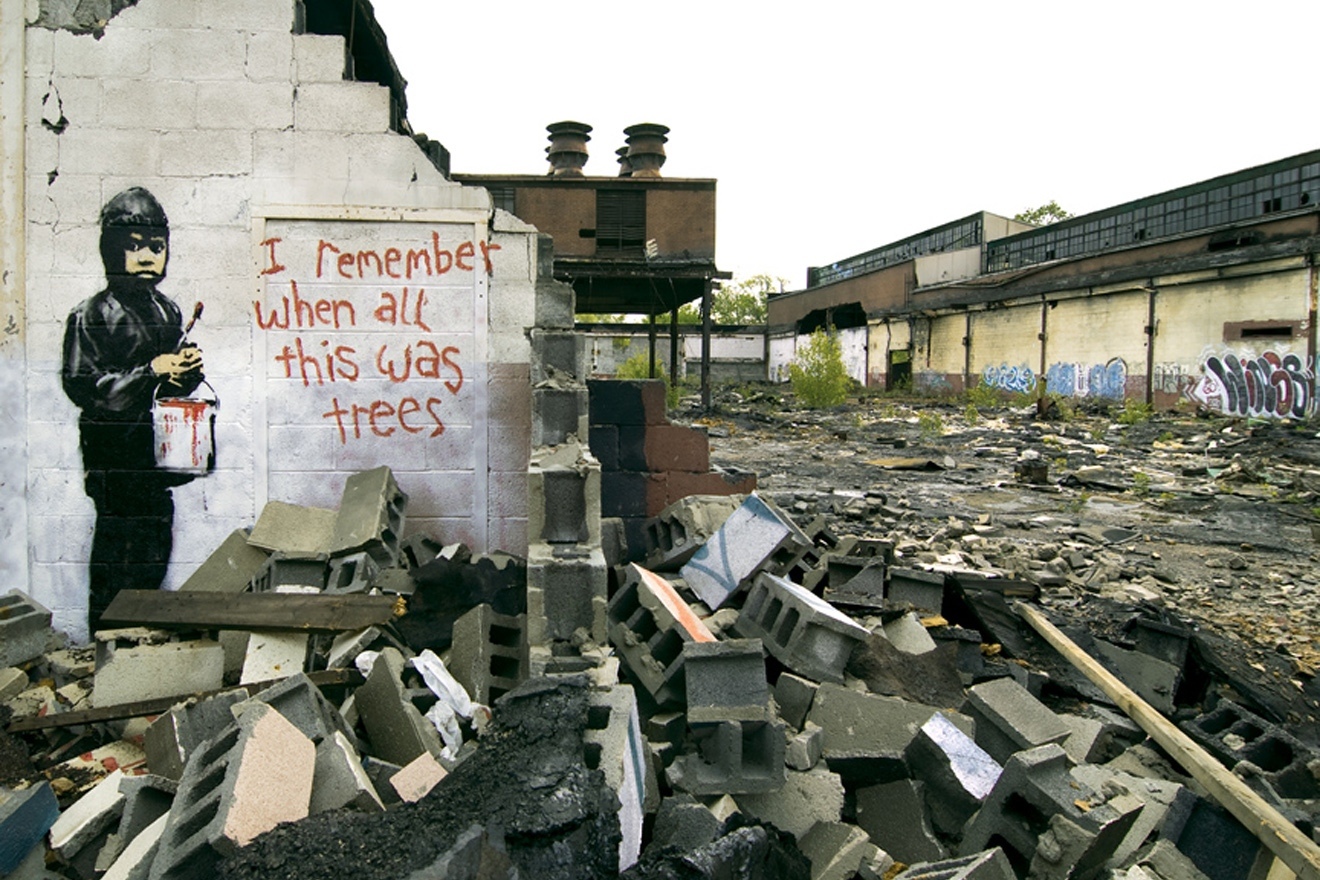 Thecity of Detroit, home to the likes of Moodymann, Omar S and Theo Parrish has gone through major economic and demographic decline in recent decades. In 2010, Banksy delivered a poignant message for the ongoing social and economic hardship within the city when he painted “I remember when all this was trees” in red letters beside an image of a despondent young boy who confronts the viewer, holding a paint can and brush. Spotted on the side of a derelict building outside of the deteriorated Packard Plant; the creation highlighted how after mass deforestation and loss of nature, Detroit has devolved to dust and is nothing like it ever was. 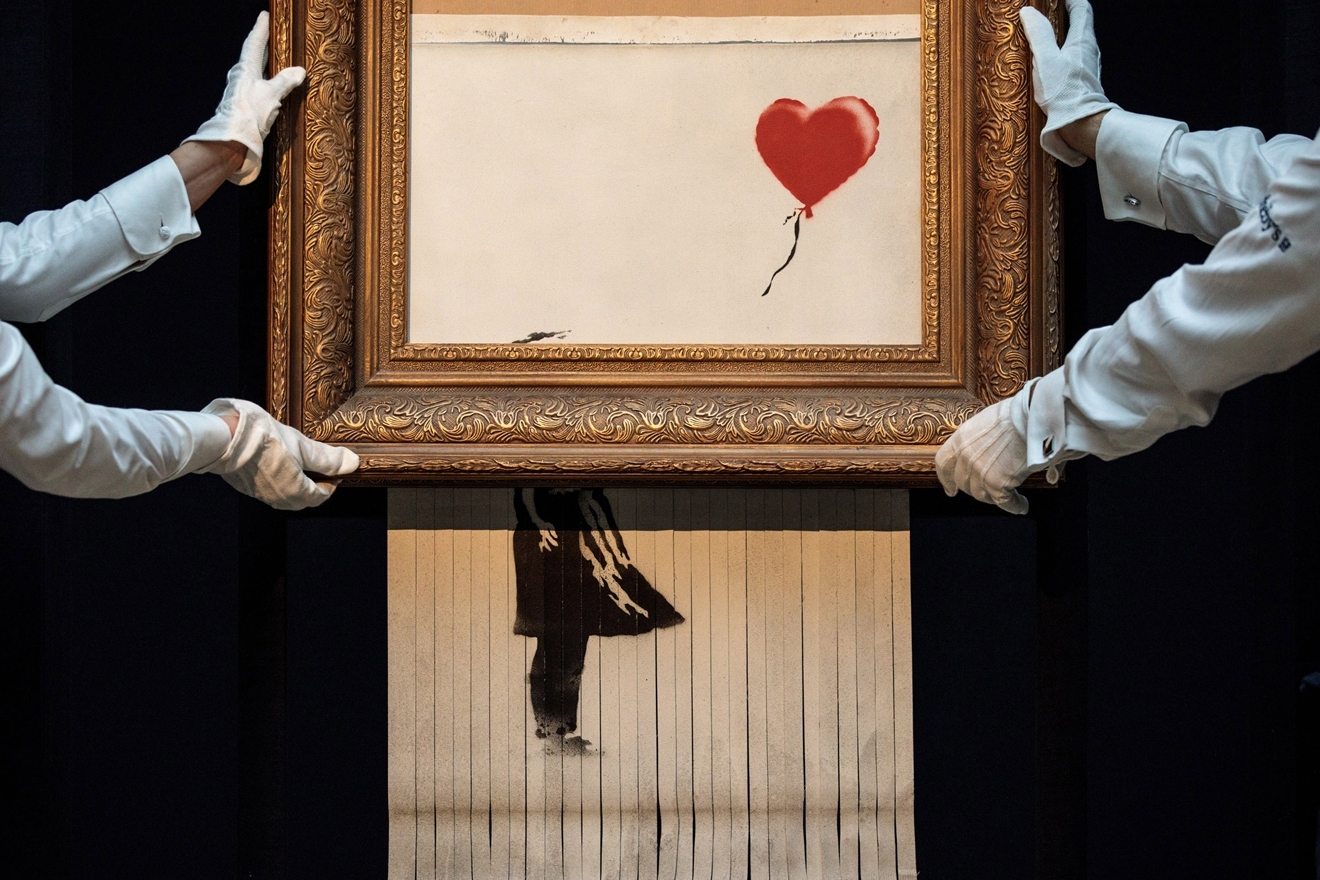 ‘Girl With Balloon’ is one of Banksy’s most popular paintings. The mural of a monochrome little girl reaching for a red heart-shaped balloon represents love, hope and innocence. Last year, the piece self-destructed moments after selling for more than £1 million. Banksy had installed a shredder into the frame prior to the auction and the shocked Sotheby’s crowd watched on as the painting slowly shredded into a dozen strips. This Banksy stunt was one of the finest moments in auction history. It offered a criticism of the sky-high prices his work is starting to realise and how art has become a commodity owned by the rich. But ironically, some experts say the piece is worth even more now. 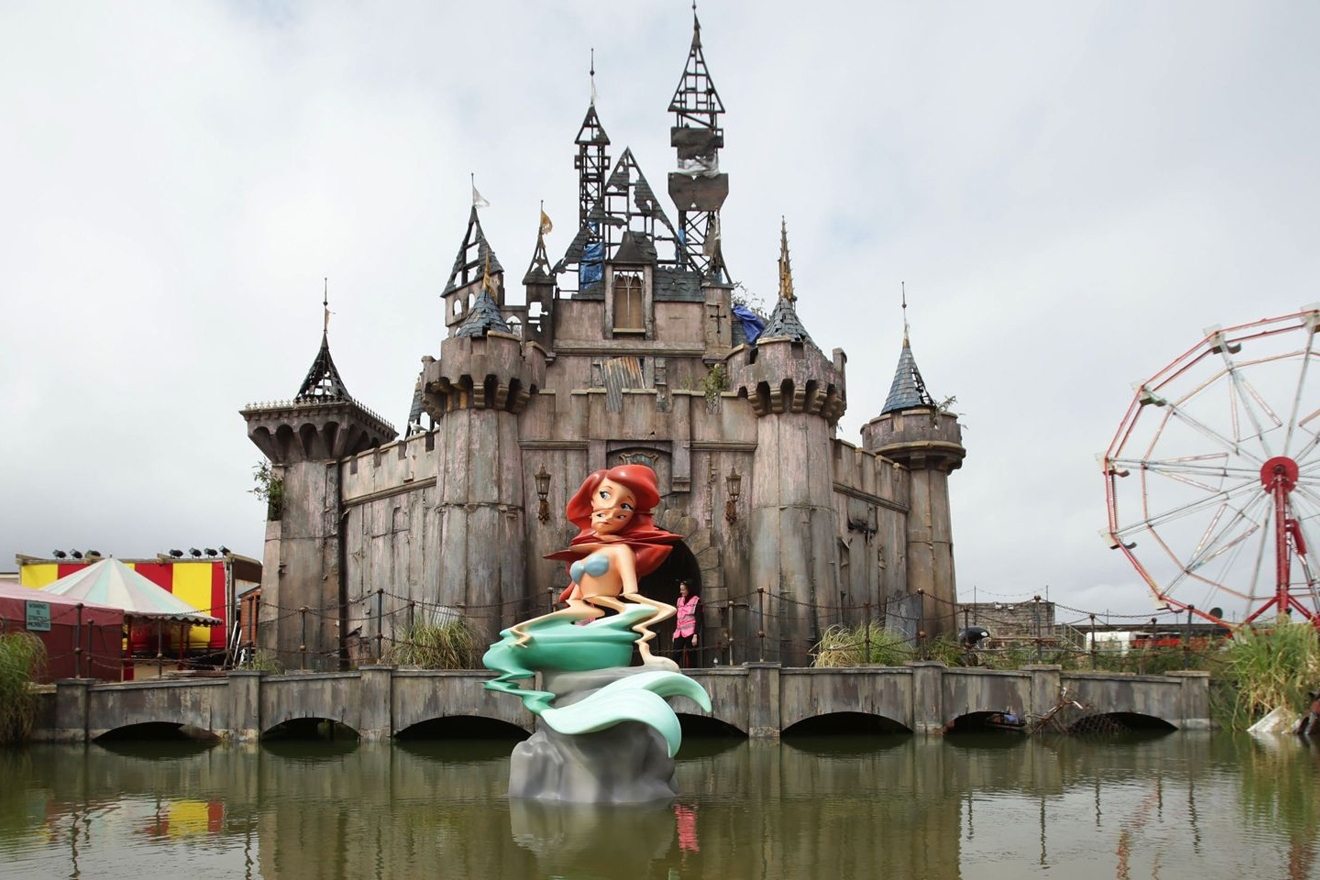 In 2015, Banksy installed an eerie bemusement park in Somerset called Dismaland. Available to experience for £3 per person; prominent features included a carriage-crashed Princess Cinderella, a warped, visually stimulating version of the mermaid-queen Ariel and a refugees boat game. The pop-up exhibition acted as a burst of reality, encouraging visitors to take a real look at the world we live in, instead of the Disney perspective, with a clear emphasis on refugees in aid. All building materials were recycled into shelters for homeless migrants and Banksy says the unhelpful fed-up staff who ran the park were “sent back to Virgin customer services”. 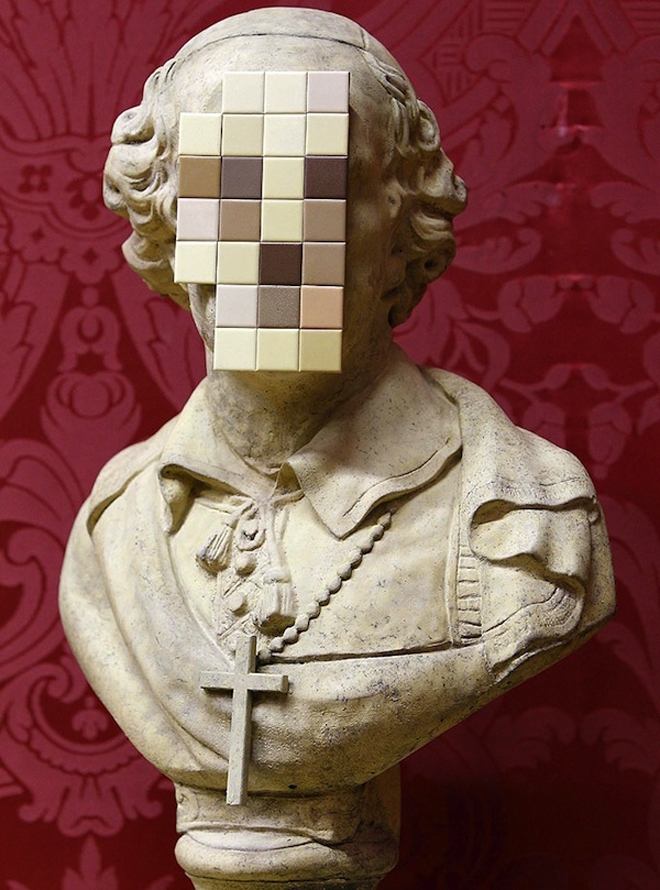 In 2011, Banksy decided to attack the most powerful organisation in the world – the Catholic church. ‘Cardinal Sin’ was unveiled at the Walker Art gallery in Liverpool in light of the child abuse scandal within the Catholic church and its subsequent cover-up. He re-designed a replica 18th century stone sculpture of a priest, replacing its face with obscuring, pixelated tiles, giving the impression of a suspected criminal. If the design wasn’t enough, the tagline “it's easy to forget the true meaning of Christianity – lies, corruption, abuse” is a wildly controversial attack on what Christianity stands for

Whilst you wait for Banksy’s next controversial move, read about his recent pop-up shop in Croydon which featured Stormzy’s Union Jack stab vest and a Massive Attack cushion here.