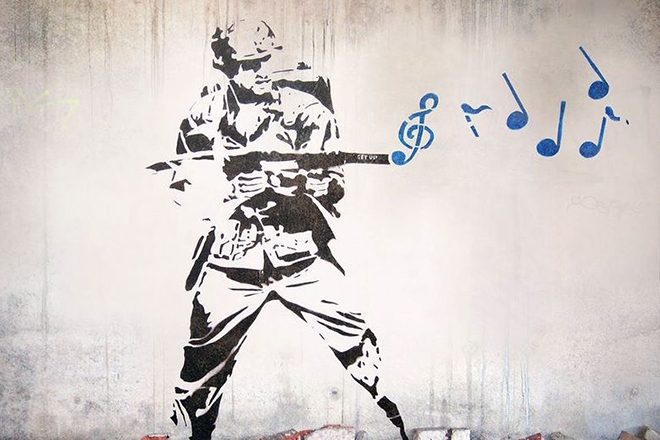 Banksy has announced he is embarking on a DJ tour of music festivals this summer.

The planned set has been described as a “hybrid DJ, art and interpretative dance show”, fusing elements of Bristol’s musical heritage and street art culture, with nods to iconic symbols of the city, including Turbo Island, anti-Stokes Croft Tesco protest footage, and white dreads.

Banksy said he will be playing mostly “140 BPM dubstep wobblers picked up at Idle Hands over the years”.

Rumours of a collaborative track with Massive Attack’s Robert Del Naja, aka 3D, who has himself long been rumoured to be Banksy, have also ignited online, after Del Naja dropped hints in a recent interview.

“I’ve been in the studio cooking up something with a friend recently,” he told local Bristol publication Crust Weekly. “I can’t reveal details just yet because he’s quite shy, but it’s going to be unveiled this summer.”

When pressed on who the mysterious collaborator is, Del Naja confusingly said: “It’s someone who is definitely not me, OK?”

Read this next: Is Massive Attack member Robert Del Naja the real Banksy?

In a press release announcing the festival tour, Banksy said he was inspired by Hyperdub artist William Bevan aka Burial to make the move into music.

Naming “Burial’s selfie reveal” as an inspiration for “stepping into the limelight” and giving the world a Banksy DJ show, he said: “I feel like me and Burial have got a connection. Two kindred spirits running the worlds of street art and music, peerless in our time and yet so humble in avoiding public attention.

“I was hoping he would start playing some shows when he revealed his face, but since he’s not bothered, I realised a Banksy DJ show would be the only thing that could potentially top it. It’s gonna be super fucking political as well as banging tunes.”

Read this next: Did Goldie just reveal Banksy's real identity?

In a masked video announcement hosted on his Finsta, which was filmed in front of a backdrop showing a syringe and needle with “Art” written on it vaccinating a map of the UK, he added: “I just hope the public are able to interpret the subliminal messaging”.

Details of what festivals Banksy is set to appear are yet to be disclosed, however there’s a rumoured booking at Unsound’s Salt Mine venue in the works, as well as a Banksy curated stage at Download Festival.