A protest without politics?: We went to London's Save Our Scene march - Features - Mixmag
Home Latest News Menu

“We can’t really get involved, but I believe that everyone is entitled to their right to protest,” says a policeman while shepherding troves of people through the streets of central London. In every which direction, whistles are blowing, placards line the streets reading ‘LET US DANCE’ and ‘SAVE OUR INDUSTRY’, and soundsystems blast music from tiny vans, slowly making their way through drunken crowds.

Music heads and ravers alike joined forces on Sunday in a protest that filled every street of London’s West End. The Freedom To Dance march saw upwards of 20,000 attendees - some even estimated closer to 50,000 - although the official turnout figures are unclear. Organised by the fresh-faced campaign Save Our Scene, which was founded last year by George Fleming who admitted to us “this protest was only set up around eight days ago”, the turnout was staggering. As London’s streets became packed out across the weekend with an Extinction Rebellion march and Trans Pride parade just down the road, the country looked on at the masses marching for their beliefs in the capital city. 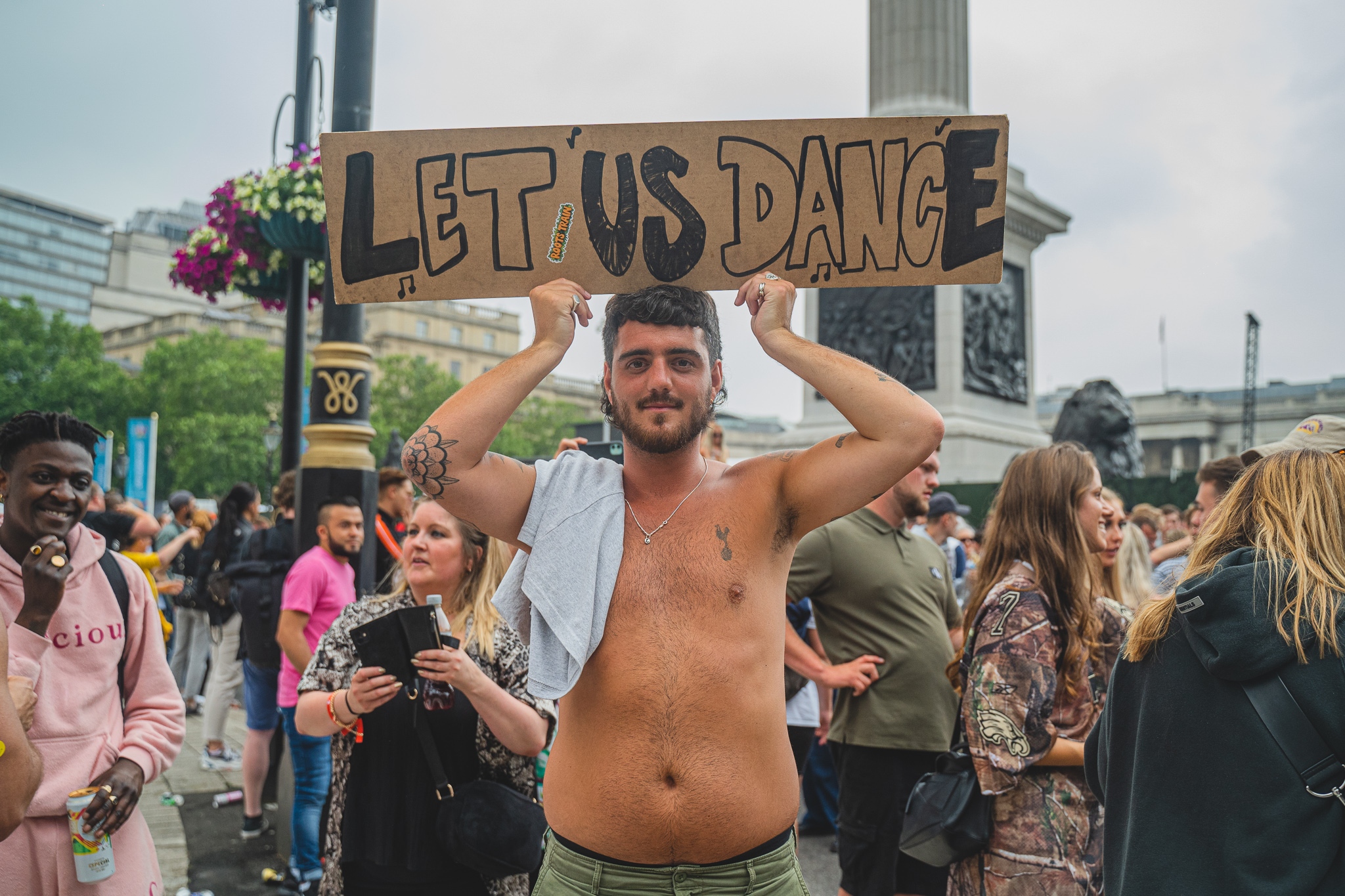 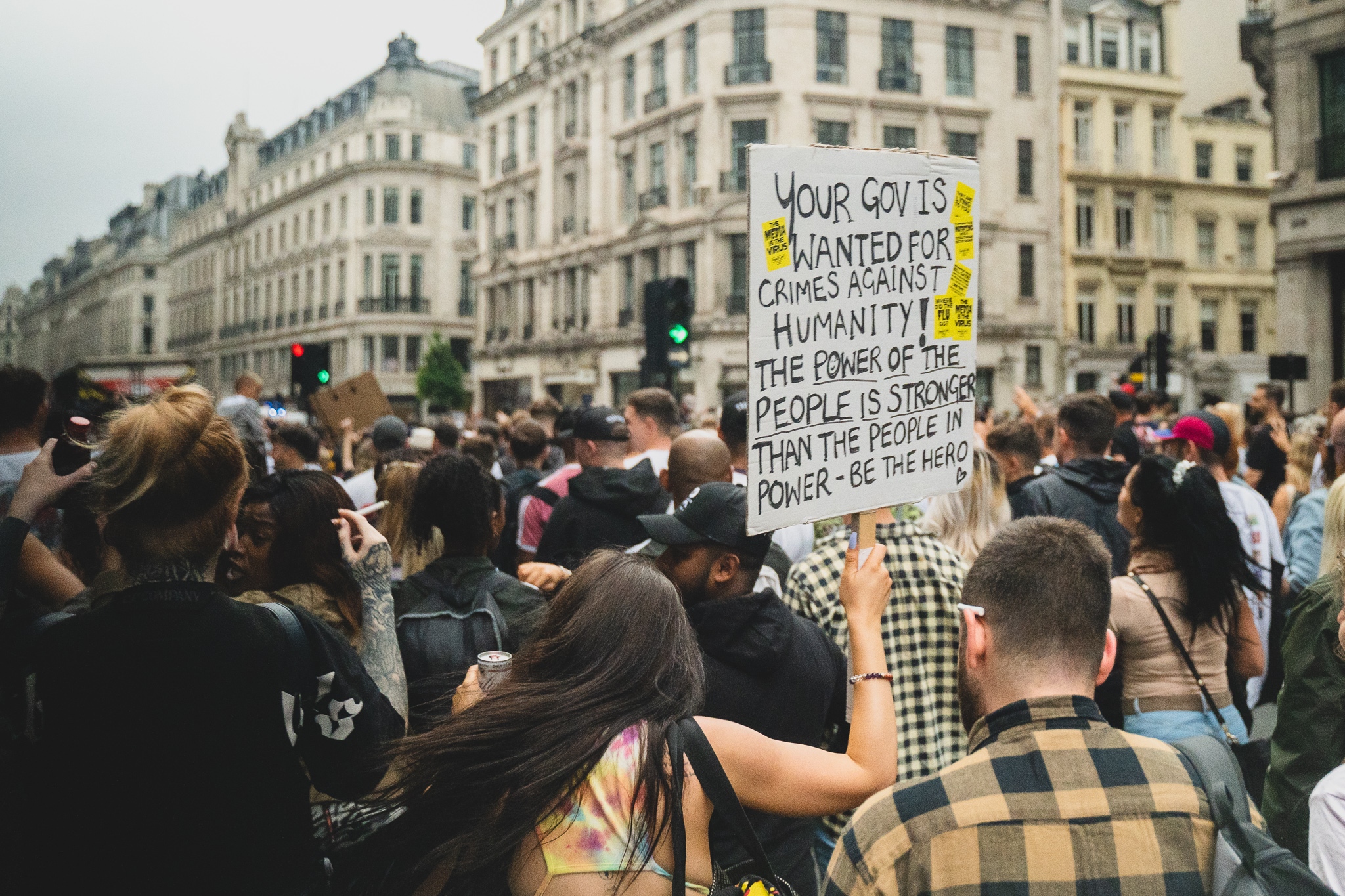 Earlier this week rumours that the lifting of COVID restrictions could be brought forward to July 5 were quickly laid to rest by new Health Secretary Savid Javid, who said exiting lockdown would be “irreversible” once confirmed. At the Freedom To Dance protest, a line-up featuring UK-based DJs including Alan Fitzpatrick, Charlie Tee and Fat Tony played at five mobile stages throughout the course of the day.

Over the past 15 months, the music and hospitality industries have been hit hard. A number of venues have permanently shut down across the UK as a result of the pandemic, and many more are teetering on the crippling edge of bankruptcy. The Government has failed to provide sufficient financial support, and with an additional four weeks recently added to the lockdown restrictions, an industry in crisis is demanding change with the looming extinction of nightlife hanging over the nation’s head. The Freedom To Dance march made plans to bring the industry together, but was ultimately disconnected in its aims. 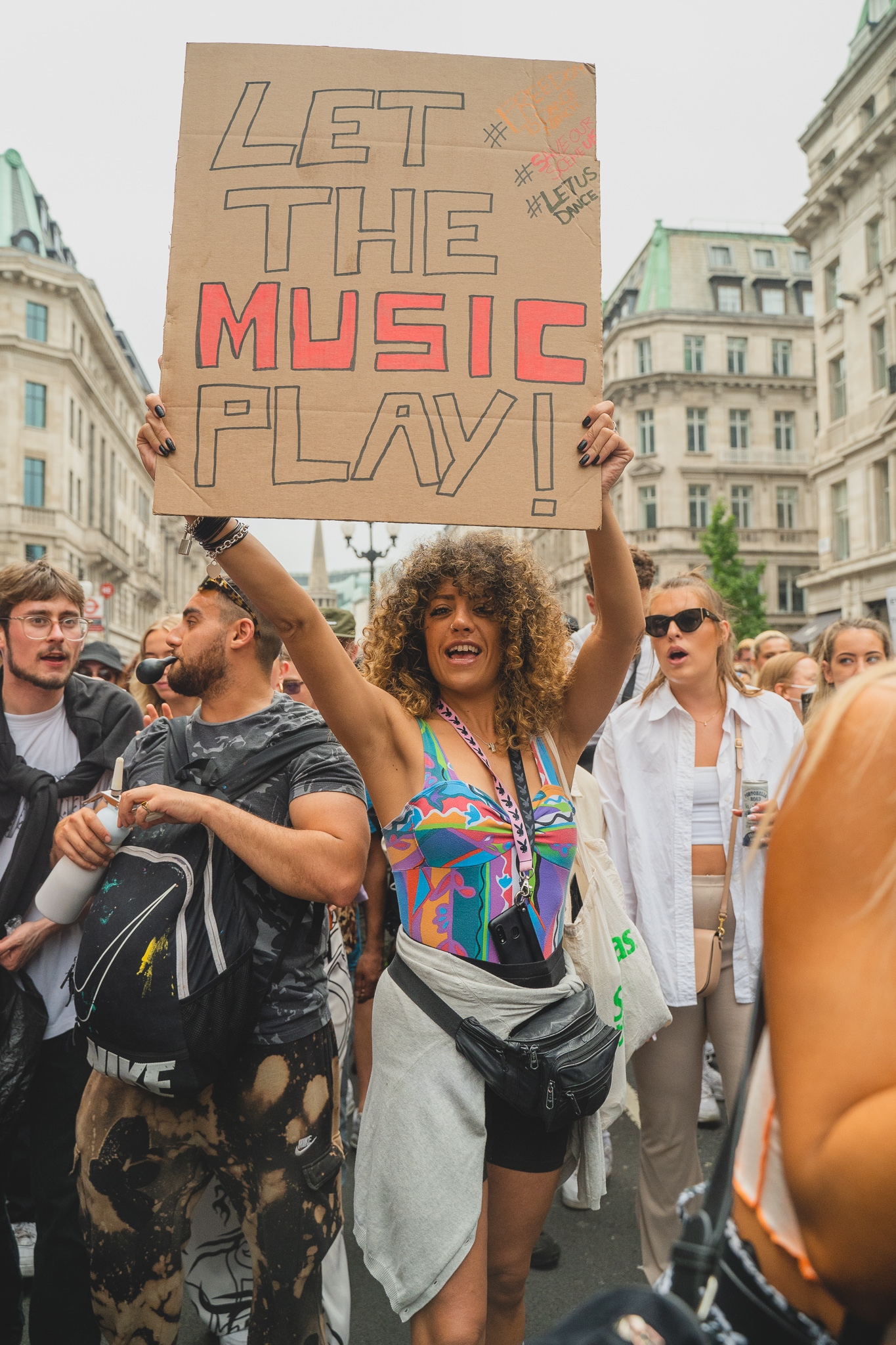 Through the herds of protestors, it seemed as though the overarching annoyance for most sprung from the football matches, races and events with mass crowds that are now allowed to go ahead under loose restrictions. “The Government pay millions into football, 30,000 people in an arena and all we want to do is dance. I’m here with my daughter, my niece, my little sister, and my neighbour. We all love to dance, that’s all we’re asking,” said Sharee who held up a sign colourfully reading ‘Fuck Boris’. Later, speaking to a government worker who was partaking in the protests in aid of friends losing work throughout the pandemic, Jimbo said: “I believe the freedom of the people has been stifled considering all of these events are allowed to happen - football, motor racing, horse racing. The music scene has been massively neglected by the Government, maybe unintentionally or intentionally.”

Read this next: Clubs and venues ask the Government: 'Why hugs and not clubs?'

The march sparked some controversy, even drawing criticism from people whose livelihood relies on nightlife reopening. “Do I agree with the massive rave protest happening in central? No. Do I think the nightlife industry should get £ support and solutions on how to safely/fairly operate as long as sports events / royal ascott etc are also allowed to happen? Yes” tweeted Rinse FM DJ Jyoty Singh. The Government has undoubtedly let down the nightlife industry during the pandemic which gives plenty of justification for protest. But the protest didn’t feel unified in its aims for an outcome, with demands made by those marching scattered and inconsistent. Questions such as why non-music mass events are allowed to go ahead and demands to make such as supporting the nightlife industry financially while it adheres to lockdown policy are pertinent points to raise and pressurise the government with. But some areas of the protest honing in singularly on the ‘Let Us Dance’ mantra and treating the march like a rave felt oblivious to these wider political contexts, and as a result, less likely to be taken seriously. 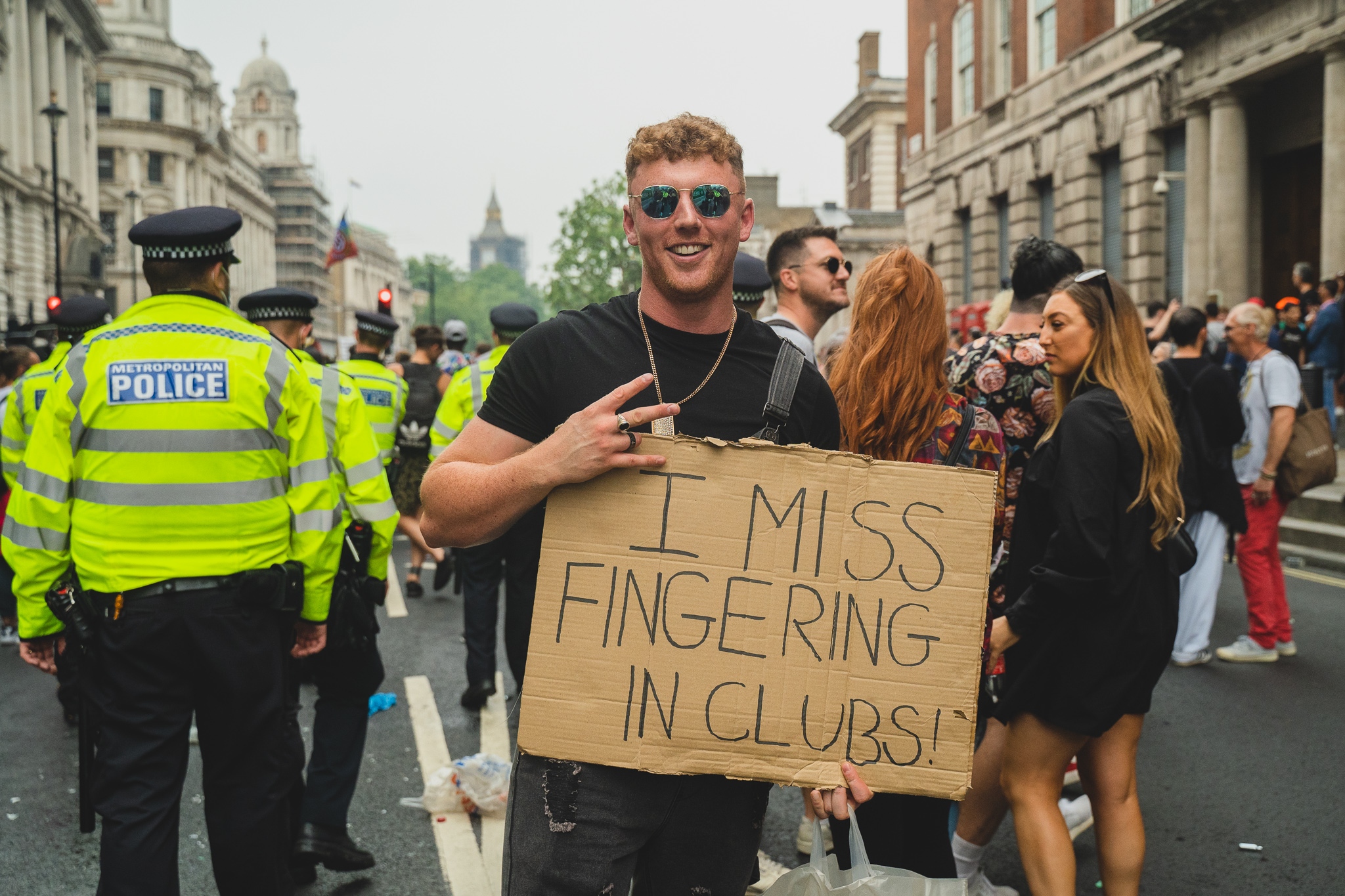 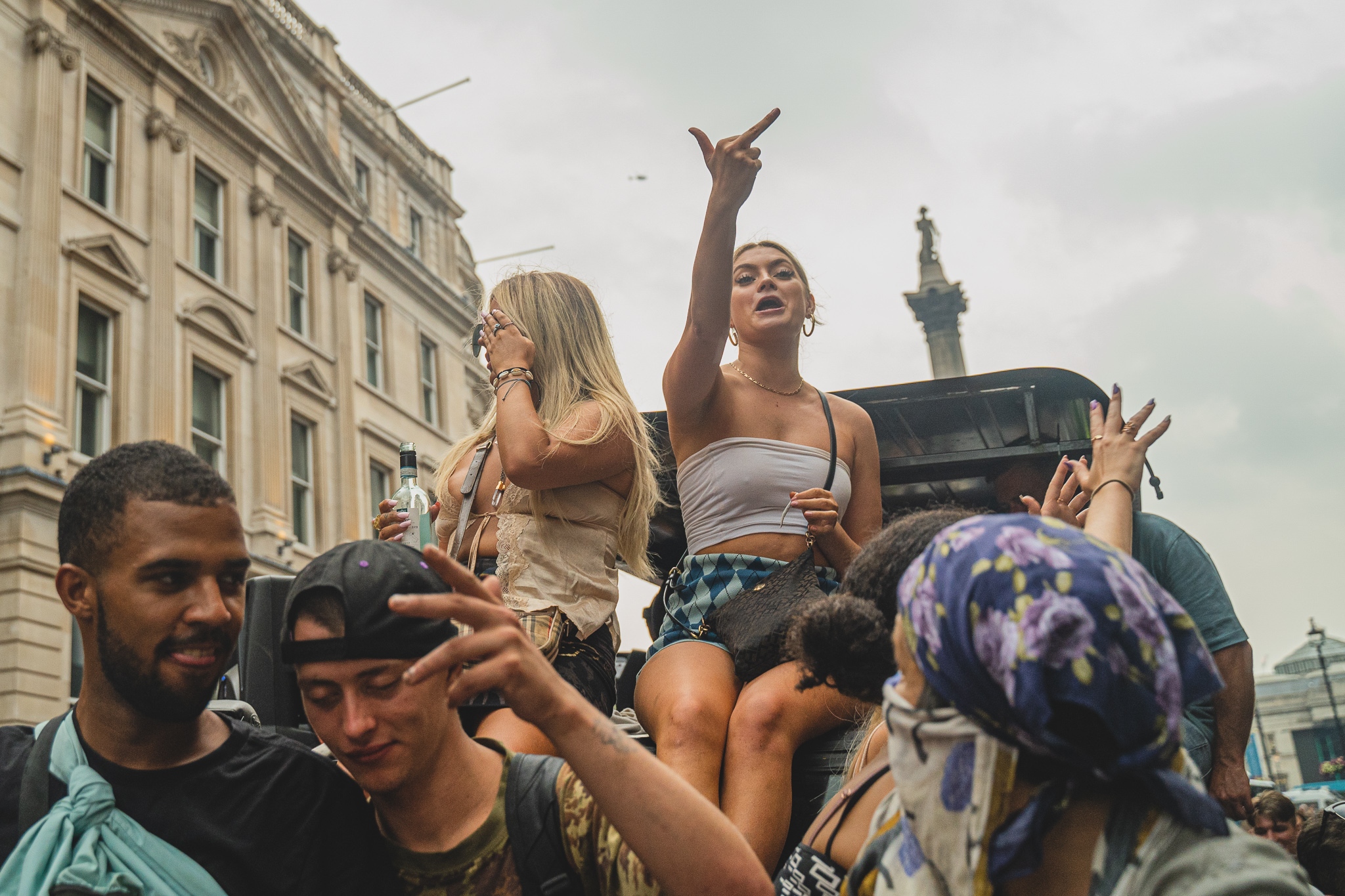 Speaking to one crowd member, he told us that despite standing with the cause, he “felt morally conflicted at the march” after the day’s events. “Protests are meant to make a change and get people to sympathise with your cause, but I’m worried that today did the opposite. For onlookers not involved in rave culture, seeing young people huff balloons, piss everywhere, and leave a trail of litter through the centre of London, I’m sure it just looked like a group of reprobates trying to have their own way,” he said. Tabloid headlines have predictably zeroed in on these facets of the protest, feeding into the negative perception of dance music in the mainstream eye.

There was also the question of whether the protest could do more harm than good in the long run with thousands of attendees congregating mask-free. Scottish football fans taking over London with their own rowdy party ahead of the Euros fixture at Wembley has since been linked to nearly 2,000 new COVID cases. With 80% of the adult population having received at least one dose of the vaccine and a predominantly younger crowd attending the march, few people were worried about the risks. “It’s obviously not ideal having that many people on the streets of London without a mask on, but we felt like this was necessary, this was something we had to do for our industry. It’s a warning shot to the government, we’re basically fighting for them to lift all restrictions as soon as possible,” said SOS organiser George Fleming. “If they push this back any further, we’re going to be on the streets every single week fighting for our sector.”

Read this next: COVID tests and vaccine passports will not be required at UK nightclubs when they reopen

Sprinkled through the crowds of ravers and music industry affiliates, the odd anti-mask, anti-vaccine sign reared its ugly head amidst the more affirmative placards, indicating the march was also hijacked by people with agendas beyond ‘Save Our Scene’. “I totally agree with non-compliance of masks. I’m a health professional so I know it’s not a proven method of PPE. I know it doesn’t work, I know it’s pointless. We’re here because we want to get back in the rave, we just like music,” said a couple holding an anti-mask sign. Their claims are not backed by science, with multiple studies carried about by experts showing masks to be effective at ‘significantly’ reducing transmission. 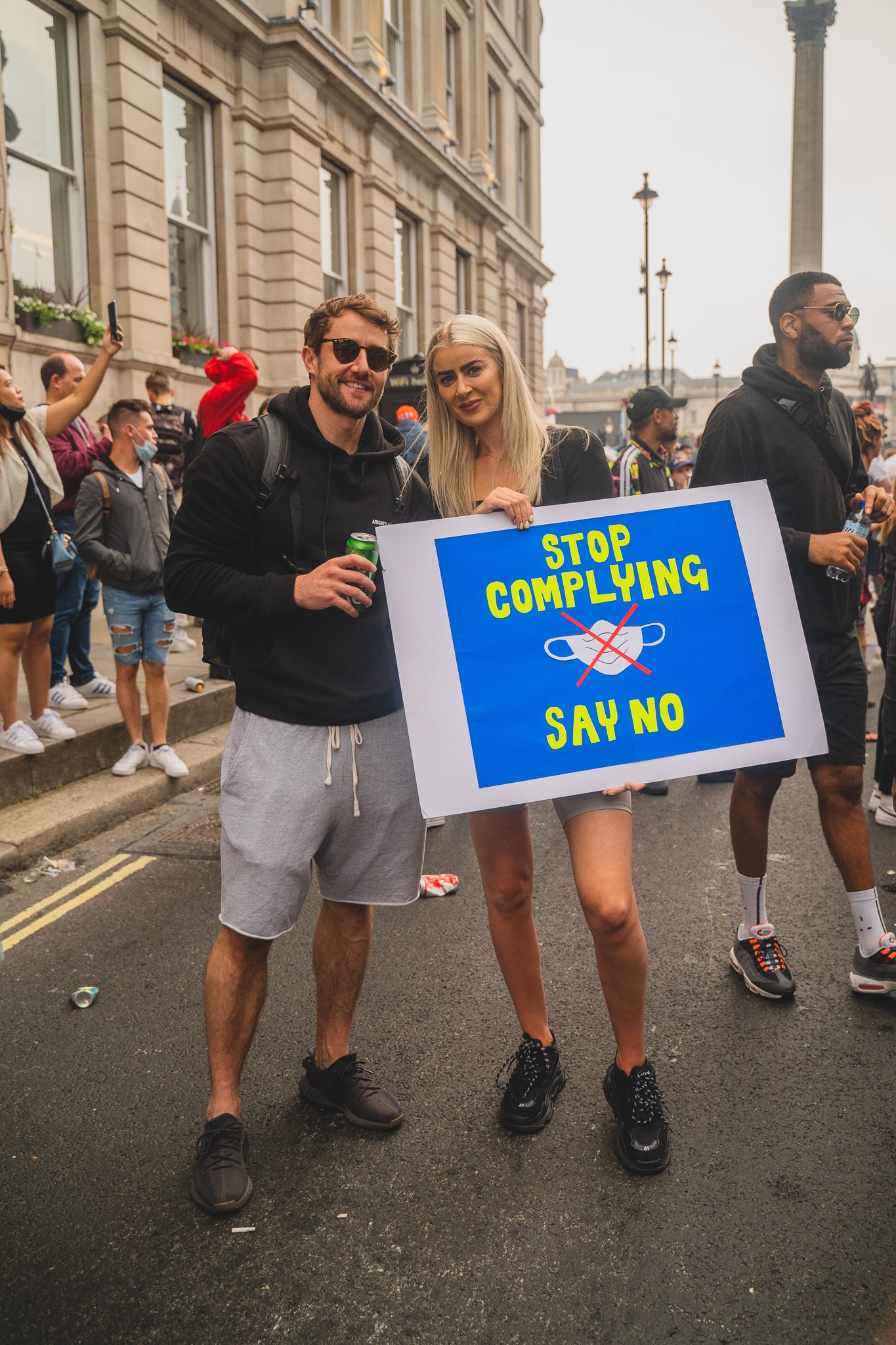 Controversially, some of the DJs who played over the course of the day have also recently been spotlighted after airing similar beliefs, including Hannah Wants who tweeted: “Ummmm I ain’t having no vaccine” at the beginning of the pandemic. Shortly after Sunday’s protest, she said: “Y’know another great thing about yesterday? No politics, just music”, which quickly received a wave of criticism, leading her to change the tweet to ‘no music industry politics’. Ahead of the protest, Save Our Scene tweeted that some DJs had been removed from the line-up in response to a comment about artists on the bill that have been playing ‘plague raves’ or expressed public anti-vaccine sentiment, but did not specify who.

Read this next: Meet the junior doctor who started a record label during lockdown

As the march moved away from its initial meeting point of Regent Street toward Parliament Square, ravers danced to music and enjoyed what felt like a return to normality. Catching Charlie Tee after her set on one of the five music stages, she told us: “I haven’t had any work in over a year, our sector has been so resilient and patient and resourceful, and we’ve adhered to all the government guidelines thus far. I’ve lost thousands, had nothing in Universal Credit at all, and I’ve not had a penny for all the money I’ve lost.” In a completely devastating time for the music industry, this seems like an unfortunately common theme. “The government have treated the nightlife industry disgracefully,” said Kromatic Records founder Jack. “They’ve really done nothing for us. Luckily, we’re just a new startup so we haven’t suffered too much, but we want to make a career out of this.” 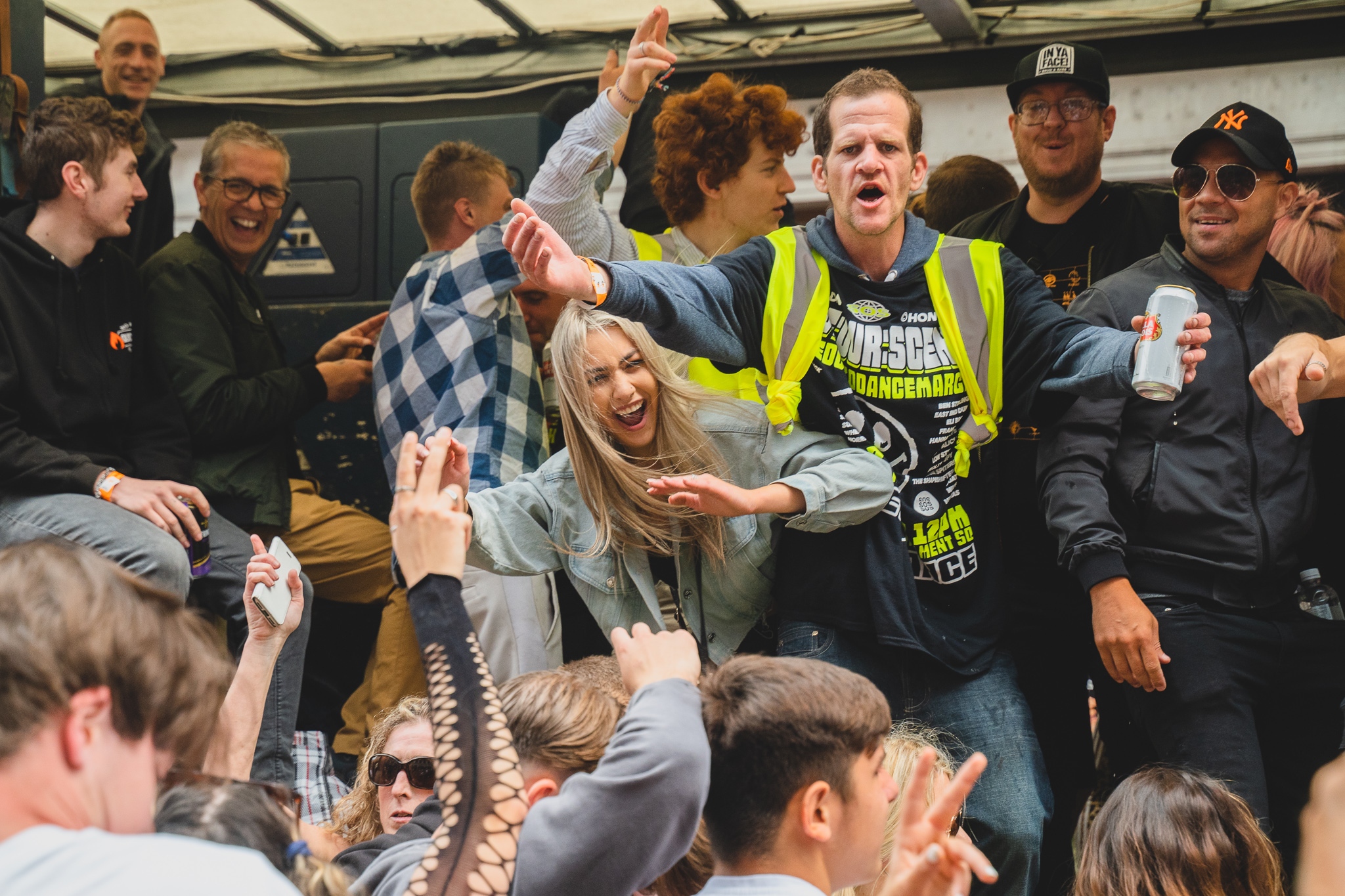 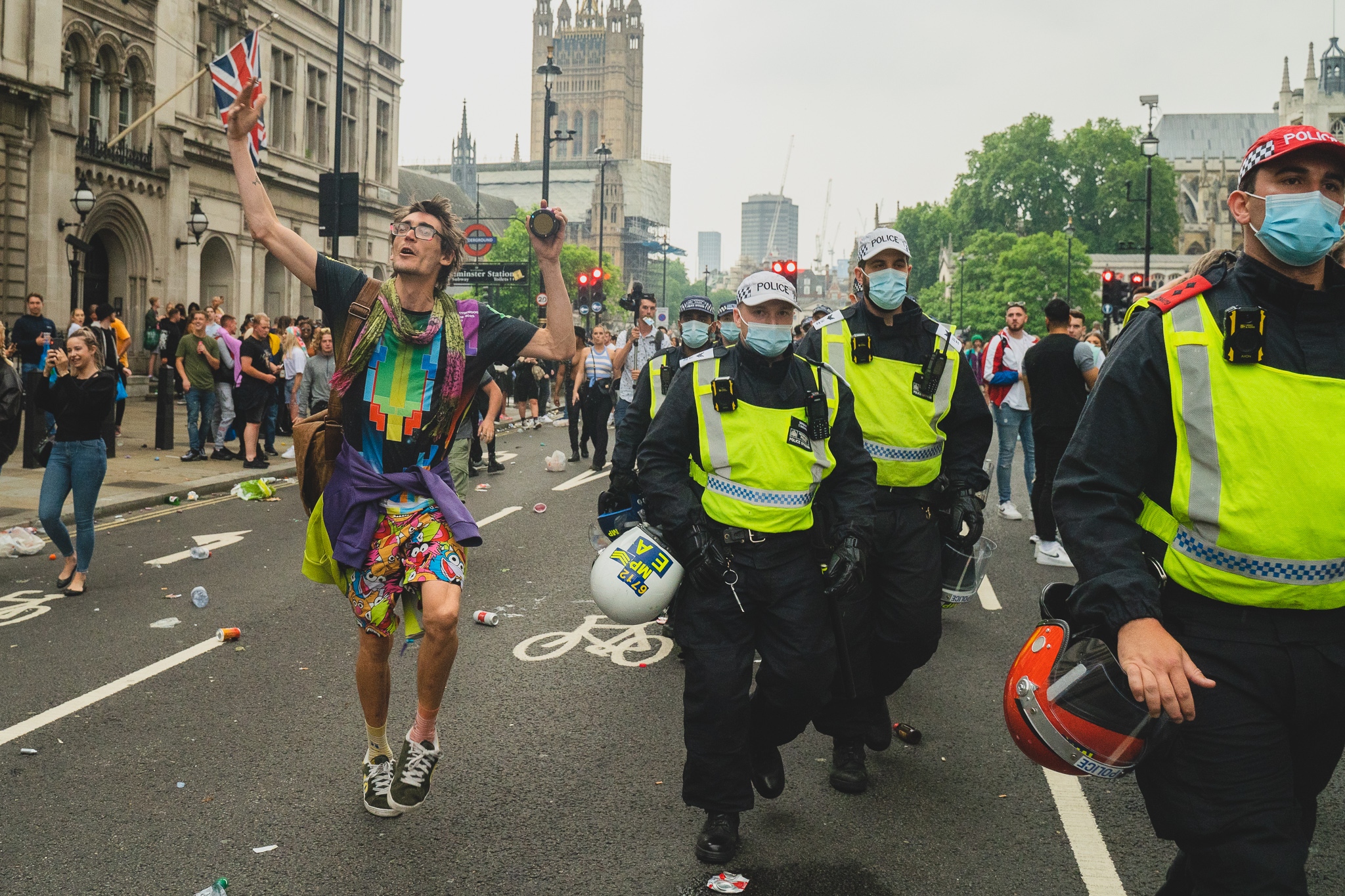 Come the last few sets of the evening, the police started to move in on the crowds. Initially guiding protesters through the streets, they were now being deployed in full force to disperse everyone away from the music. When the music trucks were stationary, it felt more like an illegal rave in the centre of London than a protest. The atmosphere shifted as protesters fled away from the incoming riot police.

Read this next: COVID tests and vaccine passports will not be required at UK nightclubs when they reopen

Although the march fed into a variety of ideologies, the determination of a music industry let down by politicians to call for change was wholeheartedly felt. “The industry has campaigned, lobbied and worked hard to engage with the government in support of the sector, but as of today it has been excluded, marginalised and all but forgotten,” Night Time Industries Association CEO Michael Kill told us after the protest. “So the message is clear, we need July 19 to be the terminus date,” he continued. With the night-time economy employing at least 8% of the UK’s workforce and bringing annual revenues of around £66 billion, the fate of thousands of jobs, venues, and ultimately lifelines of so many artists across the country lies in the hands of the government. Sunday’s protest certainly gave them a warning shot that the industry won’t stay down without a fight. The more unified and discerning that fight is, the better.