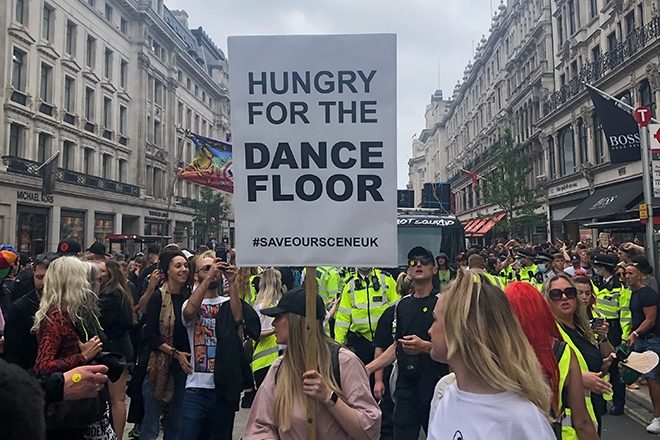 On Sunday, June 27, protesters gathered in London’s Regent Street to call for government action on the reopening of nightclubs and music venues.

Thousands joined the march with placards, parading through London accompanied by five music truck stages where DJs played throughout the day. The demonstration was born out of frustration for the government’s lack of support for the industry and the sustained shutdown of nightlife.

Read this next: Save Our Scene organises protests in London and Bristol

Earlier this month, the government announced a pushback to the final stage of restrictions lifting, which was initially supposed to go ahead on June 21. As a result, the events industry has been hard hit.

With a lack of financial support and many clubs already on a financial cliff edge prior to the pushback, around 75% of commercial spaces including nightclubs and venues now face bankruptcy.

The Freedom To Dance protest ran via the Save Our Scene campaign, which has previously held similar protests across the country. By the end of the evening, riot police moved in to move protesters away.

The march faced criticism from some people involved in the nightlife industry for reasons such as the lack of mask-wearing from attendees and a lack of a unified vision for the protest's aims.

Midland criticised members of the LGBTQI+ community who chose to attend the protest over the Trans Pride demonstration. "Save our scene (the shoot yourself in the foot 12 inch dub)" he tweeted this afternoon.

“We are demanding that the Government ends all restrictions on the hospitality sector without any further delay. Enough is enough and we can’t stay silent anymore. Music lovers, we need your help. Please come and support the industry which makes life worth living and help #saveourscene.”

DJs who joined the march included Alan Fitzpatrick, Charlie Tee, Funk Butcher, Fat Tony and Ben Sterling. Throughout the day, crowd members chanted 'freedom', while ringleaders who took over the stages shouted 'save our scene, save our future'.

With a recent spike in COVID cases, the government plan to keep restrictions in place until July 19. Speculation that this could be moved to July 5 is now circulating, with new health secretary Said Javid due to address the Commons today.

Keep your eyes on Mixmag.net for an incoming full report on the Save Our Scene protest.