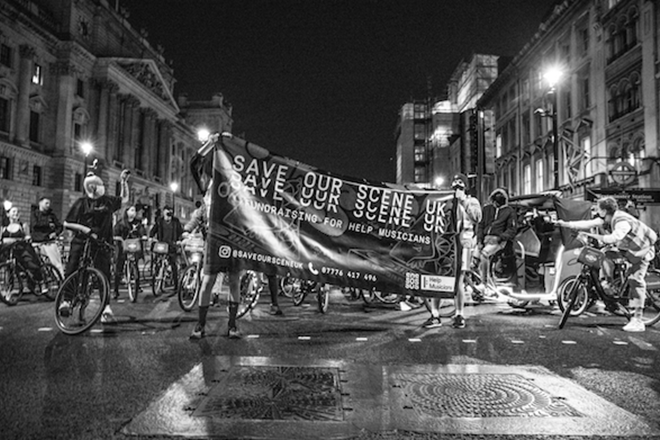 Save Our Scene is protesting the lack of support given to musicians from the UK government, with two demonstrations set to take place in London and Bristol this week.

The first bike ride protest will take place in the English capital on December 2, starting under Marble Arch at 7pm and riding to Parliament Square. The Bristol protest takes place the following day, setting off from Clifton Downs at 7pm and riding to St Andrew’s Park.

They follow on from the October protest in London, which saw DJ Josh Parkinson playing music on a rickshaw as cyclists rode through the city’s streets to the Houses of Parliament.

This time a Land Rover equipped with a DJ booth will lead the ride, with Josh Parkinson playing b2b with Jess Bays. In Bristol, GotSome will play b2b with Pablo Bravas.

Save Our Scene founder George Fleming said: “As instructed by the Government, the music industry is getting on their bike. Our aim is to bring music lovers and professionals together and show the Government how important it is to protect the arts. We will be protesting until we see change, we cannot stop and must stand strong for what we believe in.

“The first protest in London was so successful back in October and we’re confident that it’s only going to get bigger. I’m excited to take the campaign to Bristol. The city is one of the most musically eclectic in the country. If you love music and have not been to Bristol before, now is your chance!”

Save Our Scene co-founder and DJ Josh Parkinson said: “The industry has never needed our support more than now. The majority of musicians rely on events to make a living and right now we’re not making a living. I’m urging everyone to get behind this campaign, we need your support.”

Save Our Scene is partnered with Help Musicians, and has raised more than £3,900 for the UK charity to date.

Further protests in Leeds, Manchester and Edinburgh are being planned.