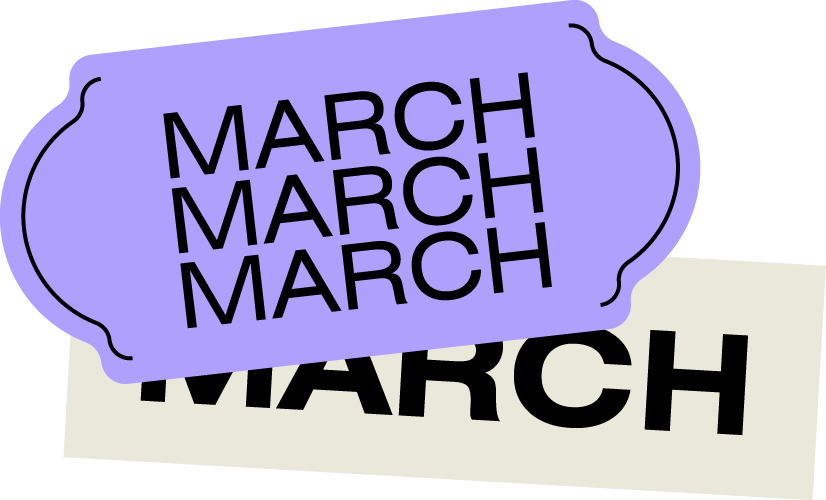 The kind of pairing dreams are made of - 700 Bliss, comprising DJ Haram and Moor Mother, set hearts aflutter with news of their debut album due for release on Hyperdub in May. As a sneak preview, the pair dropped forward-thinking, moody bass track ‘Totally Spies’ — a sweeping composition of delicate percussion, deep basslines and ethereal synths. Prayer-like vocals from Lawfawndah dance elegantly above the dark drums, ensuring the track never dips too far below the surface.

That three days of something-like sunshine really gave our weary souls a little boost — and this remix from Lumberjacks in Hell boss Marcel Vogel of Panna Cotta’s ‘Sunrise’ really encapsulates those moments of hazy, early spring light. A luscious house track meandering between blissed out pop, fluttering chords and deep, warm drums has set our imaginations wandering. The sunsets are calling.

Toeing the line between shimmering, lofty house and downright naughty, grinding breaks — ‘Bmore Baby’, the first single from Closet Yi’s Curving Track debut, presses all the right buttons. It fluctuates from squirmy, childlike chimes and squelches to deep basslines and haunting synths. Perfect for peak time deviations into the unknown.

There is surely no better tribute to a track’s overall success than being transformed into an absolutely naughty donk track. Enter ‘So U Kno’ from Jeez Louise alias — an energetic, frantic, wholly ridiculous rendition of 2021’s unofficial Sound Of The Summer. It’s everything that makes a donk track so devilishly addictive… that grinding build-up, an undercurrent of slick wooden agogo and some good old fashioned comic timing — all combined to get you throwing gun fingers in the air so rapidly, with such vigor, that you could be at risk of a hand injury, so press play with caution.

This month, experimental wizard Mike Paradinas - otherwise known as µ-Ziq - celebrates the 25th anniversary of ‘Lunatic Harness’ with a masterful rendition of the tracks that inspired him to remaster the seminal record. Opening cut ‘Goodbye’ lands on the latest EP of the same name, showcasing a take on old skool jungle tekno in a nostalgic, pent-up Paradinas-style. In the first of several projects due for release this year in celebration of the 1997-released record, standout track ‘Goodbye’ grinds rapid-fire IDM back down to its bones.

Fast-moving, rave-leaning ‘Metaphysical’ is the latest cut from Mall Grab, a producer as malleable as he is assured in the styles he delves into. Featuring rolling drums and the classic amen break, the latest single is harder than your typical MG hit. Dropping via his own imprint Looking For Trouble, ‘Metaphysical’ carries the weight of London’s dark and dingy setting in a love letter to his adopted home.

With a pulsating intro and rolling synths throughout, Overmono’s latest number dropped into the hands of a much-delighted fanbase this month alongside the announcement of a forthcoming five-tracker, ‘Cash Romantic’. The repetitive loop of ‘Gunk’ uses pitched-up, garage-style vocal chops to create a catchy hook, marking out a surefire on-repeat record this summer.

Taking Hiatus Kaiyote’s career-launching track ‘Red Room’ and stripping it back to its most simplistic elements, Nick Hakim lands on Brainfeeder with a remix that’s sure to blow you away. The US-based musician - typically known for softer, vocal-led tracks - creates a psychedelic world within ‘Red Room’ and infuses the record with more instrumentals and precise guitar riffs.

Charli XCX’s latest album ‘Crash’ is packed full of ‘90s and ‘00s dance influence, with some heavy nods to bangers of those eras. ‘Used To Know Me’ is a standout from the LP, building upon a sample of Robin S’ house classic ‘Show Me Love’ and taking it to pop anthem territory.

Monotronique hails from Kharkiv in north-eastern Ukraine, a beautiful city known for its wealth of museums, theatres and cathedrals that is currently being bombed destructively by Russian forces. ‘No Other Place Like Home’ is the title-track to his new EP on Livity Sound, which the label is donating its share of proceeds to DEC Ukraine Humanitarian Appeal. It’s a contemplative and emotionally resonant tune, led by gently melancholic melodies.

Seth Troxler and the artist he’s declared as “the next wonder kid … an anomaly, like in a Marvel movie” Jaden Thompson join forces on a wigged-out track that will no doubt send headspaces spiralling on the dancefloor. Underpinned by a rolling pulse, the textures above lean into chaos, with spooky vocals and disorientating synth flourishes.

It’s not all about the BPM in this release from Logic1000 but more the textures and tones that make you want to move. Breakbeats dancing throughout a mixture of interchangeable build ups and downs lead the way, along with snippets of vocals and a bass-packed interlude that keep this piece exciting. It’s a tasty tune, a rush of excitement.

A song filled to the brim with contributions, you know it’s been crafted with care. The original has more of a positive, light and airy feel however the almighty Palms Trax has really added his flair. Starting with the soft vocals of Little Dragon’s Yukimi Nagano, we can already hear a deep beat has been added. An electronic bassline provides the track with the added element of a funky melody. Samba-like percussion and ominous synths take it away towards the end of the remix. Palms Trax has really let the best parts of the original shine through as well as incorporating his own twist.

You’d think DJ Seinfeld’s ‘Someday’ couldn’t get any better, but salute has taken it up a notch. From start to finish this remix is coated with that club sound. Altering every part of the original you can only just make out it’s ‘Someday’. It feels like there is so much going on that the track can’t take a breath. The recognisable keyboard sound has been morphed into beats with the vocals modified to higher pitch and speed. All in all, salute has worked magic on this already cracking track and it will definitely be listened to on loop.

Floating Points did not disappoint with his first release in a year. Spanning more than 7 minutes of choppy, glitchy, drums, synths and vocal samples, it’s a heavy banger of a track. Flickering in and out of all instrumental elements, it’s giving the feel of a classic dance track that steps away from Floating Points’ recent orchestral stylings and back to his clubbier roots.

Starring a shuffling percussive line reminiscent of early UKG, wobbly melodies and a perfect beatdrop - Joy O continues to deliver. The recent Mixmag cover star feels he’s been reaching his true capacity as a producer of late, and this track sees him at the top of his game, melding old skool drum ‘n’ bass influence into fresh and exciting territory.

Synthy, funky, and melodic - this track asserts yunè pinku status as one to watch out for. She combines explosive vibes with sorrowful, contemplative poetry and mesmerising melodies, drawing on genres ranging from ‘90s acid house to UKG. Ready to listen to through your headphones or through a soundsystem - it’s laced with dreamy melodies and a catchy drumbeat. When paired together, this combination is euphoric, and just as the euphoria hits the beat drops and listeners are blessed with a funky bassline.

Raunchy and club-ready: Guilia Tess has done it again. ‘Fru Fru (Edit)’ has a dark yet quirky synth line over an unsettling foundation that waxes and dwindles in response to the track's vigour as a strong kick emerges with each drop. This is one to lose yourself on the dancefloor to, and will be played on the turntables by many. Part of her ‘I Feel You’ release with HE.SHE.THEY, the producer shows that she is a name that is making waves.

As part of the Hospital:Lens Mixtape series, this track from Rohaan and Ava Grace is bouncy, bass-heavy, full of crawling moments and a beat drop that can get a crowd rowdy. This track is perfect for summertime and will be a festival favourite for DJs across the drum ‘n’ bass sphere, combining rolling jungle style drums with more melodic and liquid-style vocals.