It’s just gone 4pm on a scorching Sunday afternoon in Barcelona. On the open-air Carpa stage, Milo Spykers is testing the speakers with thunderous techno stompers. Down below on the dancefloor, one hand on the barrier, is Belgian phenomenon Amelie Lens. Dressed in black and punching her right fist in the air, she’s not afraid to get stuck in amongst the rave and interact with her legion of dedicated fans. Happily posing for photos, recording Instagram videos and signing records, the DJ, producer and Lenske label boss takes the time to chat with everyone; Mixmag watches as one grinning Catalonian girl kisses each of her idol’s hands before two muscular British lads pray in front of their techno queen. “It’s so sick of you to come down and party with us,” gushes one ecstatic Geordie girl. “It’s my party!” Amelie replies, smiling like a kid at Christmas.

One of a dozen official OFFSónar parties for 2019 – varying from tech-house paradise CircoLoco to Bonobo’s eclectic Outlier and carefree hippie retreat WooMooN – Exhale is without doubt the hardest, musically, across the four days. By 7pm the stage is packed as France’s Airod, (under strict instruction not to play a ‘sunshine’ set) delivers an assault on the senses, resulting in hundreds of faces screwing up to ROBPM’s ‘Double Slap’ as friends fan each other under the black netted canopy. It might be ridiculously sweaty in the 30 degree heat but the glitter-covered guy up-front doesn’t seem to care, continuing to bounce as if on springs. By the time of Amelie’s headline set there are girls on shoulders waving a handmade ‘We Love You’ banner as pink strobes brighten up the massive audience. No other party comes close, and it’s hard to believe that from 5–7am this morning she played the closing set at Sónar itself.

Getting to close Sónar festival and hosting her own stage at OFFSónar are dreams come true for Amelie, who is no stranger to Barcelona’s biggest party week. “I’ve been coming to Sónar since I was 16,” she says, recalling a life-changing moment a year later, watching Maya Jane Coles play. “That was when I said to myself, ‘I really want this!’ I was collecting music, but when I saw her play, that’s when I made up my mind.” Amelie found herself transfixed by what Maya’s hands were doing: “I was a music lover but I’d never really mixed so I was very intrigued.”

In the 12 years since, Amelie has returned to Sónar year after year. “I’m honoured that so many people have come to Exhale,” she says minutes before stepping up to the decks, looking out on the crowd of Spanish girls in Dr Martens, black leather shorts and fishnet vests, and European guys proudly wearing hand-made ‘Lenske’ and ‘Exhale’ T-shirts. “I cannot believe it, especially as there are so many other parties also happening,” she continues, the sound of Carl Cox’s closing party getting started just minutes away. 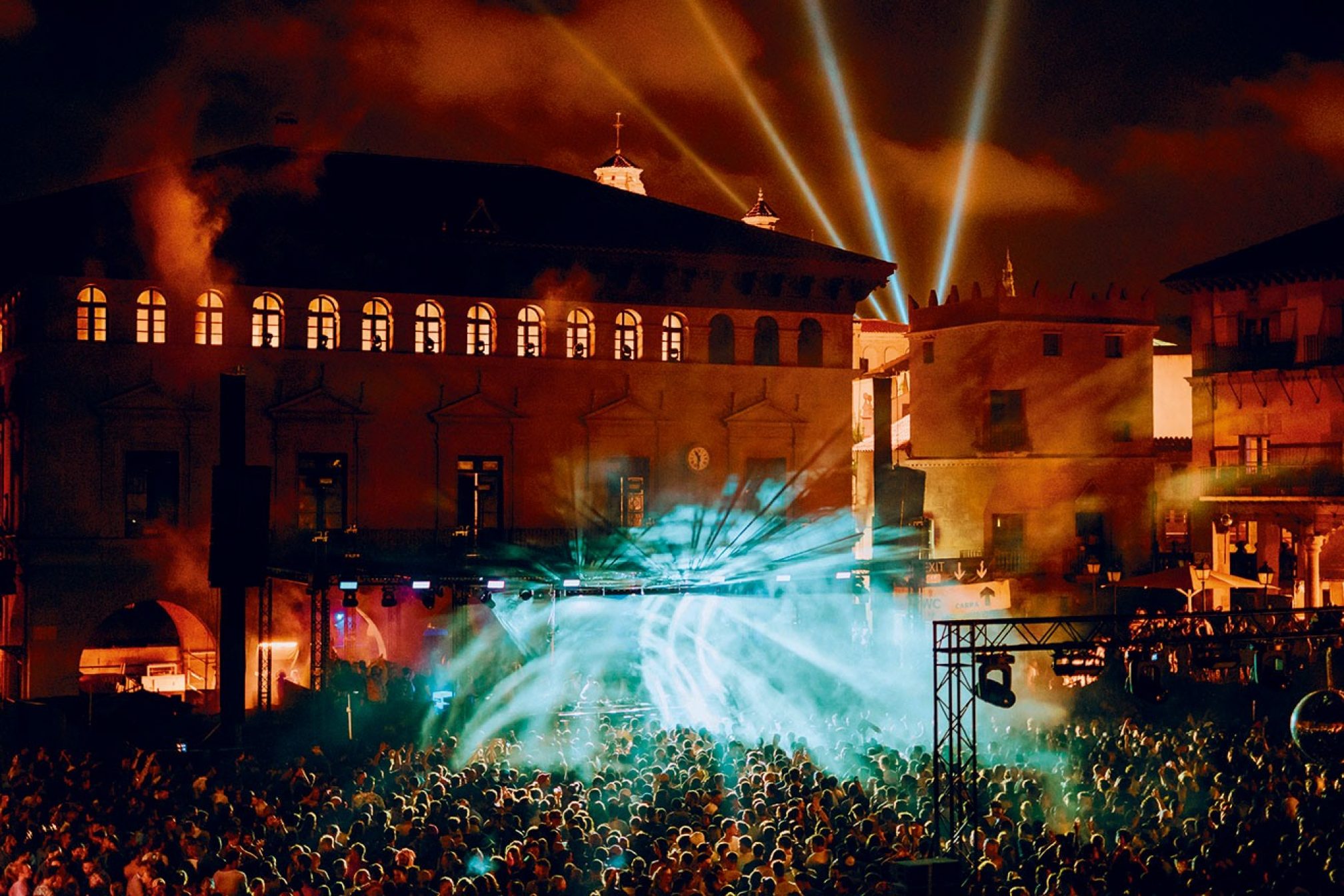 OFFSónar is just one side of Sónar. What started as an electronic meeting two years after the 1992 Olympics in Barcelona has grown into a festival, technology conference and, more recently, a series of parties spread over the city. “We knew it was a futuristic idea to find the connection between music and computers,” says Sónar’s Head of Communications Georgia Taglietti. “We wanted to create a discussion about electronic music culture, and the name ‘Sónar’ was decided because we wanted to ‘scope out future sounds’. Now, it’s a week when Barcelona becomes the capital of electronic music.”

At first, Georgia and the team found themselves fighting to distance their brand from the myriad of unofficial parties that would spring up around the festival, mainly because “opportunists were just using the brand. I think people were very confused – what is Sónar and what is ‘off’ Sónar? I took a lot of time personally to make people understand that they couldn’t use our brand just for the sake of it... but now, because the team behind the OFFSónar parties have come up with something that benefits us all, we’re a very friendly neighbourhood.”

What sets the two apart the most is that Sónar, the main festival, “does something more than entertain”. If Sónar aims to push the boundaries of music and technology to new levels – whether that’s Lotic’s transcendent, otherworldly performance, the futuristic sounds of gqom king DJ Lag or Murlo’s hypnotic audiovisual journey – then OFFSónar delivers a more straight-forward clubbing experience, albeit in a unique location. Making use of several of the 117 buildings in Poble Espanyol (‘Spanish Town’), an open-air architectural museum built for the 1929 Barcelona International Exposition that is laid out like a little town, there’s a sense that we’re raving in a truly surreal location, especially considering the number of children and grandparents that we see milling around the various areas, completely unaware of the hedonism that’s unfolding on the other side of the door. 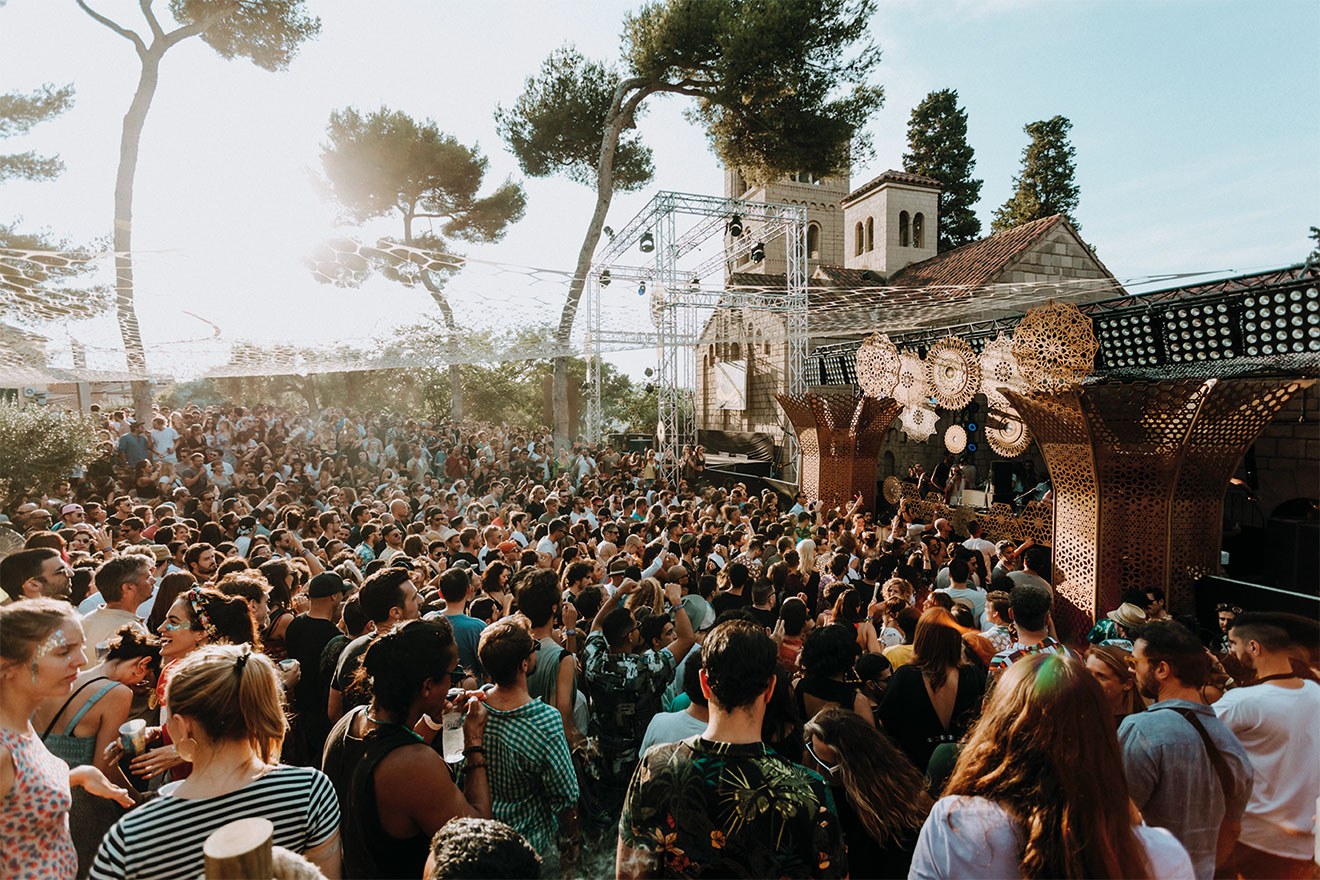 Read this next: The Cover Mix: Amelie Lens

OFFSónar parties are, according to OFFSónar’s Head of Communications Robert Sopenlehto, “some of the most important of the year – not just in Europe but around the world. We create intimate clubbing experiences; dancefloor-orientated parties that cover the whole spectrum of electronic music [everyone from Virgil Abloh and Moodymann to Volvox and Damian Lazarus has played]. We give local people the chance to see some of the world’s leading labels and parties in Barcelona. And for people outside the city, it creates a destination where they can come to one place and choose their own adventure; instead of just one idea, it’s a series of different experiences just minutes away from each other.”

Although it’s been 20 years since the first party, OFFSónar only became official in 2018: “Because Sónar was so successful as a festival, it spawned this huge microcosm around it that, for years, the organisers didn’t want to acknowledge or have anything to do with,” Robert explains. All that has changed now and, as Robert says, “it’s interesting that a brand as old as Sónar, 26 years in, is still looking to the future.” Both teams, now working together, have at least one shared goal: to continue to grow Barcelona’s electronic music culture. “There’s not a decided vision of where this ends yet, but it’s something that we discover along the way.”

Ultimately, though, the club politics are secondary to the dancefloor experience, and as a beaming Amelie takes control to put the cap on a day and night of fierce, uncompromising techno, the courtyard more surreal than ever with the old buildings lit up against the velvet of the night sky, this city’s status as an electronic superpower is clear.