“No income, no place to live. Literally overnight, I was homeless,” Lotic confesses. “I didn’t want to work on [my album] when I was trying to find a place to live, or trying to eat, or anything. I ended up drinking so much during that period, I probably shouldn’t have been writing music anyway.

“I was so out of it. I had to set it aside and only work on it when I was really, really ready to,” continues the self-described “ferocious femme” who goes by the pronouns ‘they’ and ‘them’. Lotic (aka J’Kerian Morgan; ‘lotic’ means ‘living in water’) had already quit touring to focus on making the album, setting aside time between January and April 2017 to record. But when they were kicked out of their Berlin apartment in January of that year, it threw the process up into the air. Vowing only to approach it with a positive mind-set, Lotic worked on the record sporadically, in fleeting moments of positivity that seemed to come around once every few months.

Given that it came from a period of such turmoil, the album that has emerged is a real triumph. Living up to its title ‘Power’, it sees Lotic draw from the acerbic and angular sound palette familiar from previous releases, but in bringing their own voice to the mix for the first time, Lotic has produced a sparkling and fundamentally hopeful debut.

This resilience runs through the producer’s entire life and career. At 29, Lotic is an integral producer and DJ in the underground scene. In 2012, when Berlin’s nightlife was almost solely concerned with house and techno, they pioneered a new generation of transgressive club music that’s migrated from its repurposed sex club roots to the caverns of Berghain and beyond. Lotic is a resident of the famed Janus Collective, alongside fellow DJs M.E.S.H. and KABLAM. Together, they helped forge a sound full of emotional intensity and taut with social and political consciousness. Lotic recontextualised the vogue ball anthem ‘The Ha Dance’ on 2015 EP ‘Hetercoetera’ in a tribute to LGBTQ culture, and led a sonic protest against straight white male audiences in their last EP, ‘Agitations’.

As angular as the nail shape they’re currently sporting, Lotic’s sound is a fever dream of caustic atmospheres, spikes of pitched-down r’n’b samples and slinking rhythms. They’re seemingly obsessed with the ways in which pop anthems can become gutted and modulated into steely dissonance – case in point being ‘Faded (How the Hell…?)’ on 2014’s ‘Damsel In Distress’ mixtape and last year’s ‘Formation’ (Election Anxiety/America Is Over edit) where Beyoncé’s vocals seem to ricochet around within a metallic container. And Lotic’s subversions have even made Björk take notice. ‘Hetercetera’, on Robin Carolan’s Tri Angle Records, led to two remixes for the ‘Vulnicura’ track ‘NotGet’ and an opening set at the Icelandic star’s 2015 Berlin concert.

“Lotic is one of the fiercest performer DJs I have ever heard,” she told Mixmag. “I’m so thrilled they’re coming out to sing on this [album].”

We’re at a nail studio on an uncharacteristically humid Tuesday in Berlin’s Neukölln neighborhood. Rainbow-hued nail polishes with tongue-in-cheek names like ‘Danke-Shiny Red’, ‘A Good Man-darin Is Hard to Find’, and ‘Mint Convertible’ crowd the wooden shelves. An electric file buzzes over each stiletto-tipped fingernail as Lotic tells Mixmag about ‘Power’, a work that almost failed to materialise.

“Last year was the first time I haven’t been sure of who I was. I always knew, for instance, that I was a musician, and that I was attracted to men,” begins J’Kerian, today clad in a relatively dressed-down combo of a calf-grazing grey tunic and Timberland heels. “I’ve always known most of these things, but last year it was like, do you really know who you are?” They let out a sardonic laugh: “I was like, ‘No, maybe you’re right, let’s have a look’.”

‘Power’, a mirror of J’Kerian’s own coming of age, is an expression of generosity, rigour and self-acceptance. It combines all of J’Kerian’s musical selves, including the ones before Berlin, before the inception of the Lotic project, all the way back to age 12 when they chose their first instrument. Born in the suburbs of south-west Houston, Texas, J’Kerian was raised in a strong black community. “Growing up, my running joke was that I never met a white person until I was in high school,” they laugh, shaved head accentuating brown, saucer-like eyes. Throughout their teenage years, J’Kerian mastered the technicalities of the alto saxophone, performing in the high school marching band, and eventually competed in the prestigious University Interscholastic League while at the University of Texas at Austin.

At uni, J’Kerian studied film and music theory in hopes of becoming a cinematic composer, traces of which can still be heard in the symphonic passages of their newest record. The electronic dissonance in ‘Power’ stems from a background in electroacoustic music and music programming. “[You] go out with a field recorder and record a bunch of rocks or you bang on glass – you take real world sounds and make a piece of music out of them through various forms of processing. Shortening sounds and stretching them out, reverb, and pitching them up and down,” they explain. “Basically, what I’m doing now, but with kick drums.”

The Lotic project began at 91.7KVRX, the university’s student-run freeform radio station boasting the slogan ‘None of the hits, all of the time’. Lotic still remains sour from those first experiences playing out their love of r’n’b, MIA, and experimental electronic music at a radio fundraiser.“They were so rude to us when I was trying to start out. That’s when I realised, OK, white people really do not want to hear black music.” Lotic recalls. “The beats and the elements that black music had were not popular in Austin at all. It was hard for me to accept, because I was just coming from a place where I was trying to share.” At odds with a stagnant environment and facing the tail-end of America’s economic recession upon graduation, Lotic resolved to marry their then-boyfriend and move to Berlin, where they had landed a job working for Ableton.

Back in the nail bar, six silver studs and a black gem starburst are carefully arranged with tweezers on Lotic’s glossy fingernails. They admire the handiwork with a “gorgeous”, cuting the exclamation into three syllables, opening up the second vowel and ending with a hiss, sounding more like “Gorg-AH-ssss”.

“From a very young age,” they recall, “My mom would say, ‘J’ – she called me J – ‘I just feel like you’re going to end up in Europe’, and I never understood what she meant by that. She’d say it all the time.”

But as J’Kerian puts it, “America didn’t give a fuck about me.” Unable to speak German and knowing no-one in the city, at first it would seem that Berlin didn’t give a fuck, either. But at the very least, it was a new horizon beyond the fast food chains and strip malls of suburban America. Six months after their move in June of 2012, J’Kerian met Janus founders Dan DeNorch and Michael Ladner, and their DJ resident James Whipple (M.E.S.H) at the now-shuttered artists’ bar Times. This supportive cohort – including Kajsa Blom (KABLAM) – unshackled Lotic’s hybridized sonic exploration. Janus’s histrionic character and laissez-faire attitude towards genres served as a crucible of self-invention, co-soundtracked by a string of imported DJs including Venus X, Total Freedom and Rabit, among others – all housed inside Berlin’s sweat-drenched venues. For this outsider, Janus became a
chosen community.

Those early days demonstrate how self-discovery and self-destruction can often move in vicious tandem. Honing their artistry in the foreground, behind the curtain Lotic nursed wounds from a disintegrated marriage, and fell out of two rocky, back-to-back relationships. The word ‘help’ hadn’t entered their emotional vocabulary yet, so escapism became the answer. 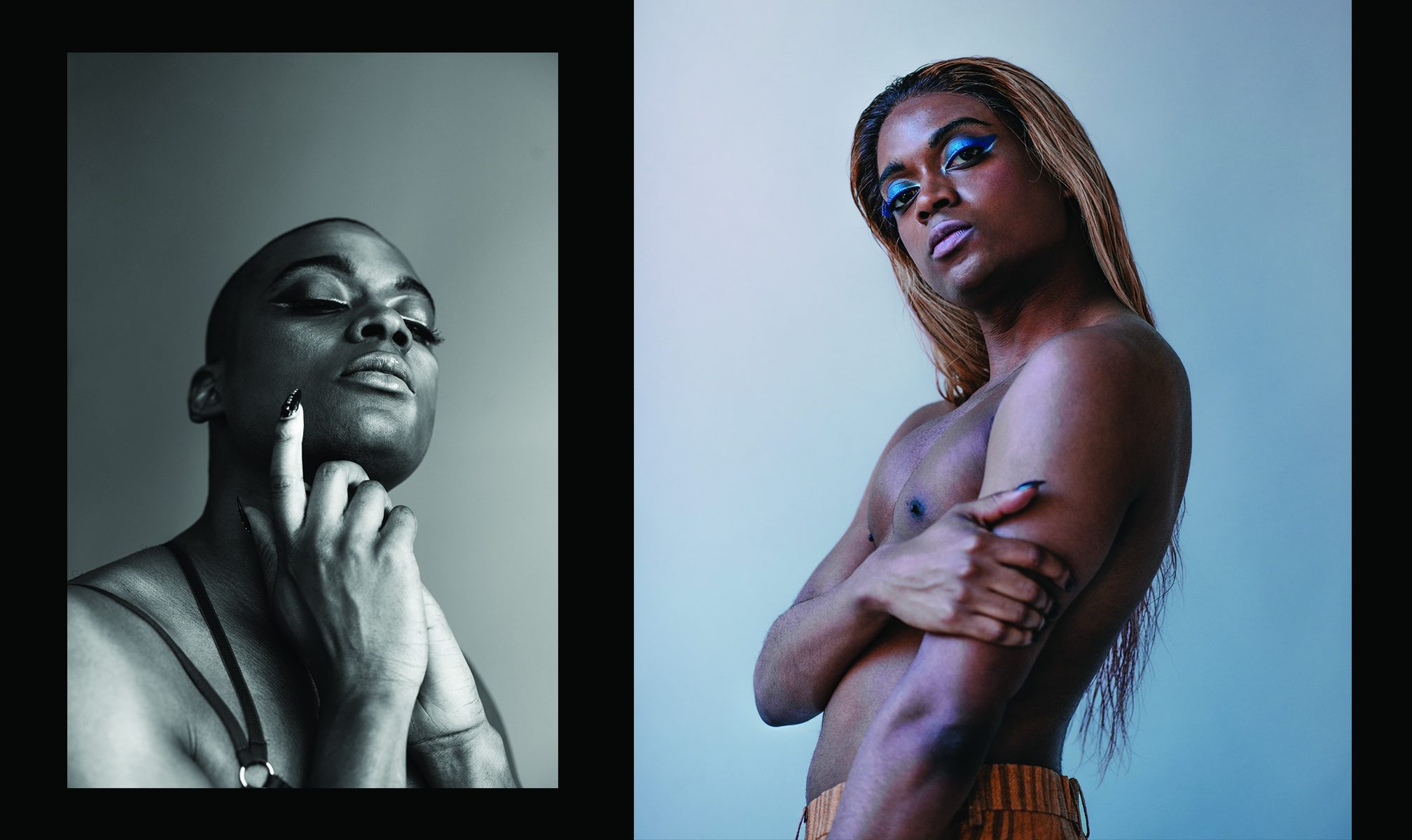 “No-one with a healthy sense of self goes out every weekend in the way that I was going out, because there’s going out, and then there’s going to the afterparty – and the after-after party,“ they say. “[I was] being an actual club rat.” Lotic laughs in self-deprecation, something that happens often throughout our interview: moments of appealing vulnerability that serve to elevate a heavy confession into comical theatricality.

With ‘Power’ comes a final reconciliation. They may have emigrated six years ago, but within the record’s lush instrumental framework its distinctly black American references – to Texan marching bands and Ta-nehisi Coates’ lyrical memoir Between The World And Me, for example – signal a long-awaited acceptance.

Last year, Lotic read Coates’ literary meditation on America’s history of racial brutality in the midst of their own personal strife. On December 30, 2017, they tweeted, “The black experience is having your day completely ruined by news of the death of someone you never met but still know you share a deep, unique unspoken bond” in response to Erica Garner’s death.

Asked about how perceptions of race differ in their new home, Lotic puts it plainly: “White Americans know when they’re being racist. You cannot avoid the history of slavery in America. That’s why it’s so sinister.” Racism in Berlin wears a different costume. “Here, it’s sinister because it’s ignorant, and they expect you to explain it to them. Like, I can’t explain all the history of Africa to you! It’s absurd to expect me to do that.”

Lotic knows their connection to the United States will grow more distant, yet remain utterly complex: “I know I can’t remove myself fully from America, or it from me,” they say. Coates’ book made them realise: “Everywhere is trash, but life is beautiful, and you have to take those moments. That first whiff of fog, a little bit of sweat; I feel like I can almost smell the lights – or lack of lights.” Lotic’s ‘club rat’ days are long gone, but they still describe the club as a sanctuary for personal expression. “The things that happen in the shadows are what we want to happen in the light. Not all the time, but we should be able to be that way.”

It also means leaving behind the masculinity they’ve always struggled with. “My mom asked me – and I’m not sure why, or what would have happened if I said yes – but I remember her asking me, ‘Do you want to be a girl?’. And I remember wanting to answer ‘yes’ since I was this big.” The iridescent eyeshadows, purple lipsticks, and long black, blonde, auburn, and wavy grey wigs are all a part of embracing femininity (“My wig is in my bag right now, just in case!”). They are considering hormone therapy, although they’re “not so attached to gender in that way.”

Although Lotic is hesitant to describe femininity in societally conventional terms, ‘Power’ speaks for Lotic’s matured internal identity. The album’s chamber instrumentals swell with new-found tenderness: soft, sweet, but always with an edge. Even though the signature saw-toothed sounds remain, there’s also empathy for the human experience. On ‘Power’s title track, it’s as if we witness Lotic shedding armour piece by piece in an ode to their long, internal road to deliverance. They were always familiar with finding raw emotion in rage, isolation, and discomfort – but what about in the whispers of intimacy?

How can I just be

With so much standing in between?

On ‘Solace’, the lyrics trickle through darkness, like the flowing water from which Lotic took their name. A distinct fluidity to match their maker. Finally, Lotic finds their voice.

‘Power’ by Lotic is out on Tri Angle on July 13