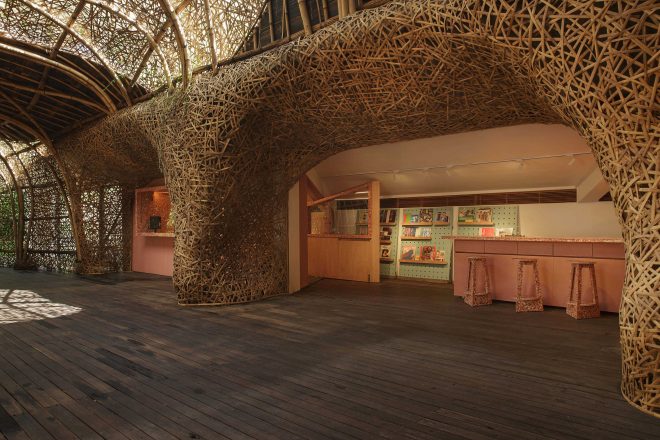 The new space is located on the same site as the beach bar and nightclub, and is set to double up as a digital streaming platform, designed to "shine a light on voices, stories and sounds from Indonesia and around the world."

Read this next: The Wildlife Archive tells you everything you need to know about dance music culture

The impressive space sits at the entrance of the site in Seminyak, under a 90-metre bamboo archway nicknamed 'The Womb' created by revered local artist Nano Uhero.

The building itself has been created to resemble local temples by architect Zhi Xiong Chan of ZXC Studio, using sustainable materials such as 564 kilos of recycled plastic, motor oil caps and bottle caps all collected from the Indonesian coast. The entirety of the 171 kilograms of flooring in the venue is comprised of industrial rubber rejects.

Read this next: You can now buy headphones made out of recylced vinyl

The space officially launched on October 2, with 30 artists from both Melbourne and Bali putting together showcase including Dea Barandana, DJ Jnett, Gabber Modus Operandi, Komang and Mairakilla.

Alongside providing a studio and record store for visitors, HEADSTREAM is doubling as a streaming platform - broadcasting live from the beach between 7:AM-7:PM (local time) every day, with guest streams from other locations in Indonesia such as Jakarta, Jogja, Malang and Badung.

Read this next: How dance music can limit its environmental impact

Though HEADSTREAM is kicking things off with music, Potato Head has its sights on documentary film streams and other varied progressions into arts and culture in the region.