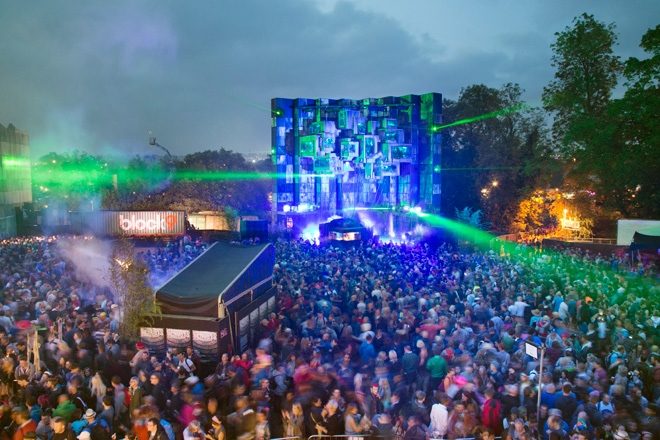 Glastonbury has revealed its new arena and project for 2019, IICON.

Dubbed as an "international touring art and music project", IICON will debut at Glasto this year to coincide with Block9 growing in size with another field in the South East corner of the festival.

The structure hasn't been built yet, but the Block9 team has described it as an "immense sculptural artwork" that poses questions about "power, technology and humanity in the digital age."

Glasto-goers can expect the 15,000-capacity arena to be "a colossal, anonymised head - epic in scale, sinister in nature."

"The head lies motionless in sleep... or in death. Human features have been erased, replaced by a vast array of pixels. Ethereal visions of human history pass across the surface depicting tragedy and beauty, humanity and technology, art and artifice."

Footwork, grime, electro, algorave, dub, post dubstep and IDM can all expect to be heard in IICON at Glastonbury this year. It'll also be there next year as Glasto celebrates its 50th anniversary.

Stage two of IICON will see it going on an international tour in 2020, visiting cities such as London, New York, Los Angeles, Sydney and Shanghai. Each location will feature different line-ups.

Gideon Berger of Block9 said: "There are certain groups of artists, musical movements and individual pieces of music that, when interrogated, tell an incredible human story; a story that today may be easily forgotten as we are prescribed a severely limited repertoire via our smartphones.

"Our consumption of music as commodified entertainment totally overlooks the social, political and historical narratives that gave birth to this music in the first place. IICON unpacks multiple loaded musical phenomena from the last 100 years and prompts the reveller to delve a little deeper into music".

Stephen Gallagher of Block9 added: "IICON represents the data-fuelled power of faceless multinationals and personifies how humanity has found itself trapped in self-imposed, digital bondage. It is our response to the world we live in today."

Block9 enters its 11th year this year and has so far donated £66,000 to various causes, including an AIDS hospice in Zambia, MSF and rescue operations in the Mediterranean Sea.