NYC Downlow is an unbeatable haven of night-world depravity, juddering analogue house, sex, mud-encrusted trannies, moustaches, sex, underground disco, game-changing global DJs, sex, strobes, hardcore homo frolicking, and the stench of amyl nitrate. It’s a queer bacchanal that never stops, a New York Meatpacking District warehouse party where homo, hetero, lesbian, bi, trans and anything in between are all thoroughly welcome, replete with sides of beef and hairy bear “gay butchers” ripe for priapic kicks. It’s all day, it’s all night, and, like Berghain (of which more later), cameras are verboten. What goes on at NYC Downlow stays within its dark and sweaty confines. This is clubbing as it once was – and ever should be.

“The intention,” explains Steve Gallagher, half of the NYC Downlow team, “is for people to have an amazing time but leave having experienced something much more than that.”

“It’s not about consuming entertainment through a device or even a performance, it’s about participating,” adds Gideon Berger, his creative partner. “It’s about the original spirit of dance music, so about each other, about turning off your phone and engaging. The lasting thing that the thousands who’ve come through Downlow have said is that people meet other people there. It’s a gay venue, but it’s inclusive. Straight people can come if they want. Anybody can come as long as they’re a freak.” 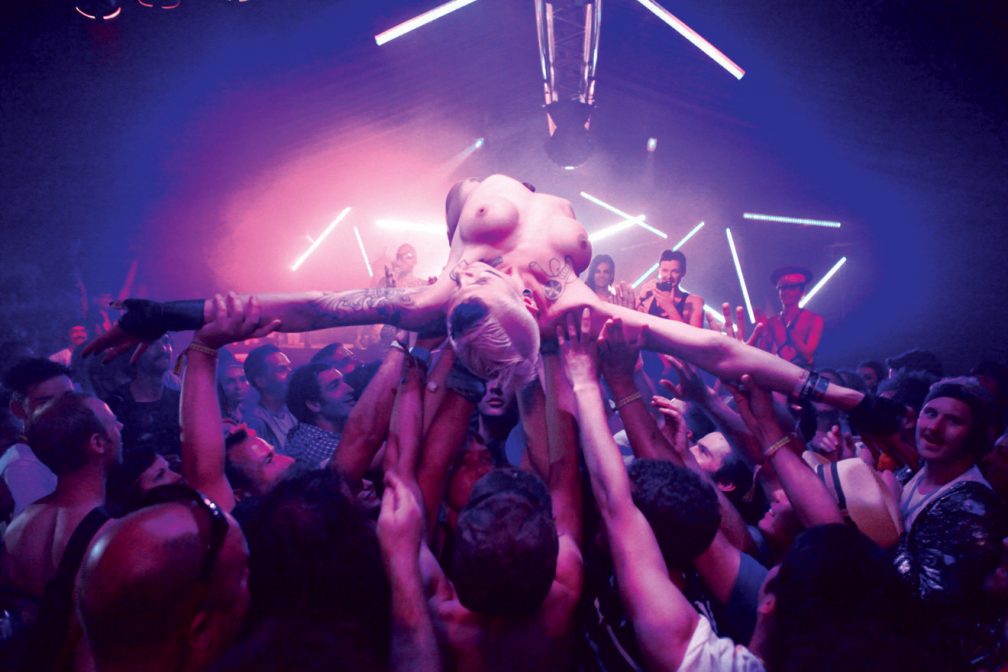 As radical set design outfit Block9, Gideon, 39, and Steve, 45, worked on Banksy’s Dismaland project and have built stage environments for Skrillex and Lana del Rey. They’re working with Jamie Hewlett as production designers for the Gorillaz’ 2017 live tour and as art directors of creative content for the new ‘Humanz’ live show. Block9 are also lead artists with Hewlett and Damon Albarn in the creation of the group’s Demon Dayz Festival, from concept development and graphic design through to set design for the festival’s stages. At Glastonbury alone they’re also responsible for sci-fi/post-apocalyptic dance venues Genosys and London Underground. But the Downlow is the jewel in the crown.

The £2 every Downlow clubber pays for a stick-on moustache has raised £57,000 for causes close to Block9’s heart over the last decade, such as Médecins Sans Frontières, the Human Dignity Trust and the Mother Of Mercy HIV AIDS hospice in Zambia. The moustache seems to give its wearers license to become even wilder.

“Life is a performance,” smiles Steve. “Downlow is an opportunity to wear your other self, do your own thing, discover yourself.”

“Or go in the dark room and discover other people,” adds Gideon for, as well as Maceo’s, the backstage bar that never shuts, Downlow boasts a bathhouse dark room where anything can happen – and frequently does.