“It’s funny, people think that Rashad taught me everything,” says DJ Taye; “he didn’t have time for that.” The untimely demise of DJ Rashad in 2014, the face of footwork and its brightest, most innovative star, was a body blow to the freshest sound to come out of Chicago since house music. But a few years on his one-time apprentice, Taye (aka Dante Saunders) is carrying the torch.

“The past five years for me and footwork have been pretty epic,” says the 23-year-old, sipping on a whisky and ginger at the elegant, oak-panelled downstairs bar of Washington DC’s Flash Nightclub, where he’ll perform tonight. “Shit. Footwork’s expanded into greater acceptance and elevation, you know, and I’m just spreading it to more people and places worldwide. Hyperdub [the label for Taye’s ‘Still Trippin’’ album] is in London, there’s people hearing this sound all over Africa now, Asia, everywhere.”

DC may not be footworks’ home turf, but the setting is apt. Nearby is the famous Howard Theater where, back when this neighbourhood was called the ‘Black Broadway’ and occupied by mainly African-Americans, the likes of Duke Ellington, Marvin Gaye and James Brown wowed capacity crowds.

In black Teklife dad hat and jacket, Rashad ‘I Just Don’t Give A Fuck’ EP promotional T-shirt and slim sweat-pants with a white Adidas logo across the knee and thigh, 23-year Taye is thin and angular in build, and when he places his clenched fist and knuckles against his chin while buried in thought, he looks like a cross between NWA frontman Eazy-E circa 1988 sans jheri curl and an adjustable mannequin posed like Rodin’s Thinker.

On stage at Flash, an acoustically treated bandbox with a Funktion-One system, Taye bobs non-stop behind his laptop as he drops a set that offers a sense of footwork’s crossover potential in microcosm. This crowd is more used to house and techno, but while at first there are a few furrowed brows as the music leans more towards the percussive than the melodic, Taye puts his own tracks in context with a few soulful bridges, like a saxophone-laden snippet of Pete Rock and CL Smooth’s 25-year old jazz-rap classic ‘T.R.O.Y.’ slathered in 808s. Lead track ‘Trippin’ suggests the potential of Taye’s brand of footwork: moody bottom end, a palpable trap-tinged breakbeat and considerable pace are complimented by 8-bit synths that recall Super Mario and Taye’s rap bars. The original, darker-edged sound that once paired well with UK funky, jungle and d’n’b has expanded to include bright wonder, whimsy and bankable appeal, and Taye is leading the evolution.

“Where I think I’ve helped expand footwork is by smoothing out the spectrum of the sound. When Rashad started heading in that smooth direction, on [2013 EP] ‘Double Cup’, he messed my head up! I was making tracks that were smooth back then, but I learned how to give space to the sound and keep those hi-hats present, too. It has to be a perfect combination. You want it to sound just like a regular r’n’b song, but the footwork element is present. That’s the secret.”

One of the many DJs from Chicago’s original Teklife crew now touring internationally, Taye lives in Los Angeles now, “because it’s where the bigger electronic industry is”. The broader appeal means more financial sustainability and awareness of an expanded sonic palette for the genre, along with a greater pop sensibility. Indeed, one of the unexpected champion sounds of 2017 was Indiana-based producer Jlin’s ‘Black Origami’, one of the albums of 2017 and another example of how footwork is evolving. It showcased the many moods and themes which the genre can now encapsulate.

Chicago, though, remains at the heart of footwork. DJ Rashad, aka Rashad Harden, was the public face of the city’s Teklife collective, and a breakout global star on the rise, when he died from a heroin and cocaine overdose in 2014. Six months prior to his death, Rashad noted Teklife’s explosion and evolution that the crew was “[It’s] well-rounded, not just this hard musical thing. The music has grown to other countries, and fans there have put their input into it. We’re just going to keep on doing what we’re doing. As long as it gets the attention it deserves, that’s what I’m concerned about.”

Five years later, Taye echoes these sentiments. “Teklife still goes hard. I’ll be in the studio with DJ Manny or DJ Paypal, and I have to go hard. It’s fun. We push each other to see how hard we can go, what we can come up with. But that’s not all I’m doing. I’m thinking more about what I want the tracks to say, and how they can actually affect people’s minds as much as their moods.” 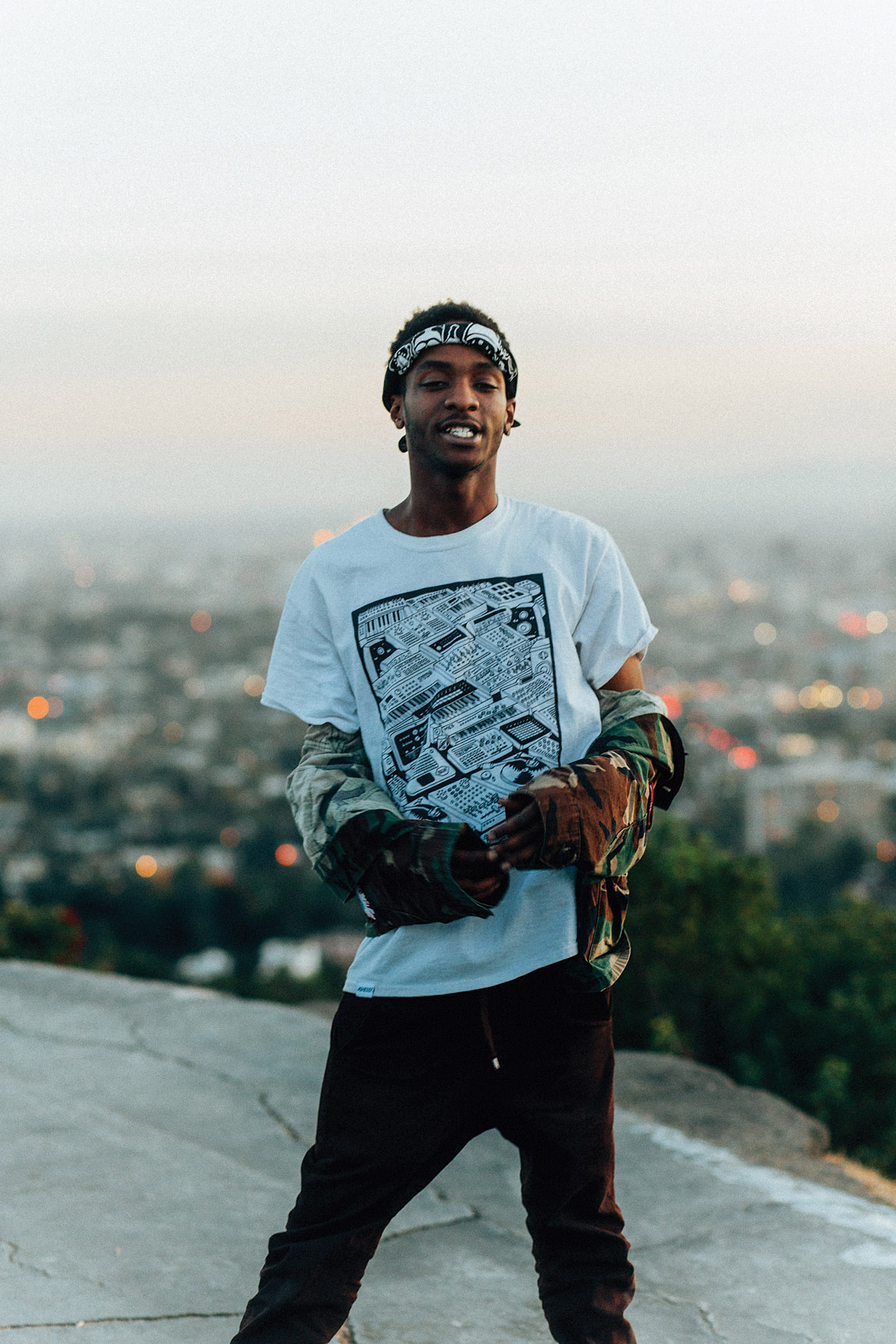 It’s a mission that finds a natural home at Kode9’s Hyperdub Records, says Taye. “Rashad told me about them in 2012, and in doing my research I was like, ‘Whoa, Flying Lotus released records [with] them?’ That’s when I was sold.” His album ‘Still Trippin’ is a cohesive presentation of what’s been a steady stream of edits, remixes and occasional Hyperdub-released singles. “This album is a psychedelic mind trip, a drug trip, whatever you want it to be,” says Taye. On it, he explores his expansive imagination while also reckoning with the loss of his mentor. “This is me telling the story of my journey as a producer, discovering where my sound was headed after DJ Rashad died. Everything about this was a journey and a discovery, too. I mean, I even lost my computer and had to reprogram songs from scratch.”

“If DJ Rashad was the evolution of DJ Earl, then Taye is the evolution of Rashad,” says Complex Magazine’s senior editor Khris ‘Khal’ Davenport, a longtime footwork enthusiast. “[‘Still Trippin’] has Taye in an interesting place. He’s doing a lot of his own rap vocals. I think he puts a dope spin on footwork in general.”

Taye’s rap roots are a key part of how his album evolves the footwork sound. “Chicago artists love going outside of the box,” says Taye of the home of Kanye and Chance The Rapper. “I started as a rapper and rap producer. I made spacey trap beats back in the Soulja Boy ‘Crank Dat’ era [of 2007], and I have family down in Atlanta, so I saw all of the spaces where electronic, dance, and rap could intersect. As an MC, I speak my mind. Like, I don’t make ‘conscious’ records, but I have always been aware of what I am saying, and want it to mean something.”

“Teklife still goes hard... but I’m thinking more about what I want the tracks to say”

“Hip hop is nothing more than jazz, r’n’b and soul,” says footwork progenitor RP Boo. “When you mix footwork and hip hop you keep that old-school power in the sound, the heart and spirit of it. It can chill in the background, it can be front and centre – it’s an important element for sure.”

“I’m trying to create a vibe in a space,” says Taye. “That goes for this music in general, too. I want to create intrigue in and around the genre by using rap to pull people into being interested.” He pauses, finishes his whisky ginger, and looks as if he’s trying to locate the best words to explain his exact frame of mind. “On this album, I learned from anybody, everybody and everything. It represents the evolution of where everything – Teklife, my rapping, my production, people, the world – it represents where it’s all headed.” As for the future: “One day I want to buy an island,” he says. In this neighbourhood there’s a century-long history of innovative African-American artists dreaming big dreams, and Taye isn’t out of place. Not at all.


‘Still Trippin’ is out on Hyperdub March 2