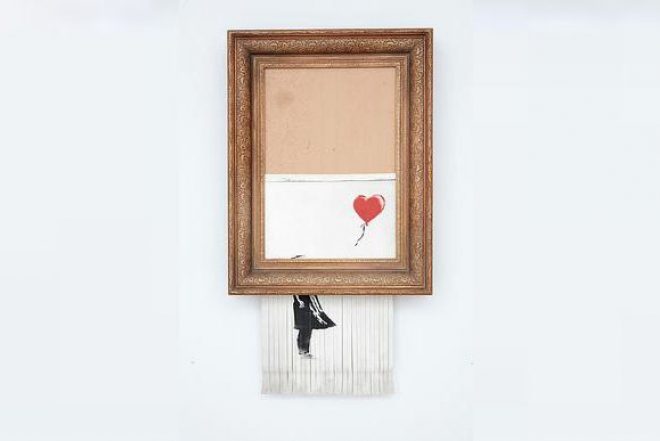 Banksy’s Love Is In The Bin - originally titled Girl With Balloon - is back on sale after fetching £1.1 million at auction in 2018.

The painting will now be going back under the hammer at Sotheby’s, a fine art company based in New York.

Banksy’s Girl With Balloon painting self-destructed after being sold at auction in late 2018 to the shock of onlookers and was subsequently renamed Love Is In The Bin.

The painting now appears half-shredded after "falling" through the bottom of the frame but was in fact shredded in a prank reveal. Girl With Balloon was voted the nation’s favourite artwork just a year before.

The ambiguous artist was said to be making an anti-establishment statement with the destruction of his own work, which was operated by remote control.

“I’ll be quite honest, we have not experienced this situation in the past, where a painting is spontaneously shredded upon achieving a record for the artist,” said Alex Branczik, Sotheby’s head of contemporary art in Europe.

The original painting, mounted in a Victorian frame, was created in 2006 and fetched $1.4 million at auction prior to its self-destruction.

It will now appear back at Sotheby’s in October three years since it last went under the hammer, and is thought to grab between four and six million pounds.

Multiple new Banksy artworks have popped up across England in recent weeks, most of which are around the East Anglia area. A Banksy expert confirmed the legitimacy of the new paintings which appeared in Norfolk and Suffolk.

Love Is In The Bin will go on auction at Sotheby’s on October 14.