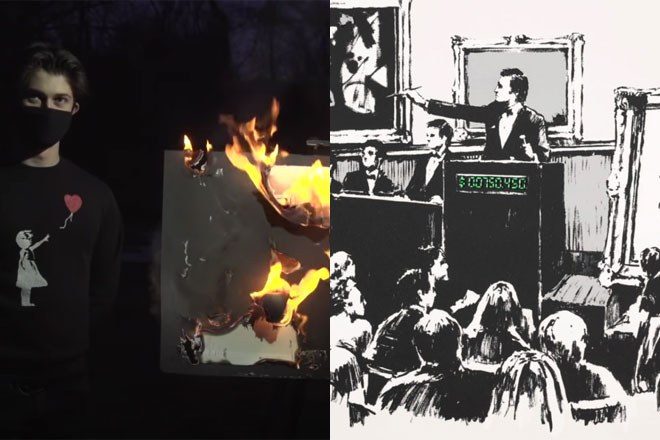 A crew of cryptocurrency, blockchain and contemporary art fans bought a Banksy artwork only to burn it and sell a digital version for four times what it was previously valued at.

The group – described by Decrypt as "blockchain investors and professionals" that includes "members of decentralized finance projects Injective Protocol and SuperFarm" – acquired Banksy's morons, which has previously been valued at $95,000 and first sold in £16,250 in 2006.

Read this next: Here are all the items you can buy from Banksy's online shop

The painting riffs on the record-breaking sale of Van Gogh's Sunflowers in 1987 and features the text “I can’t believe you morons actually buy this sh*t.”

The group digitised the artwork before burning the physical version, footage of which you can view below. They then sold the digital artwork as a non fungible token (NFT) for $382,336.

The sale was made via Open Sea to a buyer called GALAXY and the transaction was made in the cryptocurrency Ethereum.

A member of the crypto crew who sold the art said: “We view this burning event as an expression of art itself. We are generating a new form of artwork via the creation of this unique NFT that is a direct representation of the physical.”

“We specifically chose a Banksy piece since he has previously shredded one of his own artworks at an auction,” they also said.

NFTs are part of Ethereum's blockchain and are currently having a pop culture moment as artists experiment with selling digital art, including music, with the technology.

An NFT can be unique, such as this new version of Banksy's morons, or be duplicated, similar to "editions" of art prints or vinyl in the physical realm.