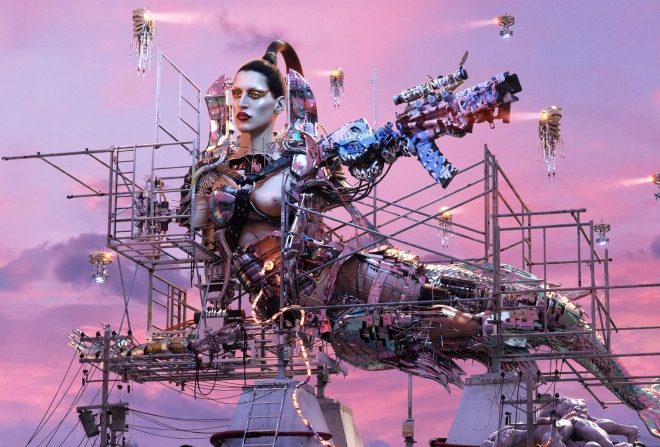 Arca has just announced the release of yet another album 'KicK iiii'.

This album, which features Oliver Coates and Planningtorock, is set for a December 3 release - the same day her other albums 'KicK ii' and 'KicK iii' are due for release.

Read this next: Arca announces another new album, 'KicK iii'

On Instagram, the Venezuelan artist wrote: "kick 4 is an entry of sensual charge in the cycle; my own faith made into song, a posthuman celestial sparkle, psychosexual pulse-width modulation, queering the void, abyss alchemically transmuted into a deconstruction of what is beautiful.

"It is a healing spell, recognition of the alien inside, a bursting apart of old skin, fresh new sinew rippling outward from a beating core, the first prenatal kick — proof that there is a sentience with a will beyond its creators’ control expressing itself from within the womb."

One of the tracks on the album, 'Queer', is available now. Arca said that 'Queer' - which features Planningtorock - is an anthem "celebrating courage in the face of prejudice" and is a celebration of queer love in "all of its forms".

Speaking on the track, Planningtorock said on Instagram: "The augmentation of queer existence queer love and my internal waterfall of fire is the beating heart behind these lyrics.

"I love you Alejandra and I’m so proud to sing together with you on this beautiful and epic queer anthem you have created".

'KicK ii' is a deconstruction and reinterpretation of the reggaeton that Arca was accustomed to in her adolescence. 'KicK iii' sees Arca return to the club nights that shaped her early adulthood, and 'KicK iiii' sees an expansion of this, with a new element of xenopop and a glimpse at Arca's sensual side.

The complete cluster of albums will be out on December 3.

'Queer' is available on all streaming platforms now.

Listen to 'Queer' below.