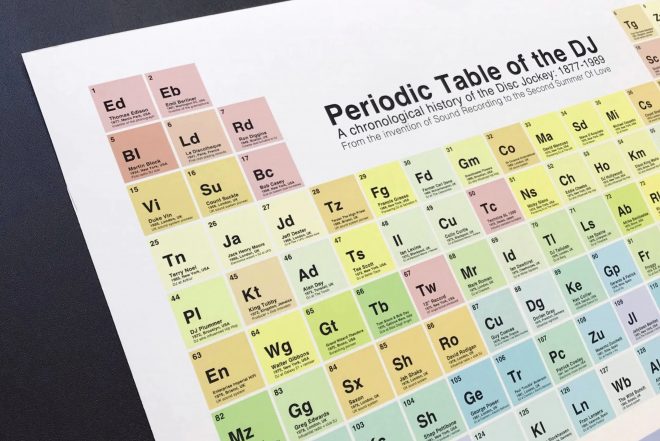 Following from 2018-unveiled artwork, The Periodic Table of the DJ, a new and updated version has just been released.

The artwork, which was influenced by Bill Brewster and Frank Broughton’s book Last Night A DJ Saved My Life, was originally produced to commemorate 30 years since the Second Summer of Love -with a focus on the acid house era and the evolution of music over time.

Created by Paulo Guimaraes, who comes under the artist name Misfit, The Periodic Table of the DJ is a chronological history of pioneers in dance music, right through from Thomas Edison who created the phonograph in 1877, to more recent house music trailblazers.

The artwork documents over 100 years since the first audio creations, with segments for pioneers, clubs, soundsystems, equipment, and genre-specific parts such as Northern Soul, pre-hip hop, UK house, US house, and post-disco.

Now expanded from its 2019 debut, Misfit has created an extended version of the artwork taking the “journey across the table takes in the inventors, pioneers, clubs, DJs, west Indian soundsystem selectors, northern soul champions, disco behemoths,” and more.

Read this next: Mark Vessey has created a new artwork inspired by Mixmag

“The original print run has now sold out, so for 2021 I have an updated edition which widens the history including many more key figures and a new design,” he posted on Instagram.

Grab a limited print of 'The Periodic Table of the DJ' here.