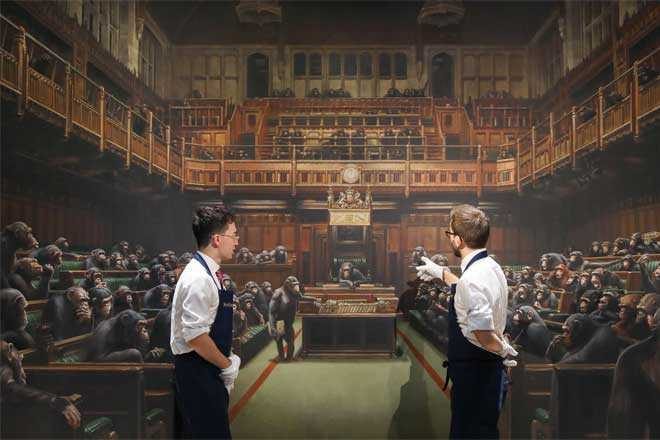 Banksy’s ‘Devolved Parliament’ oil painting, which swaps MPs for Chimpanzees in the House of Commons, sold at auction for almost £9.9m on Thursday October 3.

Stretching nearly 4m (13ft wide), the art was created by the artist 10 years ago, for the Banksy takeover of Bristol museum in 2009.

After a heated 13-minute bidding-battle, the painting sold for nearly five times its £2m estimate at Sotheby’s, London.

This is largely due to its cultural relevance and close link to the Brexit debate that has been ongoing for the past few years.

Read this next: Banksy is offering free art to people voting against the Tories

Banksy appeared to question the price of the painting by posting a quote from Robert Hughes on his Instagram account: "Instead of being the common property of humankind the way a book is, art becomes the particular property of someone who can afford it."

The auction came a year after the shocking stunt at Sotheby’s where Banksy’s ‘Girl With Balloon’ graffiti mural was intentionally shredded by the artist, moments after selling for more than £1m.