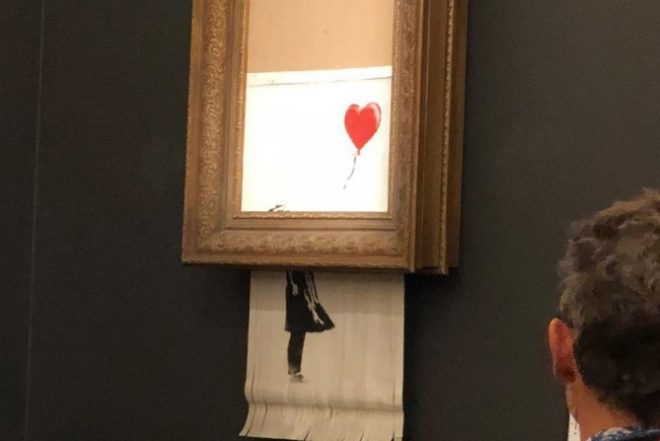 One of Banksy’s most famous pieces, Girl with Balloon, was auctioned off at London auction house Sotheby’s last night for a cool £1.042 million.

While this figure is far from unusual when it comes to the elusive artist's work, it’s what happened next that took a turn for the unexpected.

Moments after the sale was completed, an alarm sounded and the stencil spray painting appeared to shred itself, passing through a mechanism hidden within the canvas’ frame.

Taking to Instagram, Banksy posted a picture of the shredding in progress, photographed alongside a sea of surprised faces who were watching the prank unfold. He captured the post, “Going, going, gone…”

Sotheby’s have already issued a statement discussing the stunt. They described the prank as, “instant art world history”, adding that it, “certainly marks the first time in auction history that a work of art automatically shredded itself after coming under the hammer.”

“It appears we just got Banksy-ed,” said Sotheby’s Senior Director and Head of Contemporary Art in Europe, Alex Branczik.

The piece in question depicts a girl and a red heart-shaped balloon. It originally appeared on a wall on Great Eastern Street, London, and last year it was voted the nation's favourite artwork. The £1.042 million figure it sold for matched Banksy’s previous record at auction from back in 2008.

The identity of Bristol-born street artist Banksy has never been officially confirmed, however last year Goldie appeared to reveal the artist’s name in an interview, referring to Banksy as “Robert”. Although he only hinted at a first name, many assumed he was referring to Massive Attack’s Robert ‘3D’ Del Naja.

Immediately after the gavel drops and this Banksy is sold for ~$1 million, a remotely activated shredder concealed inside the frame reduces the artwork into to ribbons. Brilliant. pic.twitter.com/7eJG1cO0Bt