Detroit has been hailed around the world as the birthplace of techno and one of the cradles of the entire electronic dance music for decades, but that part of its history hasn’t always been appreciated in the city itself, where cultural institutions and tourism ads still give more shine to Motown, the Stooges, and Jack White, and other music that appeals to rich white Boomers. This year’s Movement Music Festival showed how much that’s changed since the event—formerly known as the Detroit Electronic Music Festival—launched 22 years ago, and how much it’s changed even in the two years since the last time it was held.

Movement has a global draw, both in terms of its talent and its audience, but the real star is Detroit—not just local talent, but the city itself and the myth of the city that’s built up since techno was born. Walking into Hart Plaza, a 14-acre site full of modernist sculpture next to the Detroit River, just steps from the recently revived downtown, where the festival’s been held since its earliest days, the first thing you notice is the sheer number and variety of T-shirts worn by attendees advertising the city: “Detroit hustles harder”, “Detroit Fucking Michigan”, 90s-era bootleg Pistons championship T-shirts, or simply “Detroit.” The crowd is diverse—Black, white, young, old, queer, straight, hippies, families, boys with TikTok hair, and every species of raver imaginable—but united by a passion for Detroit music, or maybe just what it represents about the city and its history. 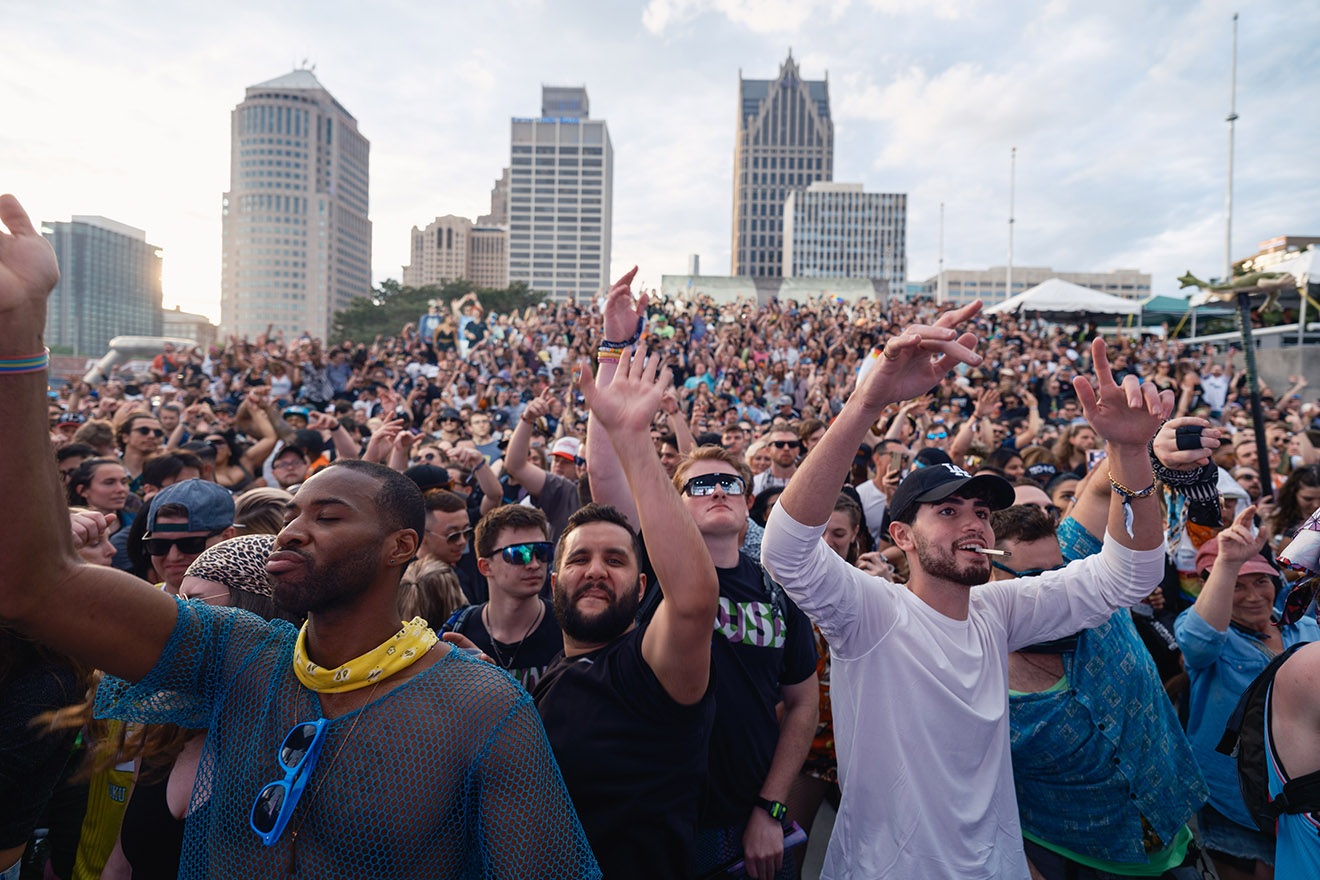 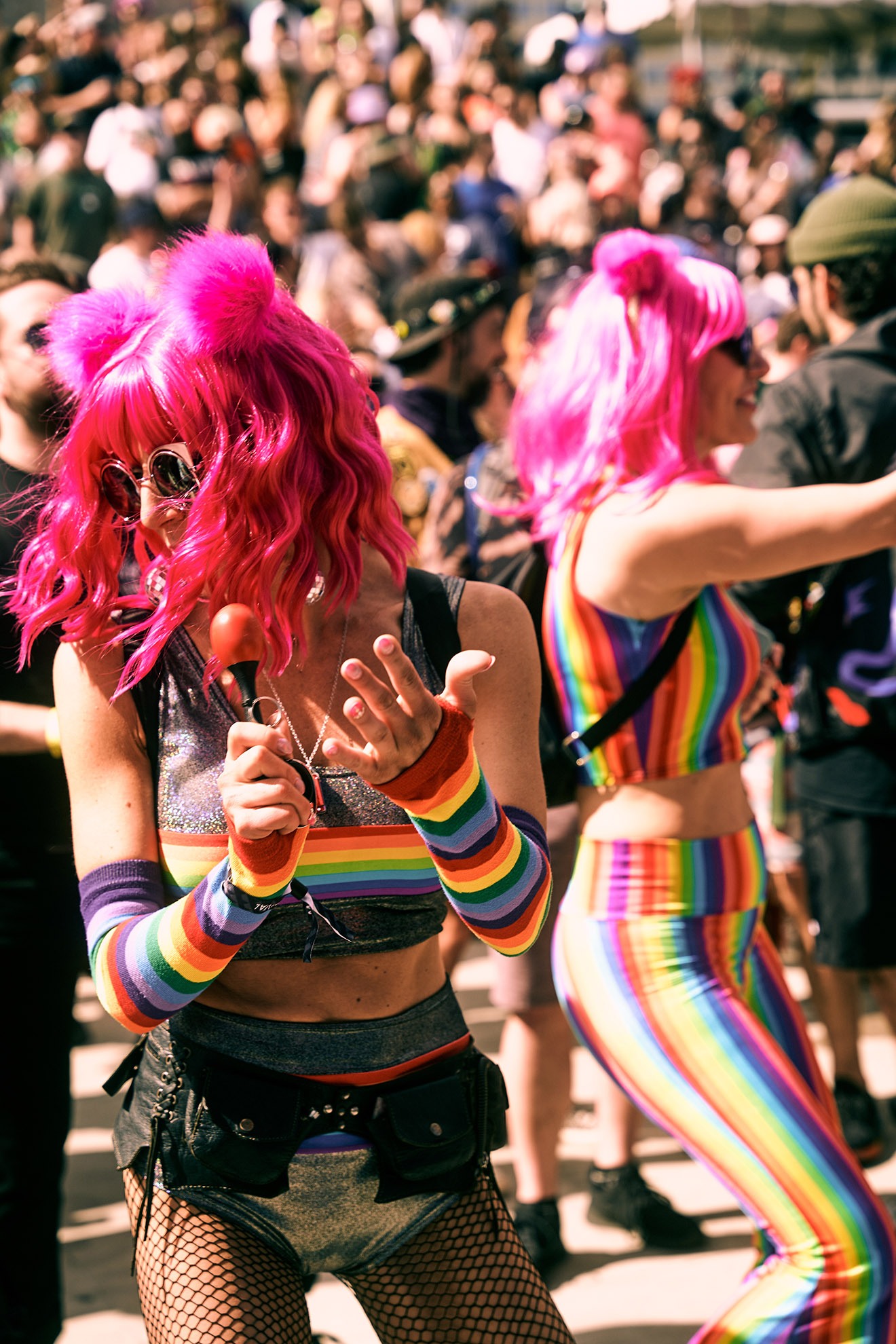 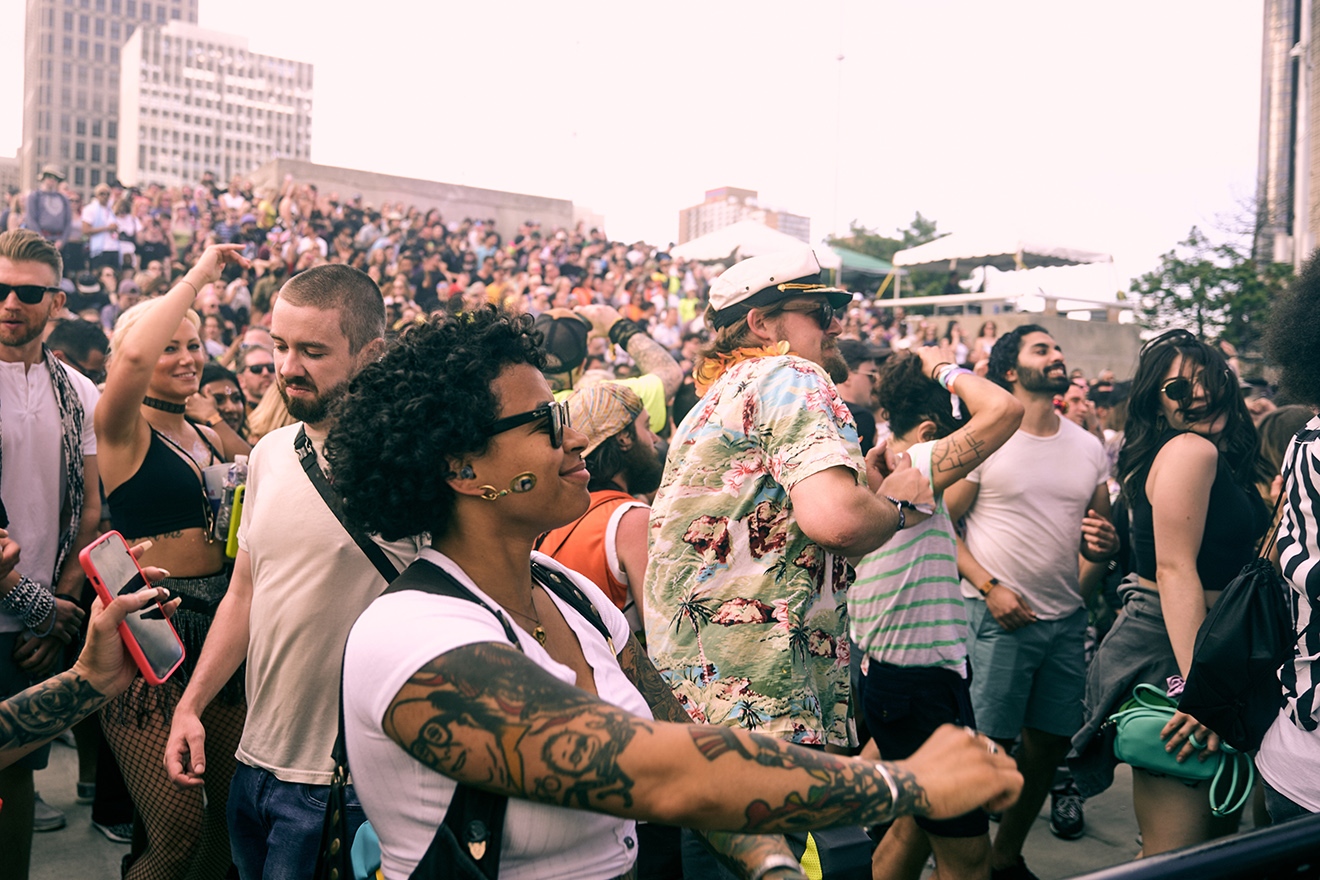 The opening night was a showcase of Detroit techno and the local dance culture, spanning a range of subgenres. DJ Godfather, an icon of the local ghettotech scene, delivered an early-evening set packed with frenetic 140-plus BPM beats, Serato scratching, and classic local hits like his own 'Player Haters In Dis House' that have been holding down Detroit parties since the late '90s. Halfway through his set, a trio of dancers appeared onstage for a brief demo of jit dancing, the less-well-known relative of Chicago footwork that’s native to the D.

Later on, local legend Carl Craig, one of the co-founders of the original Detroit Electronic Music Festival, took to the Stargate stage for a performance that pulled techno’s genre-spanning origins to the front: rubbery, tight-laced funk as organic and soulful as it was machine-precise, squelching 303 leads, and vocals diced into hypnotic micro-loops. Four decades into his career, Craig remains one of the coolest figures in Detroit music, and maybe on the entire planet, barely moving aside from tight little head-bobs as he turned the beat inside out again and again with a level of control that comes from investing an ungodly amount of time and thought into his craft. His nonchalant talent and willingness to follow the groove out into the far reaches of psychedelic improvisation felt like how it must have been to see Miles Davis in his 70s prime, without any of the contempt for his audience that Miles had developed by then. 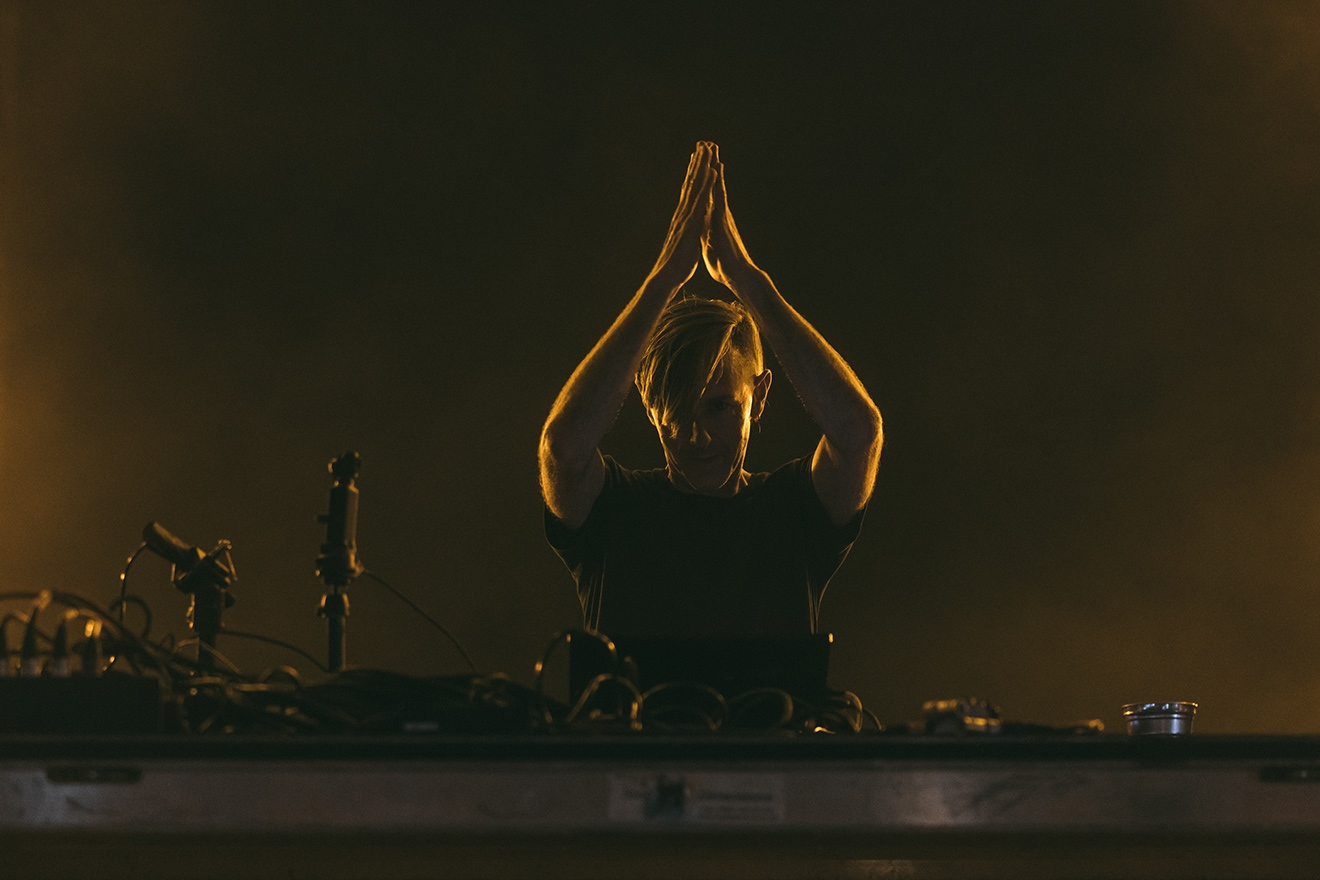 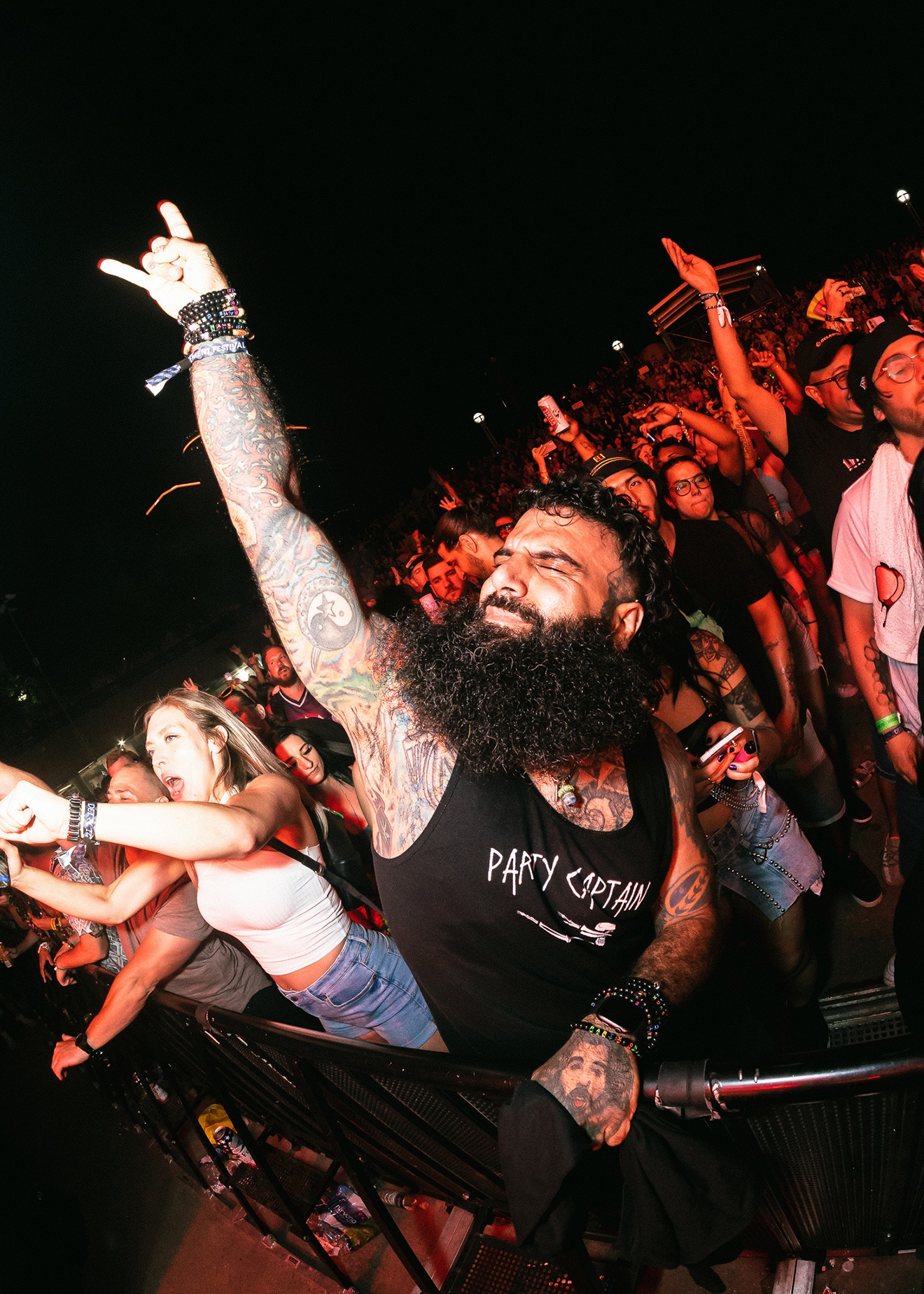 Richie Hawtin, the most rock-star-like figure in techno’s second wave, delivered a similarly masterful headlining set on the main stage, overlooking a concrete amphitheater that stayed packed full the entire weekend. For two hours he stayed relentlessly focused on a minimal beat that was almost Zen-like in its simplicity, focus, and depth, bouncing polyrhythms off a heartbeat four-on-the-floor while he pushed the crowd into a state of pure ecstasy, making the massive stage feel like a warehouse rave.

Down in the fittingly named Underground stage, squeezed into a cave-like concrete space beneath the amphitheater, the earth-shaking low end from Hawtin’s stage bled into a searing performance by local hero DJ Stingray 313 that would stand as the most inventive and eye-opening set of the weekend. Clad in a black balaclava and a T-shirt emblazoned with the classic blackletter D for Detroit, his selections pulled sounds from across Detroit techno and electro history, from syncopated club beats to droning synths right out of a Cybotron track to an aggressive reimagining of ghettotech that suited the stage’s bunker-like atmosphere. 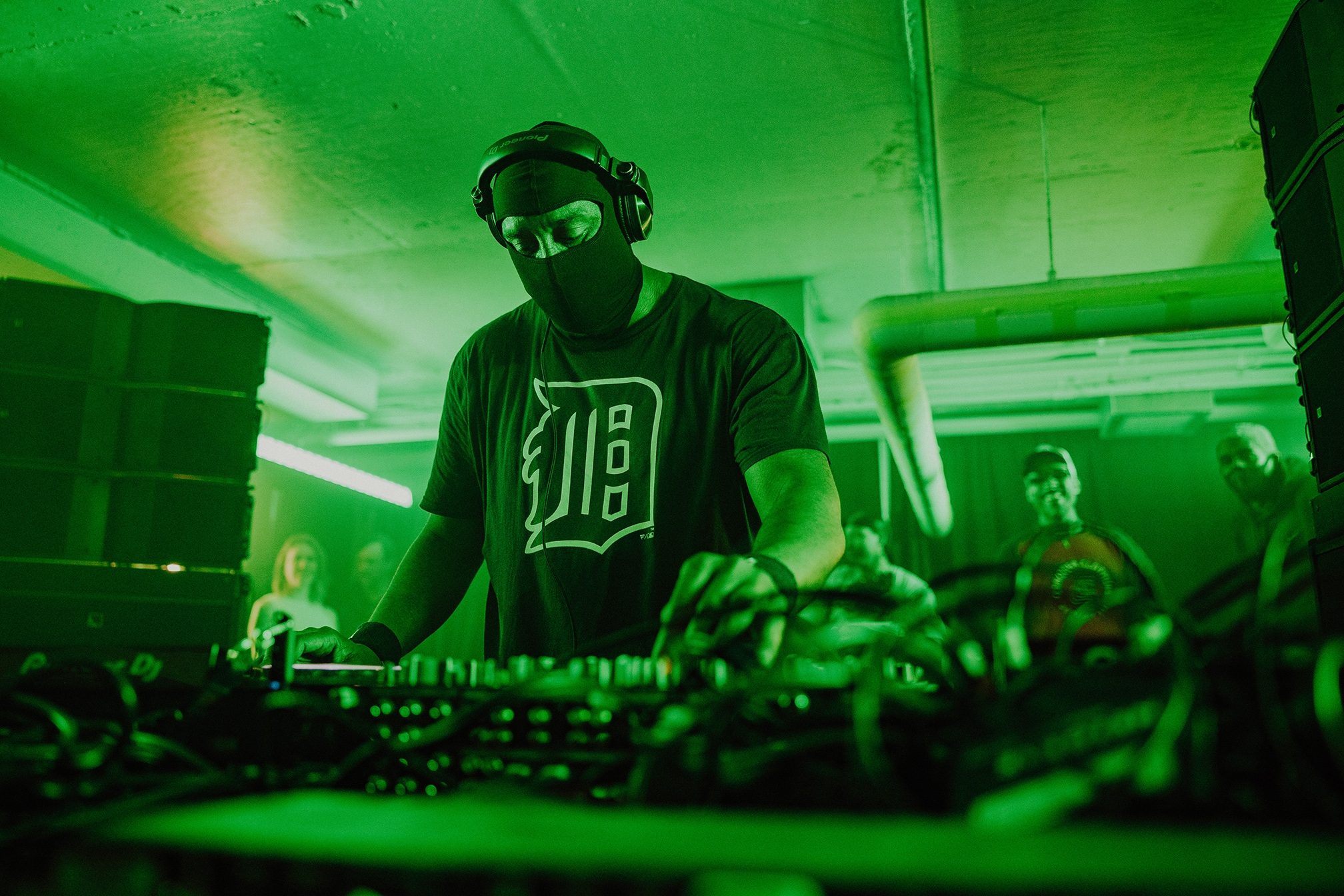 “Living in Detroit has definitely changed me as an artist,” Will Clarke told me backstage after his Sunday set. He relocated from New York five years ago after running into a friend at Movement who’d bought a building in the city. “The winters are raw here, and it makes the music rawer.” According to Clarke, the wave of gentrification that’s transforming downtown, where you can find a Shake Shack and a Starbucks in storefronts that were once abandoned, hasn’t completely eliminated the unique outlaw atmosphere that the original techno scene flourished in. “The scene is very small. You might not have thousands of people showing up for an event, but you can have a fucking good time. The police don't really give a fuck, so we can have a warehouse party and nobody will shut it down. You go to any other city in America, you can't do that. Even downtown there are properties where you can throw parties. I have a feeling that'll go away, but for now you can do whatever you want.”

The thriving rave scene was on full display at the Underground stage all weekend, where artists like 999999999, Paula Temple, and Dax J filled the brutalist space with unrelenting, high-speed beats and sinus-shaking bass for a tightly-packed crowd that took residence there for the span of the festival. Hidden away from the sun-drenched atmosphere above ground, the vibe is the shadowy opposite of the utopianism that suffused the rest of the event. The whole thing channeled the feral, post-apocalyptic energy that’s defined raving during the COVID era. 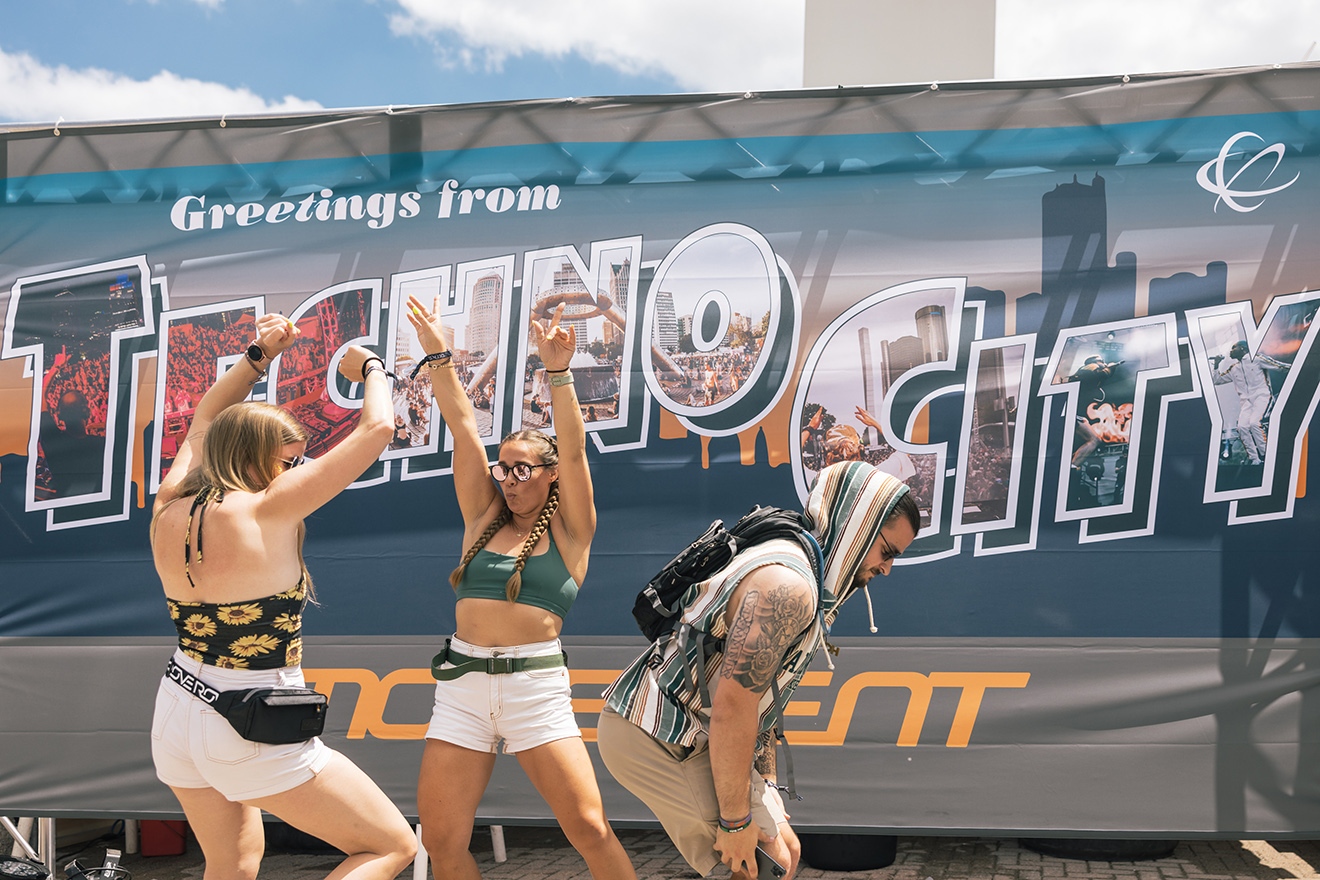 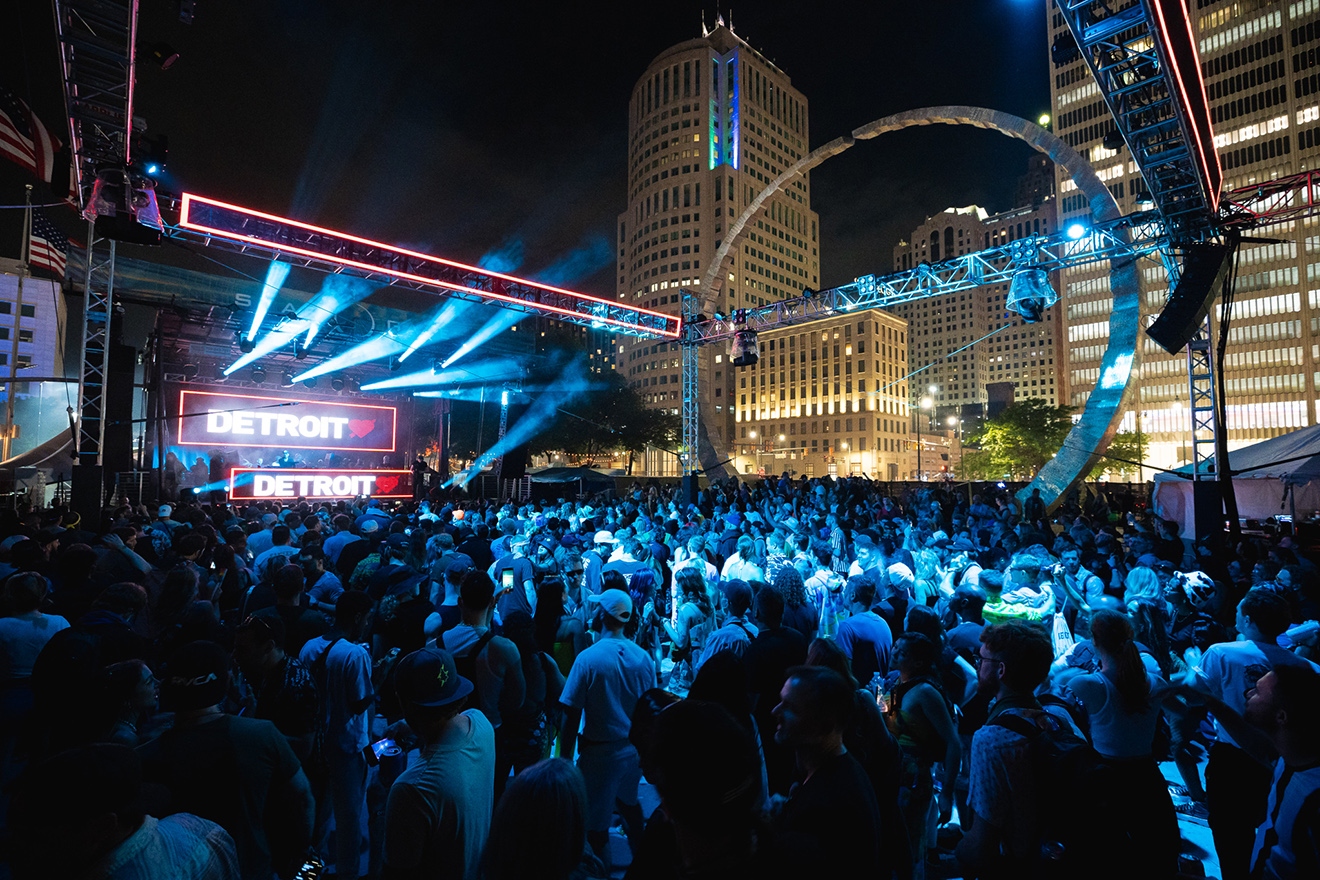 Upstairs, Juan Atkins’ set inspired pure pleasure, refined hedonism that made it easy to imagine the Stargate stage as a time warp back to techno’s first wave. It wasn’t hard to see parallels between Movement and institutions like the hippie-era jazz and folk festivals that put ancient blues performers on stage for an audience looking to soak up their struggle-born authenticity along with their music. But none of the techno originators at Movement are museum pieces—they’re still engaged and evolving, still deeply interwoven with the culture they helped create. Atkins may be approaching his 60s, but he moved bodies as effectively as any of the younger DJs sharing the bill.

“Techno is part of the mythology of the city,” Carl Craig told me on Memorial Day afternoon, after a Sunday night B2B set with James Murphy that broke the genre down into the funk, disco, and jazzy breaks it was originally built from. “I love that we have this mythological status here. But I also love that my brothers stayed in Detroit, you know,” he says, referring to Detroit's numerous musical icons who have stayed residing in the city such as Juan, Theo Parrish, Moodymann, Kevin Saunderson and Stacey Pullen. “I just wish that it was better represented all year long. You know, if it was a Motown festival, then we'd have a Motown Café, we'd have Motown being played at Pistons games and all that. But we're almost hiding in plain sight.” 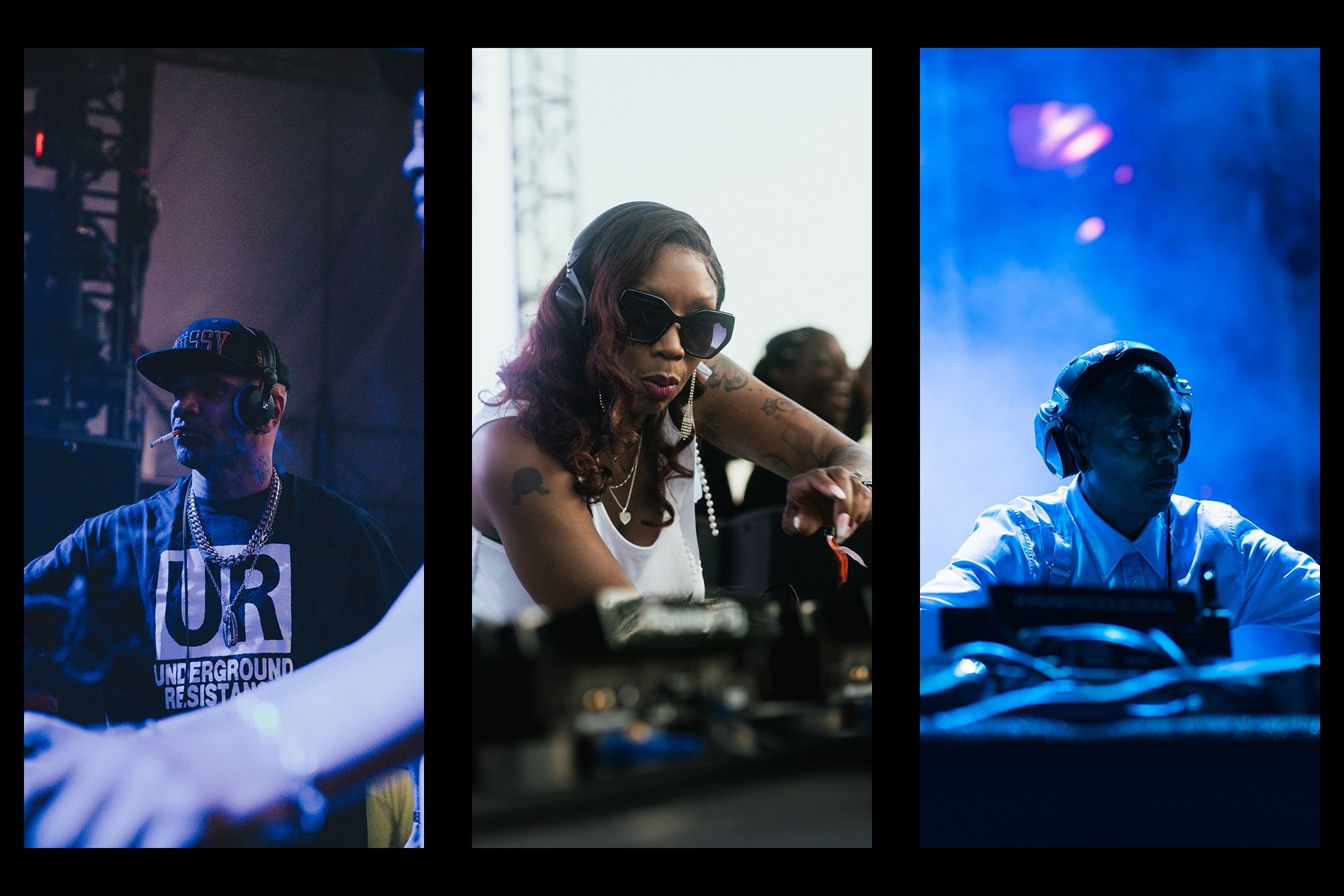 The closing day of Movement veered into more familiar ‘festival’ terrain, with big sets by Duck Sauce, GRiZ, and Flying Lotus that brought out the fractal-print T-shirt crowd. But it never lost its local flavor, especially on the Detroit stage, where artists like Francois Dillinger and Deon Jamar represented what seems to be a return to the city’s icy electro roots. On the Pyramid stage, Detroit mainstay DJ Minx, one of only a handful of Black women on the weekend’s line-up alongside, hosted one of the festival’s most raucous blocks of programming, bringing the off-the-chain energy the city’s clubs are famous for out into the open air. Even LTJ Bukem and Goldie (who wore an Underground Resistance tee onstage) paid tribute to the city by ending their B2B set of arena-sized drum ‘n’ bass bangers with a detour into classic techno.

Read this next: Listen to DJ Minx's 100% Detroit mix

But the night, and the crowd, belonged to Jeff Mills. Taking the main stage in a crisp shirt buttoned to the collar despite the summery heat, he crafted a masterful marathon two-and-a-half hour headlining set, meticulously arranging a palette of vintage drum and synth sounds into wave after wave of shimmering techno that lived up to his nom de beat The Wizard. Dance music is by nature manipulative, and over the course of his set Mills played the crowd as much as he did the bank of gear surrounding him on stage, building up the tension again and again, but denying us the release we craved. Finally, as the festival’s 11:PM end time approached, he let go, punching in flurries of drum rolls and ecstatic waves of synths that pushed the crowd—many of us physically exhausted after three straight days of dancing—into a frenzy. Eleven o’clock came and went and Mills kept going. After a stage staffer shuffled up to him twice, obviously letting him know he’d blown through curfew, he finally let loose one last barrage of snares, then stopped dead, the silence deafening, the massive crowd begging for more.