This isn’t so much a new era for Chloé Robinson as an evolution. Previously known as Barely Legal, Chloé has been DJing for upwards of 10 years. Known for spinning all varieties of bass music, from grime to garage to dubstep, she has since moved towards playing more techno and house in her sets. Having built up a reputation as a solid selector and sterling DJ, Chloé is kicking off this period of evolution with her first foray into production.

Read this next: Low-end inspiration: Flava D is at the forefront of bass music

As much as the name change might appear to be cleverly planned to coincide with her introduction to the world as a producer, Chloé says it’s in fact something that she’s wanted for a very long time but couldn’t find the right way to do it. Her manager suggested it tentatively over lockdown. “I think he was a bit worried that I would kick off or not be keen on the idea,” she says. “But I wanted to change my name since I started. I think I did try and change it maybe about seven years ago, but it didn’t work. It’s always a bit daunting because it’s sort of like, will promoters still want to book you? They might be a bit wary as to whether you’re going to bring your following with your name, which is why I went for my actual name because I feel like a lot of people know me by that anyway.” She pauses and continues, “it just felt like the best way to do it rather than come up with some random name or rebrand. It’s not necessarily a rebrand, it’s still me, still playing what I like, but what I like now is very different to what I liked 10 years ago.” She’s hoping that this new name will allow her to be put onto line-ups that better suit the techno sound she’s playing out now rather than the bass sound she came up playing.

Chloé’s new tracks reflect who she’s become as a DJ over the past few years. Still heavily influenced by bass music, the sound showcases a style of techno that isn’t afraid to take itself a little less seriously. Characterised by heavy beats and peppered with snippets of eclectic samples—from grime vocals to telephone rings—Chloé’s productions with DJ ADHD promise freedom and release. ‘Casper’ features ghostly sound effects that whoosh from left to right, adding humour to the track’s very serious techno rhythm. ‘Titch’ builds and builds, the syncopated hi-hats becoming even more frantic before breaking into a bassy, grime-inspired motif. Fast-paced and thumping, tracks like ‘Kwik Fit’ and ‘Steamin’ stitch together sample sounds very subtly, jumping from one to the next before stitching them both together masterfully. They sound, really, like two mates having fun producing things that they buzz off. 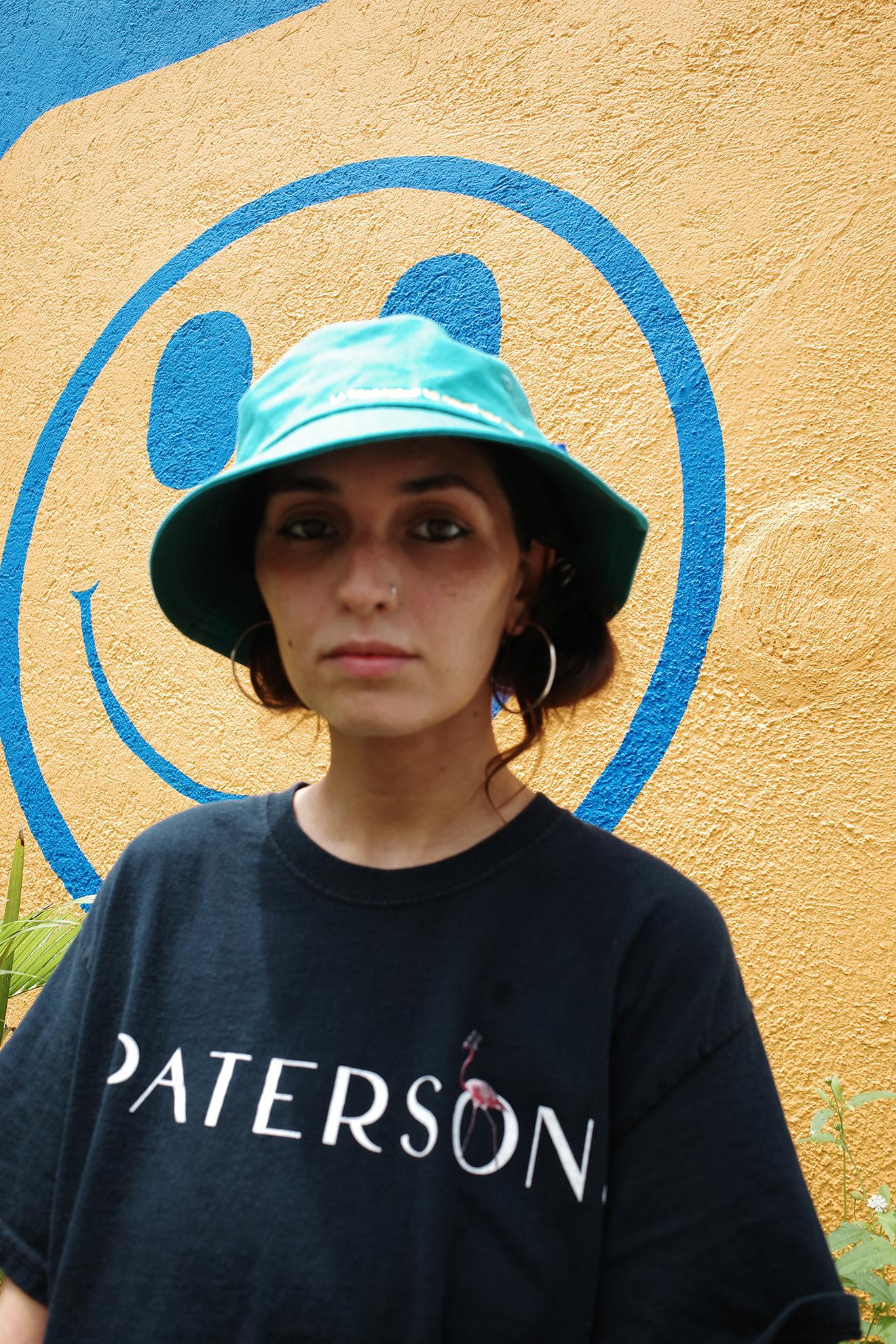 Though a proficient DJ, several things have put her off from learning production over the years. “I’ve got lots of friends who are producers and I really respect the art of production. That was why I delayed the process of producing for so long: because I see how much time and skill goes into it, and I didn’t want to jump into that world.” On top of that, Chloé points out that being a woman in the music industry often comes with a lot of second guessing yourself. “Before, I felt a bit scared about producing as a woman because there’s just so much sexism, isn’t there? If you look at all the stuff that Peggy Gou gets, like all that stuff recently about whether she makes her own tracks, it just put me off.” Chloé is no stranger to that sort of sexist online abuse and speculation: “I was put off doing livestreams for a year after I did a Mixmag Lab where I received super bad sexism because I was wearing a crop top.” But something clicked in the past year. “I suddenly had this confidence with the sounds in my head, and I felt like I had enough support around me. I felt ready and didn’t feel scared. Now, I finally feel confident and ready to be honest about whatever I’m doing in my process. If people want to talk and say shit, they will, and I’m not going to let it stop me from doing stuff like this.”

She decided to take the leap into producing when the Arts Council England grant for Developing your Creative Practice finally opened up to DJs earlier this year. With a letter of recommendation from Kieran Hebden aka Four Tet, who’s been a huge source of professional support for Chloé since around 2013 and recently tweeted "the best new club tracks I’ve heard so far this year have been made by Chloé Robinson", she got the grant and went for it. She enlisted the help of DJ ADHD and they’ve been producing tracks collaboratively since she got the green light from the DYCP grant in June. “We haven’t really been thinking about it, we’ve just been opening up a drum machine pattern, making it and building it and not thinking about it too much. Just like, boom, that’s another. But I’m really happy with them.” She says the production process really is 50-50. “He’s not very patient going through samples, but I love listening for samples. I’ll go through and sit there for an hour and listen to different sounds, then we’ll go through them together. He’s really quick at structuring things and the technical side of things. But at the end of the day, it becomes one piece of work.”

After years of DJing, Chloé says it wasn’t a difficult process to discover the sorts of sounds she wanted to produce. With lots of time on her hands in lockdown, she passed her days YouTube crate digging, just typing in a vaguely obscure track that she liked, tracking down the playlists that it had been added to, then combing those playlists for other tunes that suited what she was after. “There’s loads of headsy, neeky music people out there who love putting together YouTube playlists,” she laughs. It was a fruitful process; after rigorously going through the playlist that she herself had compiled from her adventures in YouTube land, she noticed a pattern. “Everything I liked seemed to be this very simple drum pattern techno. I don’t like melodies or chords and I’m very picky and fussy. I like things stripped down, and things that are a bit weird and a bit fucked up. I don’t like things that are a bit safe and too repetitive. That sound is obviously what some people find really comforting in techno and they can listen to four-by-four techno for like eight hours, but I prefer it when the tunes have some fucked up shit in them which throw people off at parts.” 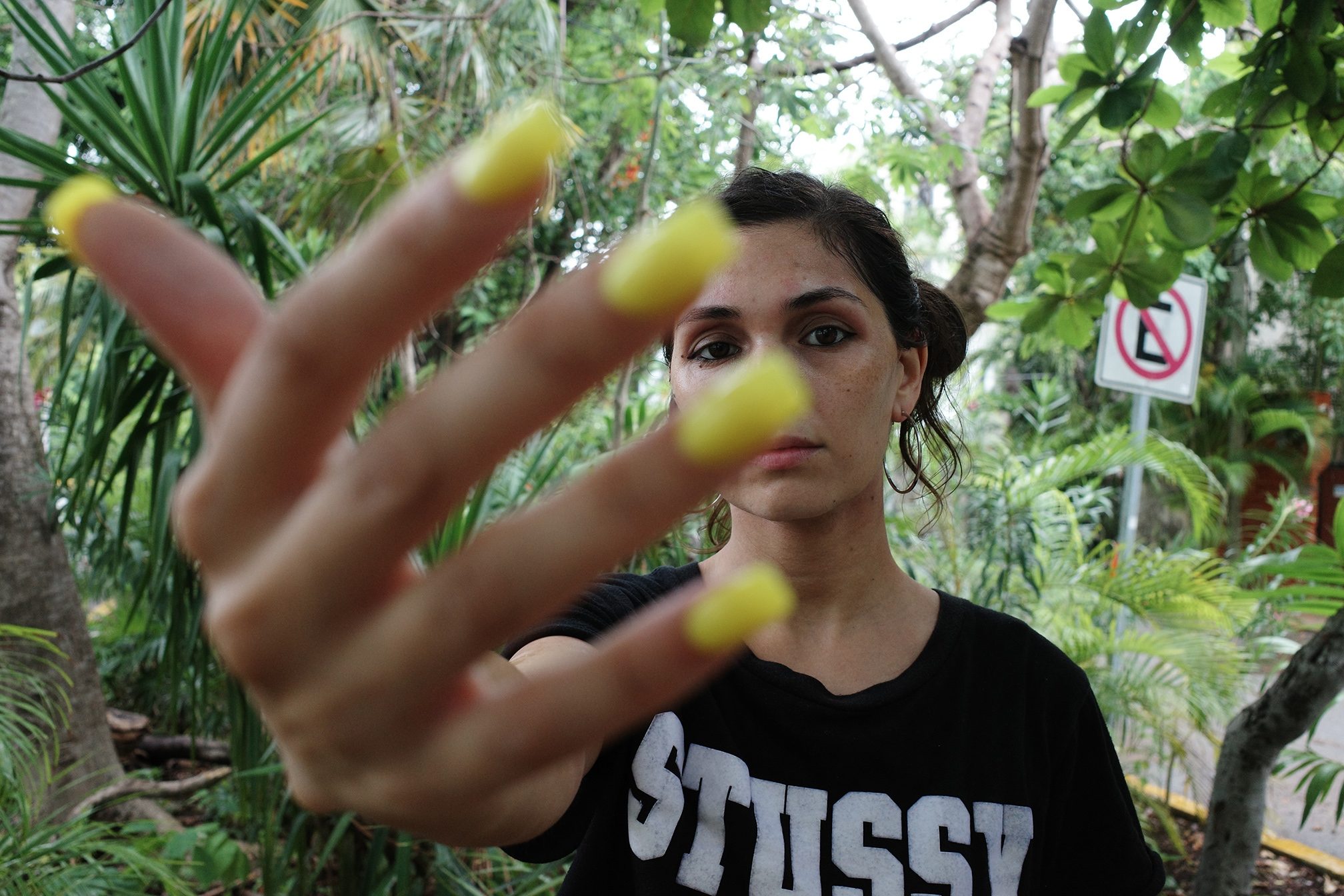 Although lockdown presented the perfect opportunity to dive headfirst into defining her own sound for herself, it was a challenge for Chloé. “Lockdown was a bit much for me because it was everything that I hate. I had to force myself to do all the content that I don’t really enjoy, like mixes aren’t my favourite thing to do in the world and I hate doing livestreams. What I love is going out and playing to people.” She was also dealing with several worsening situations in her personal life; as a winter lockdown began looking more and more likely in the UK, Chloé’s living situation became expensive and unstable, and she found herself in a bad headspace. So, she booked a ticket to Mexico at the start of October. “I didn’t really say bye to anyone,” she says. “I told a few people, but I didn’t want to worry anyone. I wanted to escape and not be a burden.” She backpedals a bit, justifying herself as she speaks: “I know that you’re not a burden when you’re in a bad headspace, but I just didn’t really want to be around anybody.”

She flew to Tulum, and then when that became a popular site for pandemic raves, she moved an hour away. After that, her thought was: “may as well go and live in Colombia for a bit.” Cos why not? The lockdown conditions in Medellin, where she eventually ended up, were difficult, with a strict curfew imposed over the weekend and from 5:PM to 7:AM the next morning during the week. Though intense, Chloé treated it as time out rather than an extended holiday. “I just wanted to be existing somewhere. I felt really privileged to have this time. And I feel like I remained relatively calm. In the UK I was stressing so much about stuff that was out of my control. I just slowed down and enjoyed the privilege of not having anything to do.”

Read this next: Reclaiming Medellín from gang rule has transformed the Colombian city's music scene

The time away seems to have given Chloé a renewed sense of self-assurance, a deep embedded knowledge that whatever she chooses to do in music, she has enough of a professional support system that she’ll weather the changes. This translates to her approach to the label arm of her nightlife brand Pretty Weird, which she’s building up gradually with a more regular release schedule and plans for roster parties: her next solo release on the label will be from DJ ADHD himself, and she hints that her previous artist release Nikki Nair and DJ ADHD have linked up for a collaboration. In terms of progressing Pretty Weird, Chloé says, “I haven’t really got a strict ethos for it. I’d quite like to keep finding new names. It’s a bit more exciting like that, so I’m going to keep going through my promos and I think I’ll come across some magic at some point.”

Fluidity seems to be Chloé’s way of proceeding in this new stage of her career. I ask what lessons she’ll be taking forward into the Chloé Robinson era from the Barely Legal era, and she issues the two main edicts of this new mature stage: “Keep it fun—not too serious—and don’t have any rules.” Simple, easy to remember, and perfectly sums up the Chloé Robinson approach to life. Whether it’s spending lockdown in Medellin or spicing up the house and techno world with a healthy bit of garage sprinkled into her sets, she’s clearly not afraid to follow her instincts. The difference is that now, a decade into her career, there's a big crowd hypd to follow her lead.