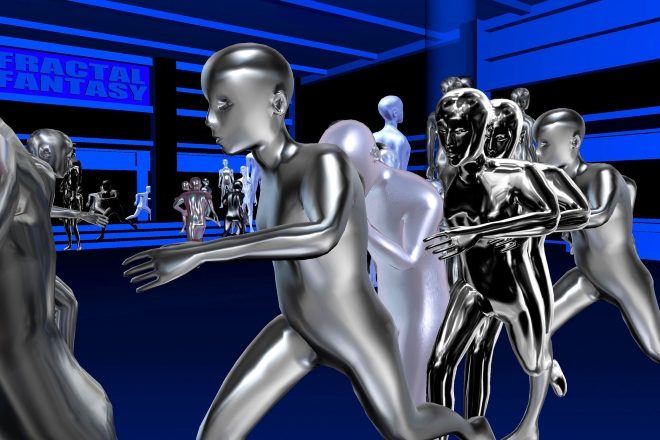 Audiovisual platform Fractal Fantasy has launched a new project, inviting people from all over the world to join its virtual club simulator.

The new metaverse was launched yesterday on July 21 and is now live and accessible 24/7 giving users the chance to experience a club while the world continues to lockdown.

Said to be capable of ‘hosting virtual events and live performances, the virtual world can be experienced on any device at the click of a link. Once in, clubbers can enjoy the dystopian metaverse alongside friends and strangers.

Read this next: Virtual Raving: a short film by Mixmag

The club can be joined worldwide, and with some galactic avatars roaming the space, it feels like a far distant future from the clubbing we remember.

As it stands, the club simulator features just one room but includes artwork and projections, a DJ booth, sound system, lockers and a vending machine.

Users can give themselves a username and chat on the dancefloor, catch mushrooms and dance to gain points. Supposedly, the first to gain 1000 points wins.

Fractal Fantasy was launched by Sinjin Hawke and Zora Jones and features art from Nicolas Sassoon and øøøø.

The club’s soundtrack comes from the likes of Zubotnik, Martyn Bootyspoon, Xzavier Stone, Hawke, and the founder of Fractal Fantasy, Zora Jones.

Click here to join the club simulator and dance with strangers from across the globe.