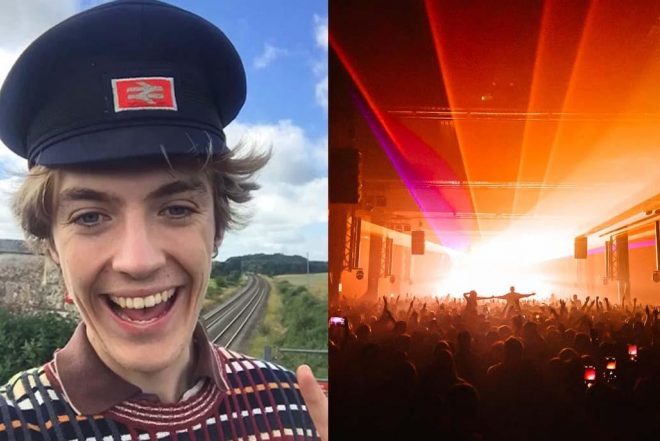 In a TikTok video posted by Francis, he said: "This used to be a Royal Mail sorting office, now it's an awesome club called The Warehouse Project".

According to MEN, it was designed as a suburban train terminal and inaugurated in August 1910 by the London and North Western Railway Company. During World War II, it was attacked and destroyed in December 1940. However, it remained available to passengers until August 1960.

In 2019, Depot Mayfield launched with Manchester Pride Live and has become home to The Warehouse Project and Escape to Freight island.

In his TikTok video Francis wears his iconic headgear with his camera on, which he uses when he posts trainspotting videos online, and dances around the club.

Francis is well known for making and posting videos about trains. He frequently stands on the side of train tracks and comments on the models and types of trains that he sees as they go past.

Read this next: Welcome to the Warehouse: 10 sets that rocked WHP opening

In a TikTok video posted by the Warehouse Project, the event claimed that "he had fun".

@thewarehouseproject Tones, trains and techno - thanks for coming down @francis.bourgeois ! #train #whp #trainspotting ♬ Do It To It - ACRAZE

Francis also said on his Instagram: "I feel like there's a lot of connection between my passion for trains and my love for music, especially electronic music, with industrial sounds similar to big diesel engines and clickity clackity of the rails!"

His presence at the venue was well adored by fans, some of which posted videos of him dancing with captions such as "trains and techno".

In a post on Twitter Sacha Lord, Co-founder of the Warehouse Project, said: We’ve had some A listers attend ⁦@WHP_Mcr over the years…but we’ve never seen such a commotion as when Francis Bourgeois turned up this weekend."

Francis seems to be popular amongst DJs too. salute recently tweeted out: "met the train guy from tiktok holy shit".

According to salute, Francis has "more aphex twin knowledge than anyone [he's] ever met".

Read this next: Swing Ting: "Manchester is different, we don't ever try to copy people"