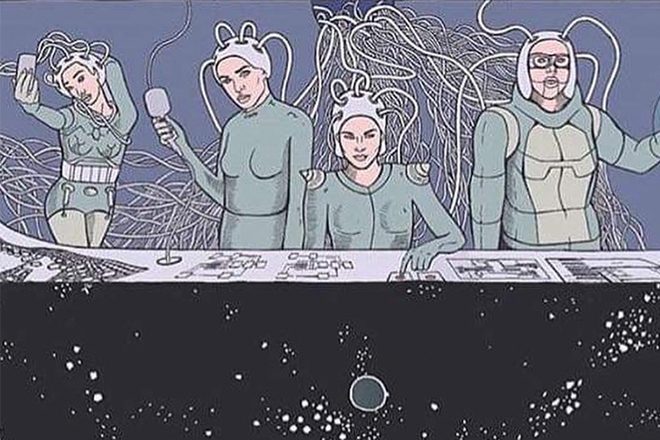 The release's illustration shows the four DJs with wires attached to their heads while riding the phallic spaceship. When sharing the artwork, Vakula wrote on Instagram: "I dedicated this project to my beloved women, where we tried to portray the most beautiful dick that those girls on the cover could ever meet." Vakula made his Instagram private following the post.

He announced the EP on March 1 and word of the artwork spread slowly through the various clubland channels before reaching two of the DJs depicted in the illustration. None of the artists depicted were contacted for approval for the usage of their likeness.

The Black Madonna took to Twitter today to express her absolute disdain for the stunt.

Nastia took to Instagram to write a long post explaining how the Ukrainian artist had already once confronted her with his misogynistic views, saying that she was "shitty and not even a DJ" but that he would be happy to teach her. In the post, she continued to say that "his problem is that he can't handle our success".

Post in purpose ) Our Ukrainian artist Vakula has announced his next release with me, @ninakraviz , @blackmadonnachi and Peggy Gou on the cover with the next description: “I dedicated this project to my beloved women, where we tried to depict the most beautiful dick that those girls depicted on the cover could ever meet. Find in stores, do not miss”. Well.. Sigmund Freud would be satisfied. I believe it’s that kind of a dick he dreams about! Let’s say when I met him in 2015 he seriously told me I am shity and not even a DJ, but if we come together he can teach me.. The biggest lol I have seen for a while. I always knew he is such an arrogant and lost sexist + simply idiot who believes he is one and only artist comparing himself with Theo Parrish, but I didn’t expect he will go that far.. His most problem is that he can’t handle our success Can’t tag him here because he banned me last year just because he didn’t want me to see his page )) Gonna go to the store and get my copy! Good advertisement tho! This is worthy a promotion for free in my feed 🤪 #vakula #cover #nastia #ninakraviz #blackmadonna #peggygou #sexism #hate #lol

Vakula commented under Nastia's post trying to explain the concept behind the artwork. "My vision was to call attention to the exploitative nature of the music industry", he wrote. "It was not done with any disrespect. I hold the vision of the music industry becoming focused on fame, money not music and it makes me sad to see it go this way."

Following the backlash and response instigated from Nastia's post, Vakula shared news that he will amend the EP's artwork "out of respect" for the artists.

Nina Kraviz and Peggy Gou have yet to make comment.