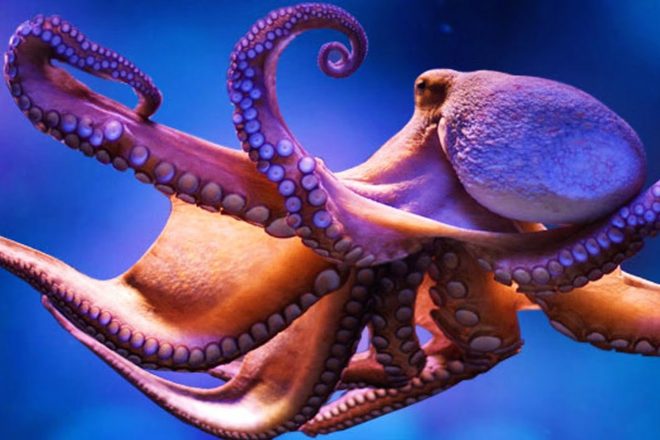 A new study has found that serotonin is the key to social behavior after scientists gave MDMA to octopuses and observed their interactions, according to The Guardian.

Octopuses are typically antisocial and treat each other with aggression. They've also been known to eat each other in hostile situations. That said, after a dose of MDMA, scientists found that octopuses become more "touchy-feely" and their antisocial behavior seemingly disappears once serotonin floods the brain, which is increased by ingesting MDMA.

Conducted by lead investigator Gül Dölen, a neuroscientist at the Johns Hopkins University School of Medicine, the study was published in the journal Current Biology. Scientists chose to use octopuses for the experiment as humans are separated by more than 500 million years of evolution with them and the goal was to uncovering the ancient origins of social behavior.

Dölen received some typical lighthearted responses from people asking about the experiment: “People are like, ‘Have you got any pictures of octopuses holding glow sticks?’ which I kind of ignore because that wasn’t really our objective. MDMA is a great tool for investigating whether or not an octopus can become social.”

Throughout the experiment, scientists observed the behavior of octopuses in tanks that featured three chambers. One chamber was empty, one chamber had a plastic toy and the last chamber had another octopus in a cage.

There were four octopuses that were used in the study and each was placed in a water diluted with MDMA as the octopuses absorbed the drug through their gills. The results were clear, as the octopuses preferred to spend more time in the cage that contained another octopuses than it did when it was not on MDMA. Without the drug, octopuses approached the cage carefully with one tentacle stretched out, but when on MDMA the octopuses behaved much different.

The study showed that octopuses exhibited more friendly behavior when on MDMA, as Dölen described: “They’re basically hugging the [cage] and exposing parts of their body that they don’t normally expose to another octopus... Some were being very playful, doing water acrobatics or spent time fondling the airstone [aquarium bubbler]."

A neuropsychopharmacologist at Imperial College London named Professor David Nutt said the results of this study also provide more evidence that a wide range of species experience emotion and empathy: “This just proves that this is not some peculiar human characteristic, it’s not even a mammalian characteristic, it’s a characteristic of brains... It also shows that serotonin has a hugely important role in mediating social interactions right across species.”