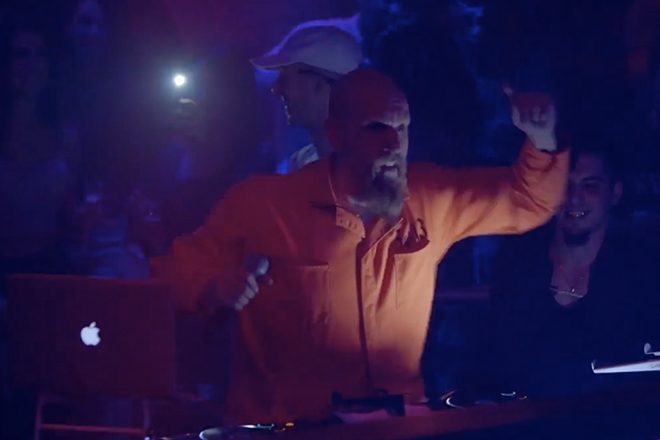 Sacha Baron Cohen has taken on club and EDM culture in the latest episode of his new politically charged Showtime series, Who Is America. In the segment, Cohen plays Ricky Sherman (aka DJ Solitary), a bald and off-putting ex-convict who is trying to take his experience from prison and turn it into art.

Using samples that he recorded during his time behind bars, Sherman creates EDM inspired tracks by cutting together the sounds of toilets flushing, exaggerated sex noises, the metallic smash of lunch trays and people being stabbed. He travels to Heart Nightclub in Miami to link up a club promoter named Jake Inphamous to see if he has what it takes to make it as a producer and DJ. Inphamous is immediately impressed and even goes as far to call one of his tracks "a masterpiece" which has a real "UK style." The promoter promises to support his musical endeavors and subsequently books him a gig at Sway nightclub in Ft. Lauderdale, Florida.

Stepping up to the decks in an orange prison jumpsuit, DJ Solitary plays out his raw and disturbing tracks to a glitzy and utterly confused nightclub crowd, many of whom continue to shake and bounce through the cacophony of sounds coming from the sound system. Before playing his tracks, Sherman/Cohen picks up the microphone and shouts, "Let's hear it for all those murderers who [are] locked up because of crimes they committed! If you believe we should stop shaming murderers, say yeah!" Of course, the shoutout was followed by a rousing response of "yeah" from the audience.

Check out the segment below.

Later today, the Scottish super-producer Hudson Mohawke revealed via Twitter that he was in fact responsible for creating the grating "troll track" that was used in the episode. Check out his tweet below.