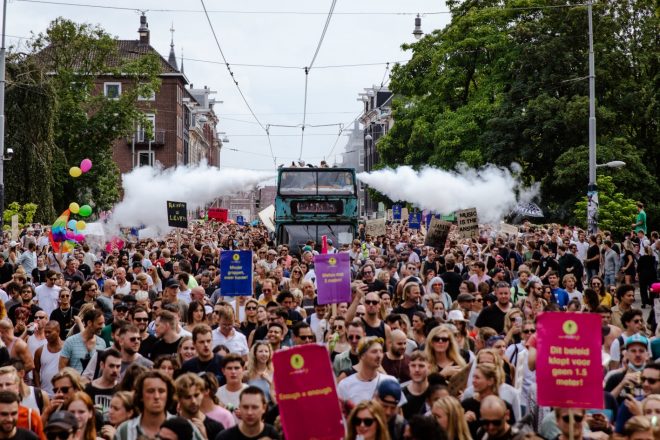 On Saturday, thousands of people gathered in cities across the Netherlands to demand the return of music festivals.

The 'Unmute Us' protests took place in response to the Dutch government’s ban of large-scale events until at least October 31, which was announced last week. The move was prompted by fears over the spread of the delta variant, which is proving highly infectious.

In the meantime, one-day events with a maximum capacity of 750 are permitted in the Netherlands, under the condition that partygoers provide proof of vaccination, a recent negative test or having recovered from COVID-19 in the past sixth months.

Congregating in six Dutch cities including Amsterdam, Eindhoven and Rotterdam, protesters marched and danced alongside trucks carrying live DJs and soundsystems. Attendees reported that the demonstrations themselves resembled a festival.

#UnmuteUs protest in #Amsterdam feels like a festival of its own pic.twitter.com/aYKvoTaW20

Reinier Zonneveld in Amsterdam today for the @awakenings Unmute us protest ✊ pic.twitter.com/fJi5CFcd5n

Calling for the government ban to be lifted on September 1, marchers carried signs with messages such as “fight for your right to party” and “music is the answer.”

The protests were set to take place between 2:PM and 5:PM, yet people remained on the streets well into the evening.

By mid-afternoon on the day of the protests, Amsterdam municipality appealed for no more people to join in due to crowding.

Last month, it was found that there was a 500% increase in infections after Dutch nightclubs reopened in June, whilst Verknipt Festival in Amsterdam reportedly led to 1,000 new COVID cases.