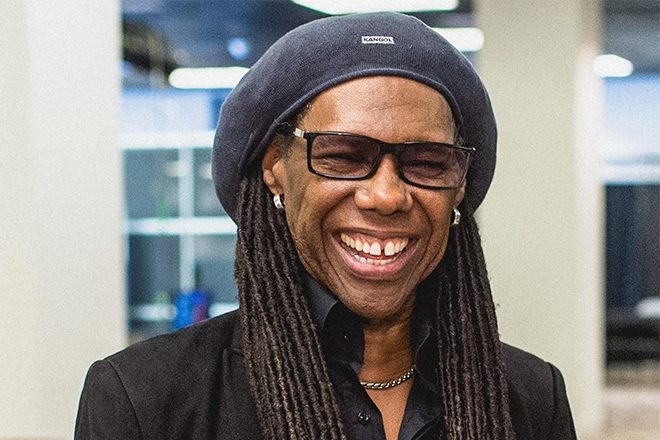 The radio appearance comes on the heels of the news that the long-awaited album project from Nile Rodgers and CHIC, aptly titled ‘It’s About Time’, is finally getting a release on September 7 via Virgin EMI. It features an eclectic range of collaborators, including Californian rapper Anderson .Paak, Craig David, Stefflon Don and Roc Nation’s Vic Mensa.

Over the course of the two-hour chat, Rodgers pulls out numerous jaw-dropping stories about his time working with titans of the music industry. One of these stories involves his time making music with Madonna, an artist who Rodgers refers to as “the hardest working person I’ve ever worked with in my life.”

He goes into detail regarding a studio session where they were supposed to record the hit track ‘Material Girl’, telling Wilkinson: “We were at the height of our drug usage and the band didn’t quite show up and I was the only one there. She asked ‘where is everybody’ and I had to pretend like we were not getting high, so I said 'Jesus! Put out a police bulletin maybe they got in an accident.’ She responded with, ‘time is money and money is mine. You’re Nile Rodgers, so hop on the keyboards.’ So yeah… that's me on the keyboards in that track.”

Having famously collaborated with French electronic duo Daft Punk for their album ‘Random Access Memories’ in helping to craft the album hit ‘Get Lucky’, Rodgers goes into detail regarding his close relationship with Daft Punk. “When I first met them it was at a release party for their album ‘Da Funk’. They were both telling me how often they use Chic samples in their records and that their album ‘Da Funk’ was a quite homage and tribute to my partner Bernard Edwards. We tried to subsequently link up and make records together.”

Rodgers goes on to tell the story of how they linked up to create ‘Random Access Memories’, telling Wilkinson “They called me up and they said ‘Man we’d love to come over and play some demos for you, we have an idea for a new album’ and they came to my apartment and I have absolutely no independent memory of whether they even played the demos or not, all they did was tell me the concept. They said ‘We want to make the album as if the internet never existed’ and I was going ‘Dude, I’m down.’”

Rodgers also informs Wilkinson that his success with the Daft Punk track ‘Get Lucky’ often causes some confusion amongst fans. “It's funny because a lot of young kids who don’t know Daft Punk prior to that (Random Access Memories) think that Pharell and I are Daft Punk and that the robots are some props. It happens all the time, people come up to me and say ‘Oh look, its Daft Punk!’”

Check out the incredible two-hour discussion on Apple Beats 1 Radio by going here.