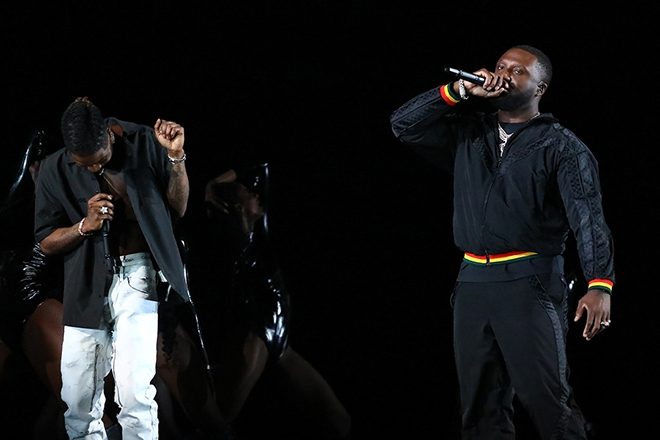 Headie One performed at The Brit Awards on Tuesday, where he made comments on societal stereotype’s around UK drill, and gave ardent political remarks about the government.

Joined by AJ Tracey, the pair performed their track ‘Aint It Different’ against a backdrop of newspaper clippings in the colours of the Ghanaian flag, nodding to Headie’s heritage.

Read this next:"We own the ball now": How UK producers set a new standard for drill

“Two Black brits stand here at the Brits but still we ain’t seen as British”, Headie sings. He goes on to praise the key workers who have aided the UK throughout the pandemic, “teamwork keeps the dream working. It’s only right we show love to the key workers."

The Brit Awards were able to go ahead on Tuesday despite restrictions in the UK not allowing for indoor live performances as of yet. No masks or social distancing was required, but a negative test had to be provided by attendees who comprised entirely of key workers. 4,000 people attended the event at The O2 Arena this week.

The pair changed the lyrics to their track, with statements on the misconstrued beliefs around UK drill, dubbing it "a form of aggressive rap music.” Headie also commented on Marcus Rashford’s blueprint for free school meals: “The government is saying eat out to help out but won’t help out Rashford when he’s feeding the youths.”

DJ and designer Virgil Abloh designed the set for one part of the pair’s performance where they can be seen inside a box, lit up by LEDs.

The performance follows a politically charged show at the Brit Awards from Dave last year, who made remarks about the media’s treatment of Meghan Markle and Grenfell Tower, and labelled Boris Johnson a “real racist."

Watch the performance from Headie One and AJ Tracey below.