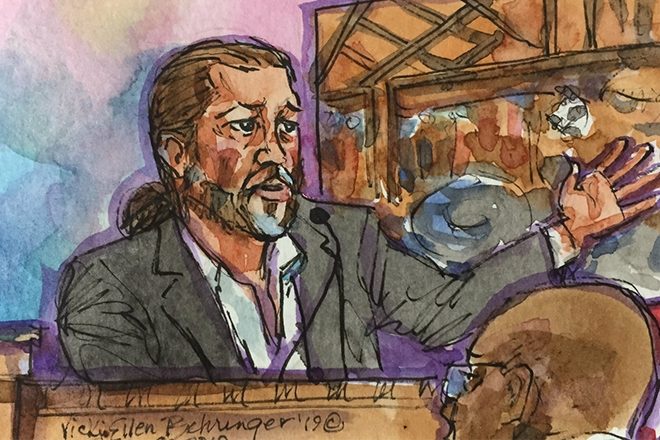 Derick Almena, one of the suspects allegedly responsible for the deadly and tragic Ghost Ship warehouse fire that killed 36 people in 2016, delivered his testimony in court on Monday, July 8.

Almena, 49, faces 36 counts of involuntary manslaughter along with co-defendant Max Harris, 29. If convicted of all charges, both men could face up to 36 years in prison, respectively.

Both defendants, who were arrested back in June of 2017, pleaded no contest to 36 counts of manslaughter last summer. Later, they were sentenced to nine and six years in prison respectively, but Judge James Crame rejected the deal due to the lack of remorse shown by Almena. The judge also noted that Almena previously failed to show any signs of remorse.

During his most recent testimony, Almena appeared in front of the court dressed in black while looking forlorn and teary-eyed.

"I built something. I dreamed something, I invited, I attracted beautiful people into my space, and I'm responsible for having this idea," Almena said. His attorney Tony Serra asked if he felt remorse. "I couldn't put into words how I feel," Almena said, adding. "I feel death."

He went on to tell the families of the victims that he was "guilty for believing we were safe" and said he should have died in the fire. Almena lived in the warehouse with his wife and three children - all of whom were staying at a hotel the night of the fire - and considered his live-work space to be a place that gives back to Oakland's artist community.

Making a major claim in his defense, Almena says that he counted 33 occasions where government officials (including firefighters, officers, CPS employees, teachers, paramedics) toured or inspected the warehouse prior to fire - a total of 50 individuals. He also went on to defend the first floor layout of his space, claiming it was not the "maze" that prosocuters are making it out to be.

Animated and rambling about clashes with the landlord, Almena claimed that his landlord tricked him into his lease after learning the building was not up to code and did not have sufficient water or electricity. When asked about his art, he was excited to show the court some examples of his photography.

Grace Lovio, whose partner Jason McCarty died in the fire, said she found Almena's testimony to be "performative" and was upset that Almena's attorney decided to show jurors his art. "My partner Jason was an extremely talented artist," she said. "We don't see his art up there."

Alameda County DA's court documents outline why Almena was arrested, saying: “Almena substantially increased the risk to those living, working or visiting the building by storing enormous amounts of flammable material inside the warehouse. Residents reported that if they put anything in their individual living spaces that did not conform to Almena’s idea as to how the warehouse should look, he would order it to be removed.”

Chor Ng, the owner of the Ghost Ship warehouse, has not been charged, has not spoken about the fire and received $3.1 million in an insurance payout back in 2017.