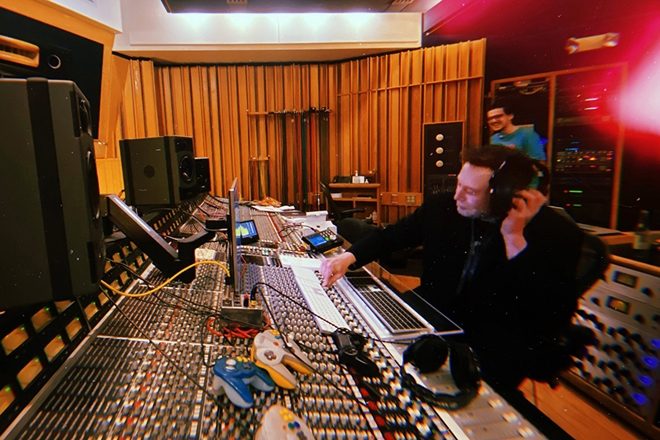 The 10-track LP is titled 'Technoking' and it will be sold as an NFT before hitting streaming platforms at the end of this week.

Musk has been working on the album since he dropped 'Don't Doubt ur Vibe' on SoundCloud two years ago. At one point the Tesla and SpaceX main man had over 100 deep house tracks ready to go but decided to finish a techno project after demoing tracks to his son X AE A-Xii.

Read this next: Elon Musk wants to stream music into your head

Musk's followers will have clocked that 'Technoking' is named after his new job title over at Tesla. Speaking exclusively to Mixmag, Musk told us that "that whole job title change was all just guerrilla marketing for the album. Everyone knows I'm the boss at Tesla so why not use what I call myself at work to promote my true passions – making fire productions and banging techno music!"

Musk will first sell 'Technoking' as an NFT via his DogeBay crypto auction site, with bidders expected to turn their hard-earned cash into Dogecoin in order to get their hands on a one-of-a-kind copy of the tech entrepreneur's debut album. The NFT will include exclusive album art, bonus tracks, a commentary by Musk, Grimes and X AE A-Xii and a personalised video message from Musk himself.

The DogeBay auction will take place tonight and Musk's management have confirmed that the album will hit streaming sites by the end of the week.

Read this next: Elon Musk is making music

While artwork will remain exclusive to the NFT package, a tracklist has been published and it reveals the album's collaborators, musical direction and has plenty of Easter eggs for dedicated Musk fans (or Muskateers as he calls his loyal fanbase).

As you'd expect, there are plenty of dad jokes, insider references and meme gags. "I couldn't resist," Musk tells Mixmag. "Some people think my music is a joke, so I thought I'd string them along with the tracklist. But when they hear the music, they'll know I'm deadly serious."

"Actually, the Aphex Twin thing is pretty serious too. I reached out to collab but our diaries didn't align. We got to talking about workout routines and that dude can bench some serious weight! If we got in the ring ticket sales would go to the moon!", Musk added.

Read this next: Elon Musk has been made 'Technoking of Tesla'

Musk's breakout SoundCloud upload 'Don't Doubt ur Vibe' is included on the album as well as a homage to UK producer Tessela called 'Silicon Valley Parrot'. "I discovered him when I made a typo Googling my own company," Musk says. "I thought it would be cool to include a bit of breakbeat science on the record".

Collaborations come from Snoop Dogg – who will change his name to Snoop Doge for the rest of 2021 to help promote the album – as well as Musk's son X AE A-Xii on 'The Unknown Variable', with the title referencing part of X AE A-Xii's name. The track features a patch that the young artist recently made on his mother's keyboard.

Perhaps the biggest collab features Musk's close friends Kanye West and Twitter boss Jack Dorsey. "The boys are always hanging in my man cave, we drink a couple Buds, shoot pool and mess around with my analogue equipment and field recordings I've made at the SpaceX labs," Musk revealed. "Jack's a tech disrupter who's moving into music just like me, and Kanye's always down to try new things. Our WhatsApp group is called The Three Muskateers. Making a track was a no-brainer."

Read this next: Grimes and Elon Musk's baby is making "super fire" music

Mixmag has heard 30 second clips of each track on 'Technoking' and the record is as uncompromising as Musk suggests. Perhaps the only cheeky wink is 'Must Be The Reason (Why I'm King Of Mars)', a techno refix of the Wamdue Project classic that features additional production from Chris Brann. "I've got a deep knowledge of music," Musk said, "and I wanted to shout out a track that soundtracked the glory days of my youth."

Read this next: Grimes "Children need to get into raving"