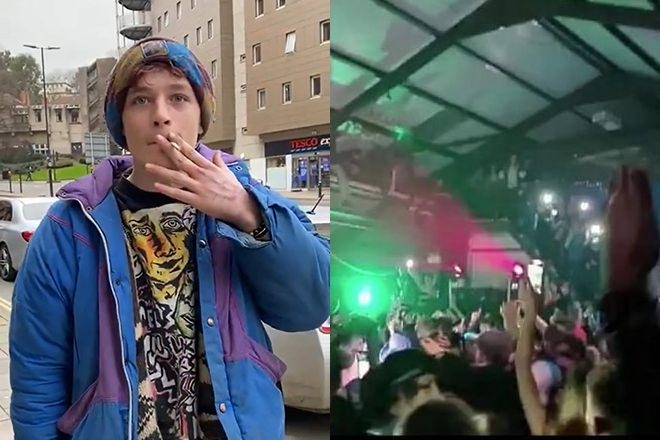 18-year-old George Parsons attended the illegal rave at a warehouse in Yate, near Bristol, which attracted an estimated 700 people with violence breaking out when police arrived onto the scene. One woman was hospitalised after being attacked by a police dog.

Here’s a conversation I had with a man who had just been fined over a huge illegal rave in Yate.

People breaking lockdown to attend raves and expressing the type of views shared by Parsons were condemned by established free party crews in a Mixmag feature last June.

They stated that while illegal rave culture has a historically anti-capitalist aspect to it, lockdown rules are not “bad laws” that are justified in being broken.

In a joint statement sent to Mixmag two established free party crews, which asked to remain anonymous, said: “We absolutely condemn anyone doing free parties during the lockdown.

“Free parties are about defying bad laws: the laws of property keep some people homeless whilst others own multiple glittering palaces that they keep empty; they kick locals out of their social spaces and deny them places to create and enjoy their own culture.

“That’s why we do squat parties - to give each other a sense of our collective power and help defy bad laws.

“However, the lockdown isn’t a ‘bad law’ – it’s not even really a law.

“In reality, the government has not enforced a proper lockdown like other countries, and the elite - like Dominic Cummings - have completely ignored it.

“It’s been the working class who have actually done their best to keep the most vulnerable safe, and free parties - as a working class cultural movement - will absolutely hold the line too.”

The nightlife industry has been similarly critical of illegal raves due to the health risk, as well harming the industry's reputation and further delaying the return of legal nightlife.

The International Nightlife Association [INA] recently called for the "maximum penalty" for pandemic party organisers, saying that they “have caused very serious damage to the image of the nightlife industry and have posed a serious public health risk.”

In court, prosecutor May Li said of Parsons’ offences: “Mr Parsons stood in front of police and refused to follow requests, which in turn fuelled others around him.

“He was forced back towards the door, resisted and refused to leave. Some of the revellers threw bottles towards the police which made contact with their shields.

“Mr Parsons was pushed back by the officers but he was seen to kick and punch the police shields.”

Parsons admitted he refused to leave but denied he was violent.

He told the court during the hearing that he has been squatting in a caravan in Bristol’s Easton area and lives “all over the shop”, but any post for him could be directed to his mum’s house in Ugborough, Devon.

He was fined £200, as well as being ordered to pay a £34 victim surcharge and £85 prosecution costs.

The UK has recorded close to 4 million coronavirus cases and more than 114,000 deaths due to the disease since the start of the pandemic.