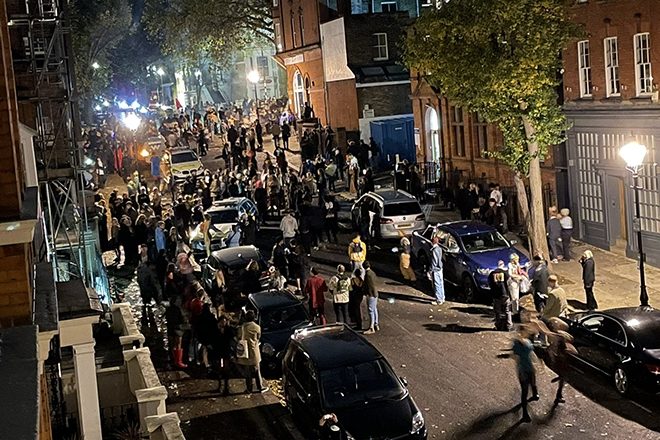 A number of illegal raves took place across England at the weekend, despite news of an impending national lockdown being announced by the prime minister Boris Johnson on Saturday evening.

At a warehouse in Yate, near Bristol, an illegal rave attracted an estimated 700 people with violence breaking out when police arrived onto the scene at around 10:30pm on Saturday night, including crowd members throwing objects at officers.

A spokesperson for Avon and Somerset Police said they "found a number of vehicles and several hundred people" at the site, and despite roads being closed to stem the flow of arrivals, “large numbers of people continued to arrive on foot from several different directions".

The spokesperson added: "Items, including lit spray cans and bottles, were thrown at police, some of whom were injured but remained on duty."

Eight people were arrested, including a man in his 30s held on suspicion of organising the event, and music equipment has been seized.

Chief Inspector Mark Runacres said it was an "incredibly challenging operation" for the police with a "large number of people in a confined space and several officers being assaulted".

He added: "This unlicensed event was organised in secret, despite people being fully aware of the ongoing risk to public health due to COVID-19.

"Their actions were wholly irresponsible and I am sure will disgust the overwhelming majority of people who are making huge sacrifices to limit the spread of the virus.

"Our investigations team will be involved in reviewing officers' body worn footage and other inquiries as we seek to take appropriate action against those responsible.”

Additional support is being provided by neighbouring forces to help deal with the ongoing incident.

So far two people have been arrested but work is ongoing to identify those responsible.

Anyone with info should call 101 and give log 1369 of 31 Oct. pic.twitter.com/VNjxPIFWAh

Around 300 people were dispersed from an illegal rave on a farm in Chesire, near Wigan, after the owner of the 320-acre site reported the unlicensed event to police at 8:45pm on Saturday.

Seven police vehicles had their tyres slashed and a machete was found in nearby bushes.

Despite police warnings, a number of people fled the site across active railway racks, according to Greater Manchester Police.

Assistant Chief Constable Rob Potts said: "This event was unacceptable and a blatant disregard of, not only restrictions for COVID-19 and the safety of others, but also the safety of those present as we saw serious examples over the summer period of the dangers posed by attending such events.

"Thankfully our officers, alongside supporting resources from Cheshire, British Transport Police, National Police Air Service and Network Rail, were able to put a swift end to the event and prevent further large numbers people attending, as well as ensuring a safe and orderly exit from the site despite the challenges posed by the surrounding terrain.

"This event was a clear and flagrant breach of the regulations in place to keep people safe and a comprehensive investigation has been launched to bring the organisers to justice.

"I would also like to reiterate our message from the summer to those thinking of attending these events and those willing to drop their children off at these illegal gatherings; while many may attend to have a good time, not everyone goes with the same intentions.

"As well as being illegal, these events are not safe and the fact a machete was recovered from the site of this event is a worrying but important reminder that this very much remains the case."

In London an illegal rave at the disused Hampstead police station attracted around 800 people on Saturday night.

“Given the context of COVID-19 this kind of behaviour is dangerous and irresponsible. An investigation has been started and any organisers identified will be prosecuted.”

The Metropolitan Police said a further 10 unlicensed music events were dealt with by its public order team across London on Halloween night.

Police Commander Ade Adelekan said: “If you think the next few days are an excuse to break the rules, think again. You will get caught, we will take action and impose the maximum sanctions.

“Not only are unlicensed music events unsafe for many reasons but they brazenly disregard the current COVID-19 restrictions.

“The majority of the public have had to make sacrifices during this time, we will not let those who think they are above the law get away with this selfish behaviour.”

Following an illegal rave in Halstead, Essex, a 24-year-old man has been left fighting for his life after falling ill at the scene. A 21-year-old woman was also hospitalised bu has since been discharged.

An Essex Police spokesperson said: "Our officers administered life-saving treatment on both people until paramedics arrived."

Police arrived at the scene at around 11:30pm on Saturday night. According to one witness, the event did not stop until 7:30am on Sunday morning.

The Essex Police spokesperson said: "Officers arrived and assessed the situation based upon the threat, harm and risk posed to participants and local residents. A decision was made to prevent further people attending and a direction given to those present to leave. Officers remained at the event to maintain public order."

Another illegal rave was reported to take place at the Brantano warehouse in Poole, where a man was hospitalised after falling from a roof inside the building and bottles were thrown at police officers.

Read this next: Illegal rave organisers face fines of up to £10000

These illegal raves took place ahead of strict national lockdown measures coming into place in England on Thursday, November 5, in the face of rapidly rising COVID-19 infections. The new measures willy apply nationally until at least Wednesday, December 2.