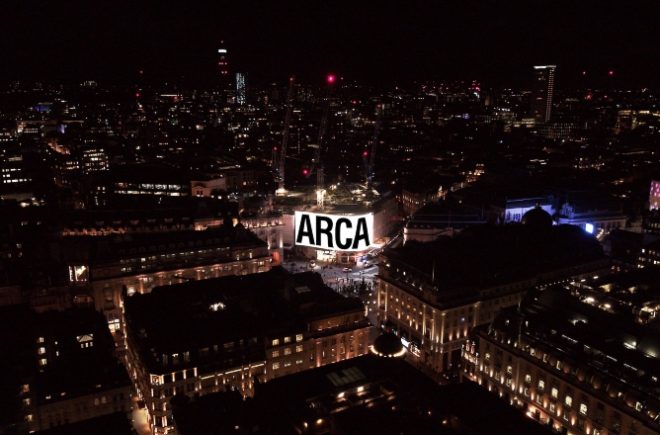 Artwork by Arca will be showcased on world-famous billboards throughout the month of January.

Titled 'Untitled', the new piece was developed with AI and blurs the barriers between art and technology, which is something the innovative musician "has been trying to achieve for a long time."

Untitled was debuted on the Piccadilly Lights in London, as well as a global network of screens in cities including New York, Los Angeles, and Seoul, on New Year's Day at 8:22PM local time.

The artwork will continue to be projected on world-famous billboards in these major cities across the month of January.

The audio-visual experience can be watched while audiences listen to an accompanying soundtrack through their headphones and mobile phone. It can also be viewed on the Circa website, with whom Arca collaborated to create the piece.

To train the algorithm for Untitled, Arca enlisted the help of Christina Anagnostou, a London-based multimedia artist and Circa class of 2021 alumna.

The project came together by using 31 of Arca's own mixed media paintings to train a neural network-powered algorithm, "allowing these material real-world artworks to transcend the physical realm."

Arca has designed five limited edition hand-signed prints to accompany with the public show, which will be available for purchase through the Circa online store.

The prints are priced between £122 and £1000, with revenues going to the platform's #CIRCAECONOMY project, which gives possibilities for rising creatives through unique commissions, scholarships, contributions, and grants.

In an Instagram caption, Arca said: "I hope you are compelled by these interpolated paintings of mine to take a moment and let the visual ASMR produce pleasure, allow for a moment of respite and solace, the experience of warped beauty to usher in the new year premiering a new artwork on view in the following locations."

In a press statement Arca said: “I hope you are compelled by these interpolated paintings of mine to take a moment and let the visual ASMR produce pleasure, allow for a moment of respite and solace, the experience of warped beauty".

In an essay published on Circa's website, it states: "Voices like Arca’s point to another future for humans beyond the physical, where the lives we live when we leave our bodies are not bound and proscribed by bland visions and shrunken desires of the tech giants CEOs".

Josef O’Connor, Artistic Director at Circa, said in a statement. “A true polymath, I am moved by her courage and honoured to present this collaboration fusing art with technology to generate new possibilities and launch the beginning of Circa 2022 – a year of world-building".

Read this next: Arca announces another new album, 'KicK iii'

Arca released volumes two through five of her KicK album series in December.