A small tin boat cruises slowly past the makeshift river beach, hours from any coastline, as its middle-aged male occupants gaze quizzically from behind sunglasses at the scene unfolding on the shore just metres away.

Breezy, soulful house filters from the bush where a couple of thousand tanned, brightly coloured and barely clothed festival-goers groove in the Australian summer sun and cool off in the welcoming water beneath towering ancient river red gum trees that warp at strange angles as they stretch high.

Sydney DJ Adi Toohey curates the afternoon session from a macramé plant hanger-adorned hut above the sand of Strawberry Fields’ Beach stage, looking especially fresh in a crisp white tee – oddly, perhaps one of the last pieces of attire you’d expect to see in the dusty surrounds of an Australian ‘bush doof’.

A yellow smiley flag dances in a light breeze against the faultless blue sky above Funktion-One stacks that cover all angles as Toohey smiles and moves behind the decks, while two jet-skis cut through the snaking brown river that splits the country’s two most populous states of Victoria and New South Wales.

Later, Jayda G slings out classic vocal house belters in the final hour of one of the sets of the festival as the sun sinks and illuminates the west-facing stage.

At the best doofs – the slang term for raves held off the beaten track in natural surrounds away from Australia’s capital cities – the line between curious locals dropping by for a look and semi-ironic inner city types embracing an ‘Australiana’ vibe can become blurred. All year, the Murray River is a playground for those whose vices centre around fishing, boating, wakeboarding and other water sports. But this weekend it’s a meeting point between two seemingly polar opposite worlds of dance kids from the city and regular regional Australia, as Strawberry Fields descends on the small town of Tocumwal, population less than 2,000, about three hours north of Melbourne, just over the New South Wales border on the way to Sydney. 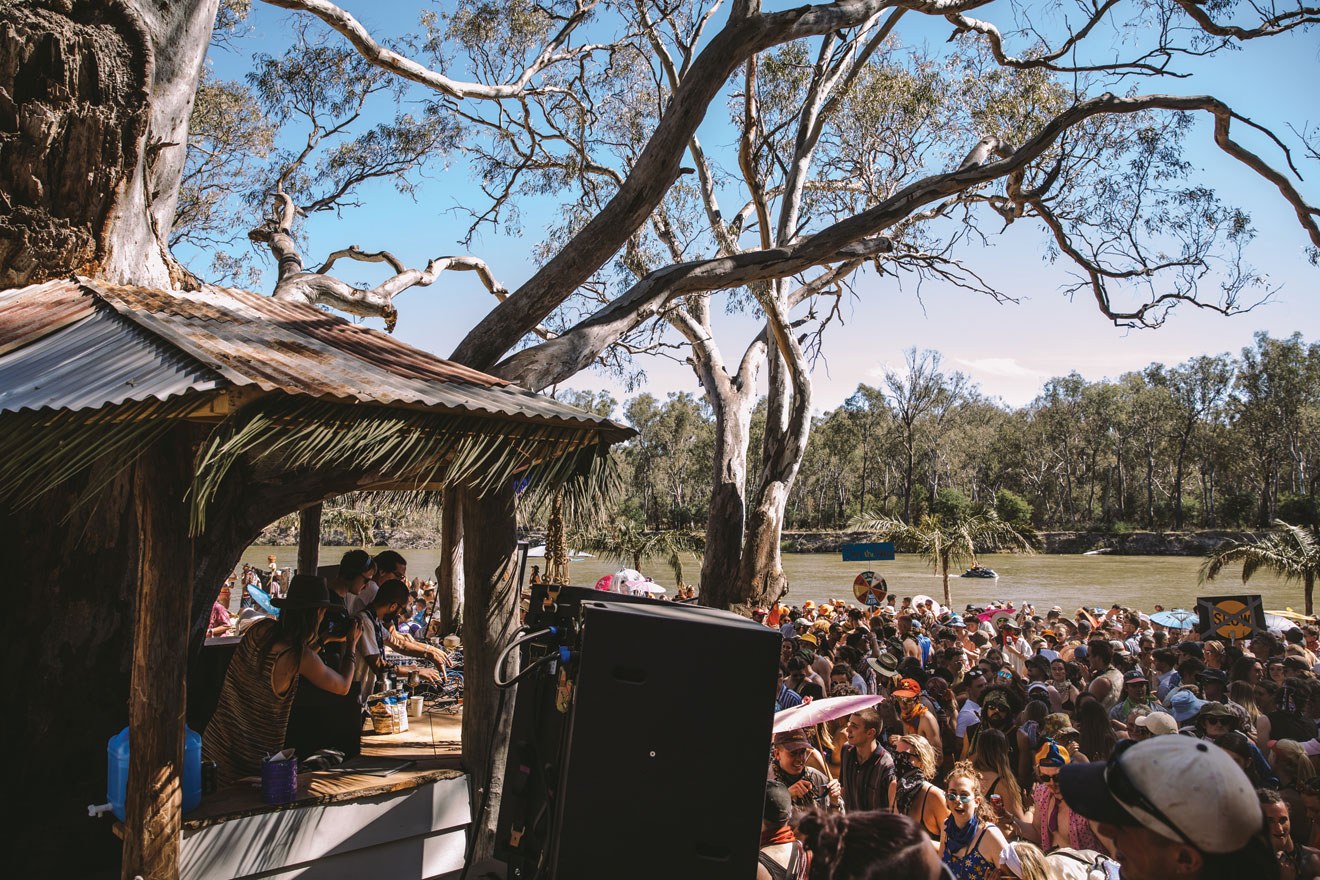 Dance music’s roots are in the world’s biggest cities, but its positive vibrations penetrate deep into the Australian bush. “I was almost going to miss my set when this local couple who were driving a shuttle service saw us waiting and stopped on their way back,” the bleached-haired, London-based Aussie expat HAAi tells Mixmag during her first trip home in three years. We’re sitting on a log for a chat after her Saturday night set, her acquired British accent starting to win out after seven years away from home.

“They were so lovely, and drove us all the way in – they just had the spirit of what this place has,” she continues. Bush doofs are a way for locals to make some extra cash as well as meet new friends at a time when rural Australia is under huge economic pressure.

Local Berrigan Shire councillor Ross Bodey – who prefers the title ‘citizen’ – says Strawberry Fields has “arguably a one million [Australian dollar] benefit” to the community, something that’s more important than ever as it’s “the beginning of what will be quite a disastrous drought”.

He explains the huge impact drought has on farmers by asking Mixmag to consider how their usual yearly salary 70–80,000 Australian dollars a year will be slashed to just $15,000. “The farmers suffer, and so the town suffers, because the farming community doesn’t spend money in a drought, they pull the purse strings in very tightly to last through – so anything that provides a benefit to the town’s businesses is quite excellent,” he says. Strawberry Fields has won the local community over in recent years with its inclusive philosophy and local grants program.

For HAAi, real name Teneil Throssell, there’s a particularly special connection, coming as she does from the remote far north Western Australian mining town of Karratha, going to school in Bunbury, south of Perth, riding dirt-bikes with her parents, who raced them competitively, across a similar landscape.

“I got very emotional when we were driving in, because the sun was setting and I haven’t been in Australia for three years and haven’t been in the bush for years: a fucking kangaroo went past and the sky was a bit purple and I was like hrrrrr [she makes a noise that suggests holding back tears]”. She smiles, buzzing from playing to an enthralled crowd – not to mention seeing her sister for the first time in three years. Amazingly, this tour’s actually the first time she’s DJed in her home country, having first set her sights on London when she was in a psych band. 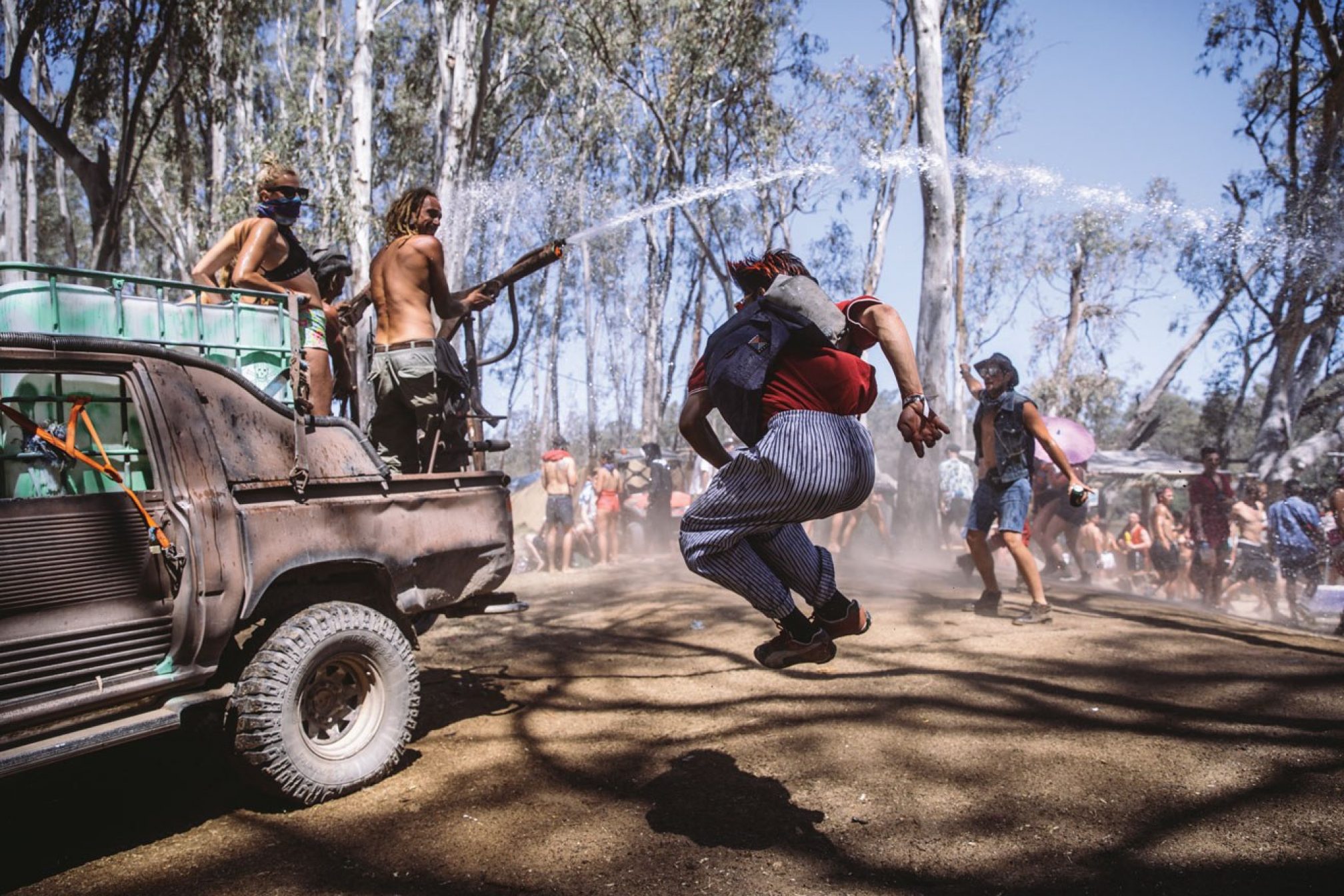 But 10 years ago, when ‘Strawbs’ was born in front of 1,000 people at a Scout camp across the border from the spot where 8,000 festivalgoers now descend, you wouldn’t have heard the former Phonox resident’s psych-tinged techno – or music from any of the big names the festival later brought to the bush.

Down an uncertain phone line from the site the week before its 10th anniversary in November, Strawberry Fields co-director Tara Benney tells Mixmag that the event has changed in every way since its early, psytrance-centric days.

“[Psy-trance] was never really the music we were the most passionate about, it was just the one that everyone associated with doofs,” she says. “It was like, ‘psy-trance equals doof’, and vice versa, because of the way the culture kind of kicked off in Australia. But now we’ve completely eliminated it, which is quite ironic – partly because the group of us who book the line-up just aren’t really into that music any more, we’ve kind of moved on, but also I think that scene in Australia has taken a bit of a sad direction and it’s just not something that we were interested in promoting any more.”

Benney mentions long-running events Earthcore and Maitreya, both cancelled amid controversies and painful refund struggles in recent years. But it seems that out of those ashes, the scene is now perhaps stronger, with a stack of newcomers in the past couple of years including Hardware Group and Carl Cox’s Babylon, and the more European aesthetic of Pitch from Melbourne promoters Novel and Untitled Group, this explosion creating a move towards the mainstream, with centrepiece Rainbow Serpent more popular than ever.

But with that shift comes a new wave of people less mindful or caring of their impact on the environment and the waste-conscious ethos at the core of the scene. Vision Hound’s Chi Wow Wah Town, which raises money for MS Australia, protects its vibe by staying small at a capacity of 2,000, and offering tickets first to those who have been before and a plus-one, before releasing them to the public. Danielle Erdeli, who runs the event and company with Ewan Scott, aka Uone, says that the doof scene has definitely changed after becoming mainstream. “We feel like bigger isn’t always better, and it doesn’t harness the same kind of people and the values that we like to have with people who come to our events. I think it’s maybe not changed for the better, it’s probably changed for the worse, with the whole corporate mainstream incentive being the driver of some of the key newer players in the scene.” 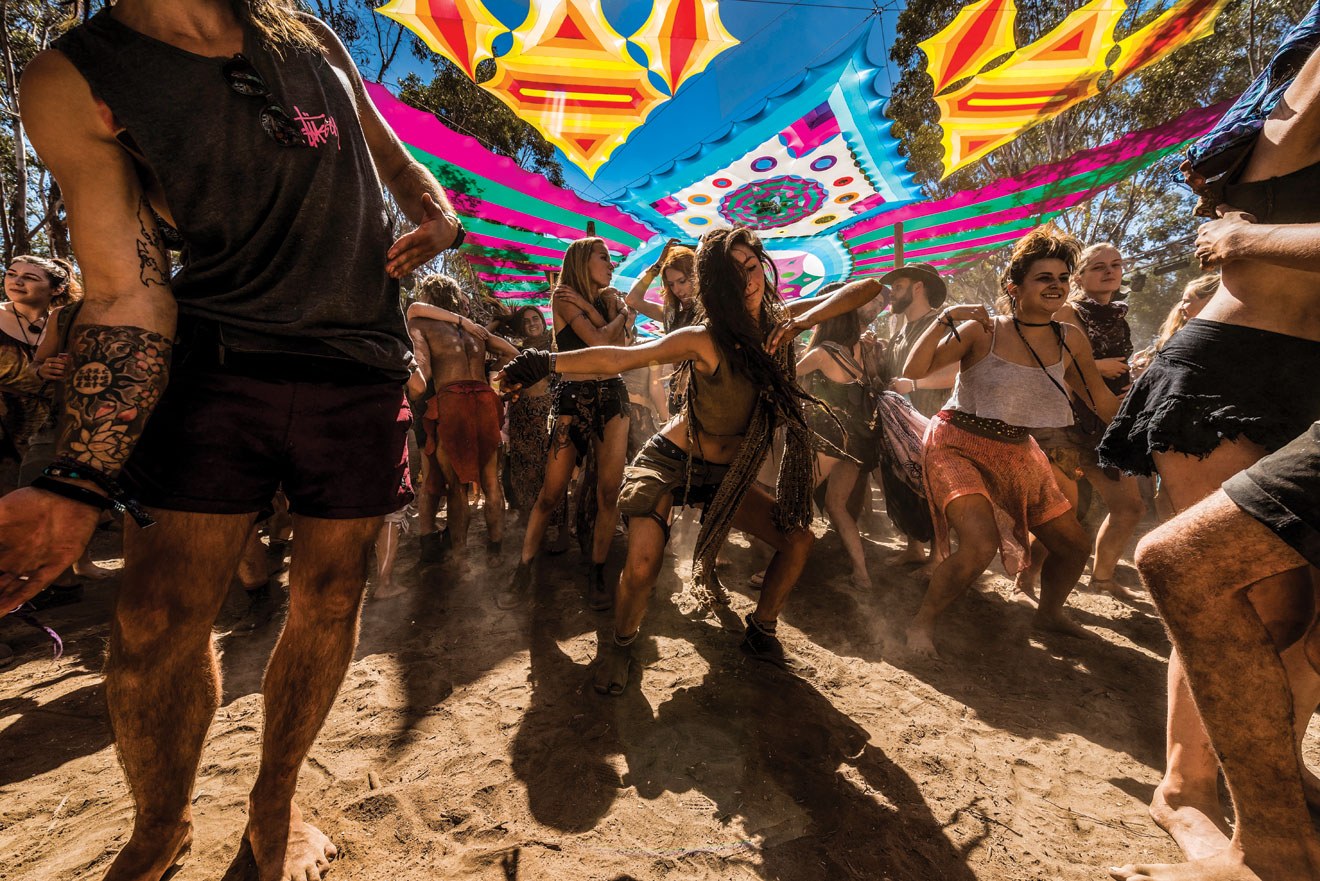 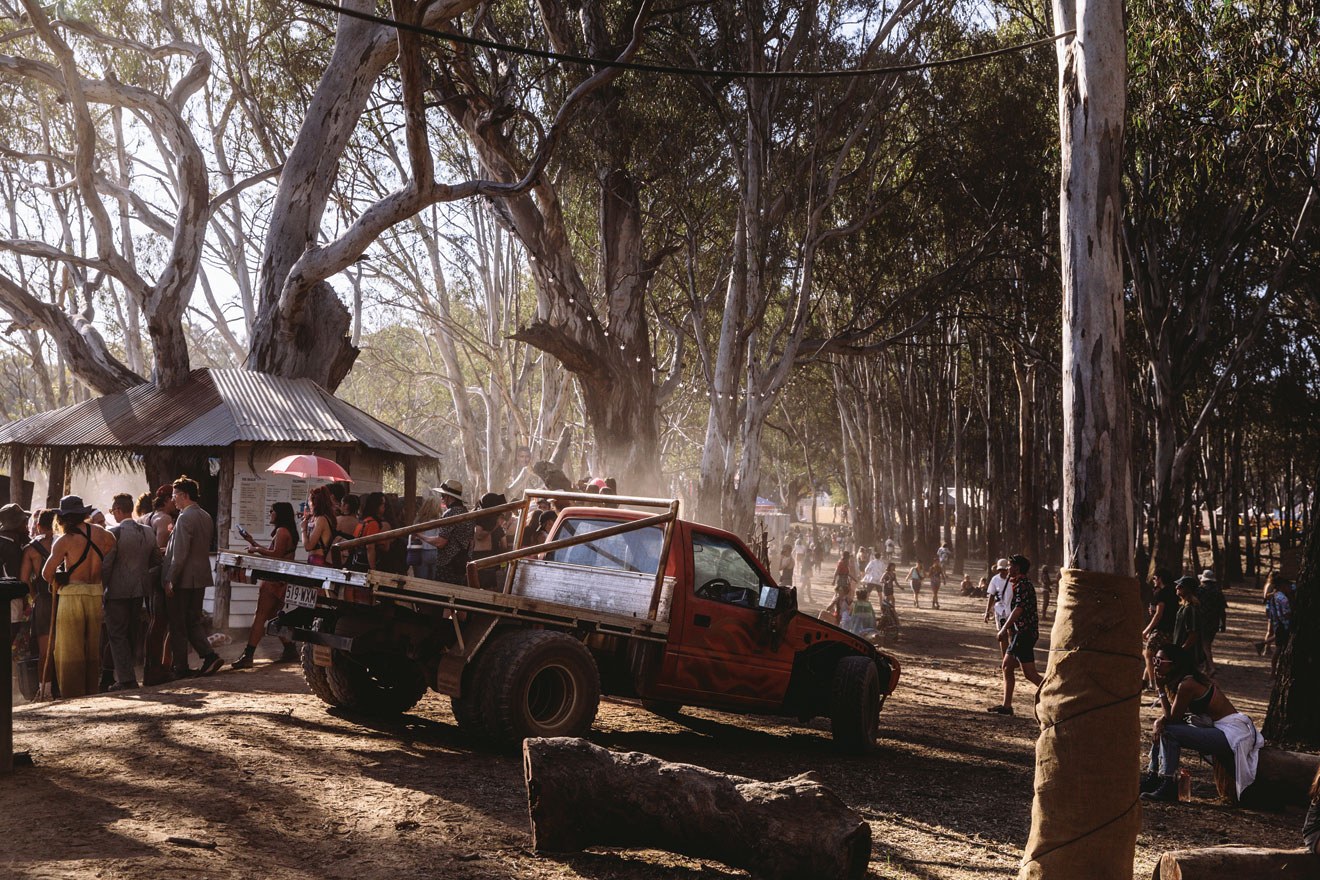 A scene exploding in popularity and being pulled towards the mainstream is perhaps just reflective of dance music generally over the past decade. But here it’s heading in the right direction, and has a clear focus on not repeating others’ errors.

When Mixmag calls Sam Goldsmith, festival manager of two-year-old Esoteric, held in the same area as the failed Maitreya, we’re surprised to hear a ‘G’day’ in a rural accent having expected to hear a Melbourne promoter down the line. Goldsmith lives in Donald, about three hours north-west of Melbourne, where the festival attracts about 3–4,000 to his family’s farm; he works in the grain industry and runs a sound and lighting company on the side, which serviced other local doofs before he saw an opportunity post-Maitreya. Goldsmith is determined not to follow that event’s path, which saw drought-affected locals fighting hard but ultimately in vain against the local council’s decision to deny Maitreya a permit; to that end, he’s making sure all the right boxes are ticked, and “could not fault the punters” of its first years.

Back at Strawberry Fields’ final day, the mid-afternoon sun beats down through a pastel rainbow canopy on the main stage as a sprinkler system turns the weekend’s dust into streaks that run down re-energized ravers’ bodies.

“It’s a pretty amazing day today,” Melbourne’s CC:DISCO! tells the crowd from a palm-fringed stage. “I’m going back-to-back with someone you don’t know. It’s my dad, Harold! Give it up for Harold – he’s a farmer from down the road, so he’s lovin’ this shit today.” She’s joking about the back-to-back part, but her dad emerges in a wide-brimmed hat, sunglasses and striped polo, and surveys the kaleidoscope of outfits and ‘doof stick’ totems in front of him.

Afterwards, we’re still buzzing on the long journey home to smooth roads, mobile service, warm showers and Uber Eats. But back by the river, the dust is settling, and once again the locals are waiting for the rain to fall on the bush.